Back to Godhead > Devotees > Demigods > Brahma, Visnu, Siva — Misconceptions About “the Hindu trinity”

Clearing up some misconceptions about “the Hindu trinity” 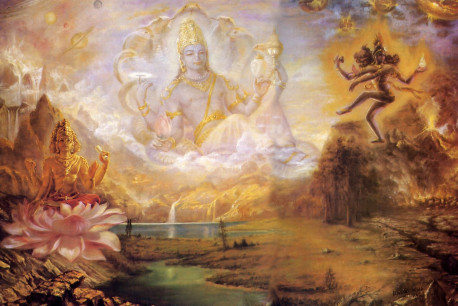 The three interesting-looking persons depicted here are Brahma, the world-creator, Visnu, the world-maintainer, and Siva, the world-destroyer. Perhaps you’ve heard them characterized in that very misleading cliche of introductory World Religions texts as “the Hindu trinity.” And perhaps you’re simply inclined to dismiss them as the fanciful projections of a primitive mythologizing imagination run riot. But, if you go to the proper sources, the venerable Vedic texts Bhagavad-gita and Srimad-Bhagavatam, you’ll find Brahma, Visnu, and Siva accurately explained in the context of an exacting and comprehensive account of God and His creation, an account that is unrivaled in completeness and coherence by any other philosophical, scientific, or religious literature, and that is not only intellectually satisfying but also aesthetically captivating and spiritually fulfilling.

Krsna’s main energies are three. His internal energy is manifest as the transcendent spiritual kingdom; His external energy, as the temporary material world. His marginal energy is comprised of all living creatures, the individual animate souls. Souls are “marginal” because they can dwell either in the spiritual kingdom, serving Krsna in bliss and knowledge, or in the material world, forgetting Krsna in darkness and suffering. The Sanskrit word for the soul is jiva (“living entity”), and the marginal energy is also called jiva-tattva, the category of the jiva.

Brahma is the controller of nature in the mode of passion; he is the engineer who creates the universe. Every universe has its Brahma, who appears as the first created being in it. Although Brahma is usually in the category of jiva, he is designated an avatara (incarnation) of Krsna because he is especially empowered with Krsna’s own creative potency. Using the ingredients furnished by Krsna and following Krsna’s blueprints, Brahma constructs the material universe, and then he begets the offspring, called Prajapatis, whose descendants populate all the planets.

Visnu, who controls nature in the mode of goodness and sustains the creation, is directly the Supreme Lord. In the spiritual kingdom of God, where everything is everlasting, the quality of goodness exists without either passion or ignorance. Therefore it is appropriate that Visnu personally controls this quality even in the material world, where it becomes bracketed by ignorance and passion.

Siva, the lord of the mode of ignorance, devastates the universe at the end by his wild, all-annihilating dance. Siva is a personal expansion of Krsna, not a jiva, yet because he comes into intimate contact with the quality of ignorance and with matter (which is innately ignorant), you cannot receive the same spiritual restoration by worshiping him that you do by worshiping Krsna or Visnu. Siva is therefore given his own category, siva-tattva.

Srimad-Bhagavatam (2.7.39) sums it up like this: “In the beginning of creation there are penance, myself [Brahma], and the Prajapatis, the great sages who generate; then, during the maintenance of the creation, there are Lord Visnu, the demigods with controlling powers, and the kings of different planets. But at the end there is irreligion, and then Lord Siva and the atheists full of anger, etc. All of them are manifestations of the energy of the supreme power, the Lord.