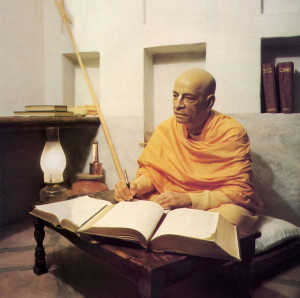 He finished more than half the work, but then he passed away. It was his life’s work—a full translation of Srimad-Bhagavatam, the ripe fruit of Vedic knowledge, with an elaborate commentary. It was to have been sixty volumes. Twelve cantos, translated from ancient Sanskrit into modern English for the benefit of the modern world.

He finished nine cantos, and then, at the age of 80, his health failing, he embarked on the tenth. He had begun the work in 1960, in India. Now he was reaching its essence—the Tenth Canto, the description of Krsna’s pastimes. But in 1977, in Vrndavana, the place most sacred to Lord Krsna, His Divine Grace A.C. Bhaktivedanta Swami Prabhupada passed away from this world. And his great literary achievement, his momentous work of translation and commentary, lay still unfinished. His dictaphone, with which he’d dictated a final chapter even while on his deathbed, would never be used again.

But now he was gone. And what would become of his work?

In his final days, Srila Prabhupada told us he wanted the work to go on. A Sanskrit-knowing disciple should finish the book. Not only that, but it should be done richly, in depth—each verse should have a full, satisfying explanation, or purport. He had given his Bhaktivedanta purports in the volumes he had finished. And now the purports should continue. But a year passed or more, and no one seriously took up the work.

Then one of Srila Prabhupada’s closest disciples, Srila Hridayananda dasa Goswami, thought of putting himself to the challenge. He had never formally studied Sanskrit—but he knew the Sanskrit basics, he had something of a genius for languages, and he thought he could learn whatever he still needed to know. And most important, he had been studying Prabhupada’s books for the past thirteen years and working devotedly in Srila Prabhupada’s service. So he felt that by following in Srila Prabhupada’s footsteps he could take on the task.

He discussed the idea with Srila Prabhupada’s other leading disciples. The work would be difficult—from a material view, almost impossible. To master classical Sanskrit, pore through the commentaries, and render the text into English—it could take decades. But he was enthusiastic, and they were hopeful. So in 1979, at the yearly meeting of Srila Prabhupada’s senior devotees, the movement’s Governing Body gave Srila Hridayananda Maharaja their blessings : Yes, he should take up the work.

Hridayananda Maharaja threw himself into Sanskrit. For many years, his main service had been as a front-lines organizer and preacher, actively spreading Krsna consiousness. In the early 1970’s , when the Krsna consciousness movement had had nothing much going in Latin America, Srila Hridayananda Maharaja had moved in and started twenty-five Latin American centers for Krsna. He had put together two entire publishing companies to translate Srila Prabhupada’s books into Spanish and Portuguese and get them printed and into people’s hands. And all the while he had traveled and preached, without letting up.

Over the years, as the movement in Latin America had flourished, Hridayananda Maharaja had handed over to other devotees the management of the Hare Krsna centers. Now he was directly managing only the centers in Brazil. But by now there were nearly a dozen, and that in itself was a full-time job.

On top of all this, Srila Hridayananda Maharaja was one of the select group of senior disciples chosen to begin the work of initiating more disciples after Srila Prabhupada’s departure. By 1979, he was the spiritual master of over seven hundred disciples, all of them depending on his guidance for their progress in spiritual life. 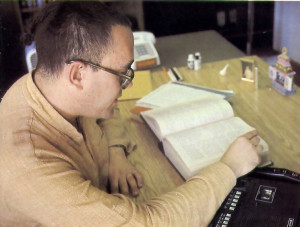 Within a year, he was linguistically sure in what he was doing. Now he felt at home with the Bhagavatam in its original Sanskrit, and with the Sanskrit commentaries as well. And, more important, because he was following Srila Prabhupada, he could clearly understand the spiritual ideas that are the essence of what the Bhagavatam is all about. He was ready.

So in 1969, while still working on the Third Canto, he had gone directly to the Tenth and written a summary of the entire canto—Krsna, The Supreme Personality of Godhead. (“The Krsna Book,” he usually called it.) Here he presented the full account of Krsna’s pastimes, following the Bhagavatam verse by verse, all the while melding in his own comments, helping the reader understand the transcendental nature of Krsna’s divine and mysterious activities. Unlike the rest of Prabhupada’s Bhagavatam, the Krsna Book took the form of a straight narrative, without the elaborate Sanskrit-English format for each verse. Yet the book was complete in itself; by reading this book, one could come to understand Krsna and relish His sublime pastimes.

The Tenth Canto, then, was already available. So Hridayananda Maharaja decided to begin with the Eleventh. Then he would proceed to the Twelfth, the final canto, and finally return to the Tenth Canto for an in-depth verse-by-verse presentation. This would complete Srila Prabhupada’s great work.

And now the first volume has appeared, to the applause of devotees and academic scholars alike. This is Dr. Alex Wayman, Professor of Sanskrit at Columbia: “It is indeed gratifying that the monumental work on the Srimad- Bhagavatam by the late lamented Bhaktivedanta Swami is being completed with the same splendid standard by his devoted and trained students.”

And Dr. Shaligram Shukla, Professor of Sanskrit and Linguistics at Georgetown University, Washington, D.C.: “They have translated each verse with clarity and directness, and with the same authenticity and power as before. The commentary is comprehensive, penetrating, and illuminating.”

And devotees have been overwhelming in their appreciation. Some devotees had been frankly skeptical. “The work should be completed,” they’d thought, “but personally we won’t be so interested in reading it. We’ll go on reading Prabhupada’s books, and the other books can just roundout the set.” But when they read the first volume their hearts changed. Although this was not directly Srila Prabhupada’s writing, it was so faithful to Prabhupada’s style and spirit, and so rich in insight gained from the commentaries, that devotees felt completely satisfied: Srila Prabhupada, by his mercy, was giving Srila Hridayananda Maharaja the power to continue the Bhagavatam as he himself, Srila Prabhupada, would have desired.

And this in fact was Srila Hridayananda Maharaja’s desire. “Our intention,” he writes in his Preface, “has been always to serve faithfully the lotus feet of our spiritual master, carefully trying to translate and comment exactly as he would have, thus preserving the unity and spiritual potency of this edition of Srimad-Bhagavatam.”

It is Srila Hridayananda Maharaja who gives the new purports their ultimate shape. From the wealth of Sanskrit comments, he carefully chooses the most important ideas, to help the readers best understand the rich meaning of the text.

To give the reader further help, he also weaves in relevant comments Srila Prabhupada himself has given in other portions of the Bhagavatam. And occasionally he adds his own practical insights, derived from his wide experience as a Krsna conscious preacher.

The result? A work that is authentic, scholarly, enlightening, eminently lively, and a joy to read. And most important of all, it is a work of pure devotional service, a work meant to please Srila Prabhupada, who dedicated his life to giving Srimad-Bhagavatam to the world. “Our present insignificant attempt,” writes Srila Hridayananda Maharaja, “is simply to complete his translation and commentary, and we are constantly praying for his guidance so that this work can be completed exactly as he would have desired.”

Srila Hridayananda Maharaja is certainly receiving Srila Prabhupada’s transcendental guidance and blessings. Because of his faithful dedication to fulfilling Srila Prabhupada’s desires, we can eagerly look forward to seeing the entire Srimad-Bhagavatam in print and relishing in its fullness this ripest, most nectarean fruit of the tree of Vedic knowledge.