Back to Godhead > ISKCON > Gurukul > Gurukula — The Culture of the Soul

Gurukula — The Culture of the Soul

The sweet atmosphere and natural beauty of ISKCON’s Mayapur school is a source of inspiration for students.

Rama-prasada’s father earns ten rupees (eighty-five cents) a day as a farm laborer. He and his wife live in Narasimhapoli and regularly cross the river near their home to visit their six-year-old son in the Sri Mayapur gurukula. They’re happy that Rama is studying English and other academics and is becoming a good singer. As Rama says, “If I wasn’t in gurukula, I’d just play all day until I was old enough to work with my father in the fields.” Their lives are enriched with spiritual understanding and activities like the weekly ceremonial procession and daily study. In the future, a transcendental international city will be built in Mayapur, and these students will fully use their talents and energy in creating, maintaining, and developing it.

Dilip Saraf’s father is a life member of the International Society for Krishna Consciousness (ISKCON) who owns four nylon thread factories. He and his wife weren’t satisfied with Dilip’s progress in private school, so they sent him to the Mayapur gurukula for education.

Nineteen-year-old Krsna-bhakti has been in the gurukula since 1975. His eighty year-old father is retired. Krsna-bhakti has learned fluent English and is in charge of the gurukula’s kitchen, overseeing the accounting, marketing, menu planning, and supply inventory. When he graduates next year, he plans to become either an assistant teacher in the school or an assistant manager in the temple.

Krsna-bhakti, Dilip, and Rama-prasada, as well as some ninety other boys of diverse ages, economic circumstances, and cultural backgrounds (Europe, Bangladesh, New Zealand, Australia, and North and South America), live together in Mayapur’s gurukula, a cluster of thirteen thatched-roof earth-and-bamboo cottages. The school is part of ISKCON’s Mayapur Chandrodaya Mandir complex, located near the junction of the Ganges and Jalangi rivers, ninety miles north of Calcutta. 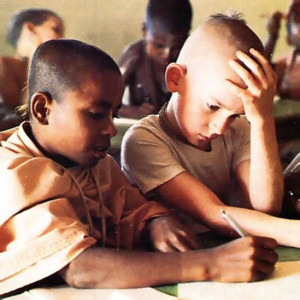 “This is a natural way to live,” Anirdesya, the school’s good-natured, lanky principal, told me as we sat on a raised earthen platform on the veranda of the cottage he shares with the older students. The sweet atmosphere and natural beauty of the cottage made me feel at home. As I peered out from where I sat beneath the low overhang of the thatched roof, I was inspired by the serene vista of lush, verdant fields stretching into the distance, bathed in the morning sunlight.

Mr. Mukherji gives a class on the Bhagavad·gita. Gurukula, “the place of the spiritual master,” trains children to become secure and successful in life by doing everything as loving service to the Supreme. Vigorous physical activity is an integral part of the students’ development.

“When you use a hand pump,” Anirdesya said, “you’ll find the water warm in the morning and cool in the afternoon. No need for a boiler, and no trouble with breakdowns. And these traditional cottages are made entirely with local materials, so they’re easy to maintain. They’re also warm in the winter and cool in the summer. We don’t need heaters or fans.” The quaint, rustic cottages were utterly practical. And quite inviting. Especially when I compared them to the cold concrete room I’d been staying in during my four month visit to Mayapur; daily I experienced aggravations from mechanical and electrical problems with the room’s modern “conveniences.” I thought, “Next time I come to Mayapur, I’d prefer to stay in a cottage like this.” 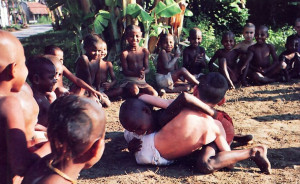 Each day they either swim, play soccer, or wrestle

“We purposely preserved this relaxed, natural atmosphere,” Anirdesya continued, “to help the children imbibe the transcendental culture of Krsna consciousness. Ours is a spiritual culture based on a devotional mood of service to Krsna. The activities of Lord Krsna’s pure devotees spring from this mood and are expressed in many art forms. 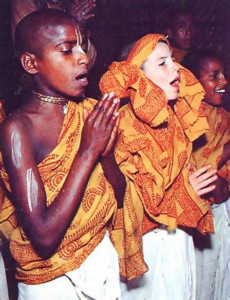 They also offer daily prayers and respect to the Lord

“Lord Caitanya taught that this transcendental culture is already within the heart of every living being. It is not artificially taught or imposed from without but must simply be uncovered, or evoked, by the purifying process of bhakti-yoga.

“To this end, each child in our school, in addition to taking standard academic courses, practices bhakti-yoga, just as Lord Caitanya exemplified in His own life. And we encourage each child to develop in his particular field of interest and to offer his activity to Lord Krsna with devotion. 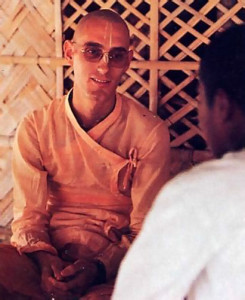 At left, Anirdesya, principal of the Mayapur school, works closely with the boys, counseling them, guiding them, and organizing their personalized courses of study.

“Everyone has a natural genius in some particular activity. You or I, for instance, couldn’t mend shoes as well as a cobbler. However seemingly exalted or lowly one’s propensity is, if it’s allowed to flourish, it gives rise to a satisfying and practical way to awaken one’s love for Krsna.”

As we sat talking, the boys kept coming to Anirdesya for their assignments mrdanga (clay drum) lessons, bhajana (devotional singing) classes, preparing for the daily fire sacrifice, cleaning, and so on. The academic term had just ended, and the boys were preparing for the thirteenth annual Mayapur pilgrimage festival, which draws hundreds of devotees from around the world. On the desk in front of Anirdesya were many sheets of paper, neatly arranged in rows. Each sheet bore a particular boy’s name, class schedule, and new duties. Gradually Anirdesya became busy counseling and directing students. 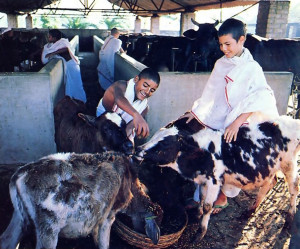 The boys are encouraged to develop their individual propensities, such as caring for Krsna’s favorite animals, the cows and calves

In the meantime, I studied the school’s course offerings and spoke to a number of students. Dilip Sarif told me how he wakes up at 4 A.M. along with all the other boys, bathes, dresses, and attends mangala-arati in the temple. After that he has time for mantra meditation and some gardening before a class in spiritual philosophy at seven. There’s- a big breakfast at eight, and from nine to twelve o’clock (during the school term), he has classes in math, Hindi, English, and natural science. By the time he washes his clothes and bathes, it’s time for lunch. In the afternoon he attends geography and history classes, has a two-hour break to play with his friends, and goes to the evening temple program. Before bedtime there’s hot milk and fresh homemade bread. On the weekends, when many guests come to the temple, Dilip helps in the gift store, and when the next school term starts in a month, he’ll be adding the management course to his schedule. While other students, like Rama-prasada, are sponsored by a devotee, and still others, like Krsna-bhakti, receive a full scholarship from ISKCON, Dilip’s parents pay for his education.

Dilip is ten years old; he’s in the primary level educational program. The secondary level, for twelve-year-olds and up, is called Varnasrama College. Varna refers to the four occupational divisions inherent within every human society: intellectuals, administrators, businessmen, and laborers (although they may not be so distinctly defined). And asrama refers to the four spiritual divisions of society: celibate students, householders, retirees, and renunciants. 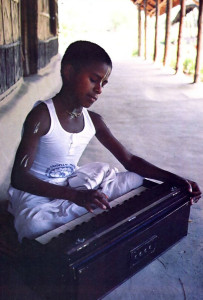 The children do that, whether alone on their cottage porch

The boys twelve and over may either continue a full academic schedule or begin vocational training. “At first a teenager will want to do everything,” Anirdesya told me. “He’ll sign up for fifty classes, and gradually, by trying them one after another, he’ll realize there are only two or three he wants to pursue seriously. Just like when we opened the martial arts course, half the school signed up for the first term. The second term the enrollment dropped to fifteen. And that’s where it has remained, because those fifteen boys are suited to it. They’re steady and enthusiastic.

“The boys gravitate toward their own specialty,” Anirdegya continued, “just as a hungry man gravitates toward food. They may not be able to analyze their psychophysical conditioning, but they find what they like to do and keep at it.” He said that he keeps an open mind about which extracurricular activities a student should take, and he’s often surprised to see a boy doing well in an activity he would have thought unsuitable for him. 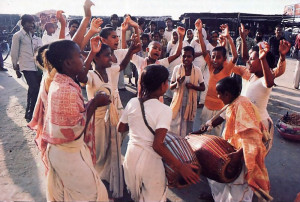 with classmates on the main street in Mayapur

The gurukula students in Mayapur are preparing for their future roles in society by performing simple character-building austerities and cultivating qualities like honesty and compassion. “This self-control, combined with varied spiritual engagements, is ideal for awakening one’s spiritual consciousness,” Anirdesya said. “In later years these students will be satisfied, because they’ll be doing what they always wanted to do for Krsna.”

Srila Prabhupada established Mayapur as the world headquarters of ISKCON and as “a world center for teaching spiritual life.” He wanted to fulfill his spiritual predecessors’ vision of a spiritual city here in the holy place of Lord Caitanya’s birth. He wanted to show the world how material and spiritual life can be harmonized for the advantage of everyone. His followers, both in Mayapur and around the world, are working toward that goal. Certainly graduates of the Mayapur Varnasrama College will have plenty of engagement in planning, constructing, and maintaining this international transcendental city.

Srila Prabhupada once noted how the Mayapur students saw all their activities—whether soccer, sweeping, or Sanskrit—as fun. He said this was the proper attitude: a devotee does any service for Krsna and sees it as transcendental recreation.

The Mayapur gurukula students I spoke with were in many ways like any other students. Some wanted to be teachers, some managers, some computer programmers, tailors, electricians, and so on (all of which will be needed in the Mayapur city). But there was one big difference: these students wanted to perfect their particular service for pleasing Lord Krsna and their guru.