Back to Godhead > Society > Religion > Christ Is Our Guru — Srila Prabhupada

Christ Is Our Guru — Srila Prabhupada

Christ Is Our Guru 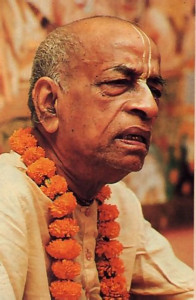 The following conversation between His Divine Grace A.C. Bhaktivedanta Swami Prabhupada and some of his disciples took place in Bhubanesvara, India, in February 1977.

Devotee: Prabhupada, you have said, “Preaching God’s message is a thankless task.”

Srila Prabhupada: Yes, just look at Jesus Christ—crucified. What was his fault? He was simply teaching God consciousness. Of course, he was not killed. Nobody can kill the Lord’s pure devotee.

Devotee: But ungrateful people tried to.

Srila Prabhupada: Yes. Such a great personality, the son of God. He wanted to deliver God consciousness. And in return, he was crucified. We don’t take Jesus Christ as insignificant. We give him all honor. He is a pure representative of God. Of course, he directed his preaching according to time, place, and circumstance, the era and region and people’s mentality. In any case, he is a pure representative of God.

Devotee: And he was able to do all his preaching in just three years, too.

Srila Prabhupada: He had so little time to preach—but still, what he did in three years is so wonderful.

Srila Prabhupada: Yes, it is not a joke. Unless Christ is God’s representative, how can he be so enduringly famous? That we know—Christ represents God.

In Melbourne, when a priest asked me, “What is your idea of Jesus Christ?” I told them, “He’s our guru.” This they very much appreciated. Christ is preaching consciousness of God. So he is our guru, our spiritual master. That’s a fact. Don’t take him otherwise. He’s our guru.

And Christ’s name—originally he was called “Jesus of the Christ.” Isn’t it so?

Srila Prabhupada: Jesus of the Father. Jesus of the Christ. And that Father, that Christ, is Krsna. Christa is simply another pronunciation of Krsna. And of course, from his teachings we can understand that Jesus Christ represents God.

Devotee: Oh, yes. What he was teaching, what he was giving to his original disciples—he gave them examples like, “The birds are not worrying about their food. And yet God is supplying all their wants. So why should you worry about your food or other needs? Simply follow God’s laws and teach others to do the same. God is feeding the birds. Do you think He will not feed you?”

Srila Prabhupada: Yes, he said that, didn’t he? That’s a fact. That is our mission: simple living and high thinking. No need for such a big bombastic economic arrangement. Depend on God’s natural economic arrangements—the earth’s produce and the cow’s milk. And the main thing, use your priceless human life for becoming God conscious.

Devotee: So Christ was a pure devotee of God, teaching devotional principles.

Srila Prabhupada: Oh, yes. Sometimes people make propaganda that Christ may have eaten fish or even meat. But even if this were true, it would only have been because nothing else was available, not because he wanted to eat such abominable things for his own personal sense gratification. If nothing else were available, what could be done?

It is not that in your America—with such bountiful grains and nuts and milk and cheese—you can keep slaughterhouses and daily kill millions of poor animals on the plea of “protein,” or “Christ may have eaten this.” That is rascaldom.

Devotee: And because it wasn’t always easy to get fresh water, people in those days used to drink a very cheap wine that was hardly alcoholic at all. Really it was just mildly fermented grape juice. They used to drink this because there was often very little fresh water.

Srila Prabhupada: Not that they made the plea, “Now we shall drink bottle after bottle of strong wine and beer and liquor and intoxicate ourselves, since Christ may have taken some grape juice.”

Devotee: Yes. Really we have a much better appreciation of Christ than some of his nominal followers …

Devotee: … because we know that we can’t just shrug him off as “God’s sacrificial lamb” and use him as an excuse to go on sinning.

Now, if the Christians want to be reformed, we can help them reform. On the basis of the Bible, we can help them reform. There is no difficulty. Most of my disciples come from the Christian group. So the Christians can reform; they can return to following God’s laws. And the Bible also recommends chanting God’s holy names—the Lord’s glories. This age is most degraded. So the best way to spiritual success and happiness live your life in the Lord’s glories.