Back to Godhead > ISKCON > Letters > New ISKCON Temple in Thailand 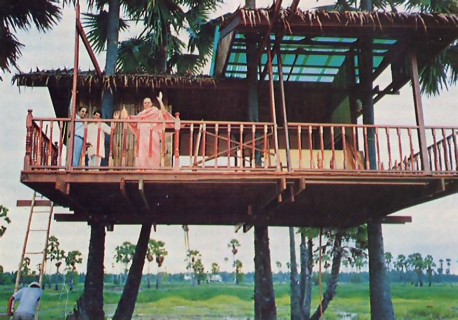 From the veranda of a tree house built for ISKCON, Srila Jayapataka Swami waves a greeting.
One of the spiritual masters in the Hare Krsna movement, he is the overseer of its affairs in parts of the Far East. 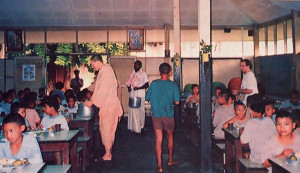 Bangkok—Hare Krishna Food for Life now makes trips to the Thai-Cambodia border here to feed Cambodian refugees. Also underway is a weekly program of food distribution at orphanages and schools.

Recently, the devotees opened a preaching center and invited Phawin Ransibrahmanakul, the head priest to the royal family, to be the honored guest. An adjunct to the established temple, the new center will serve especially as a place for dinners with businessmen, administrators, and scholars.

Devotees here are increasing their distribution of literature with the reprinting of Thai editions of Srila Prabhupada’s Beyond Birth and Death and The Golden Avatar.

Sydney—Dianne Feeney, a guest speaker at a national conference here of Catholic clergy, told the assembly that if they wanted to counteract the decline in the number of Catholics, they had better take to the streets, as the members of the Hare Krsna movement do.

Catholic leaders in Australia have expressed much concern that young people often have a negative view of orthodox faiths, seeing them as “irrelevant” and “too institutionalized.” Feeney, who is the academic dean of the Churches of Christ Theological College, spoke in favor of a new approach.

Ms. Feeney also presented findings that twenty-five percent of the Australians accept the idea of reincarnation. 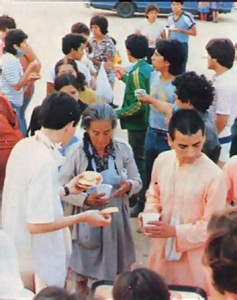