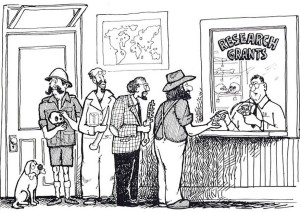 According to a recent article in The New York Times, paleoanthropology is “a science long on dramatic assertions and short on sure knowledge. Paleoanthropology draws upon the rigorous disciplines of anatomy and geology but includes so much room for conjecture that theories of how man came to be tend to tell more about their author than their subject.” In other words, science and fiction have merged. But for some time now the merger has been passed off as reality.

The Times points out that despite almost one hundred years of research in evolution, paleoanthropologists have not given us a clear understanding of man and his origins. The book Missing Links is cited: “[Modern paleoanthropologists] are no less likely to cling to erroneous data that support their preconceptions than were earlier investigators.”

The Times offers a sound explanation for the lack of scientific objectivity, explaining that “some theories attract more material support than others…. The finder of a new skull often seems to redraw the family tree of man, with his discovery on the center line that leads to man and everyone else’s skulls on side lines leading nowhere.” Despite generous funding, says the Times, “most of the evidence would fit on a billiard table.”

Aside from monetary gain, there is a more subtle reason for contrived scientific conclusions and forced conceptions of man and the universe. In Evolution from Space, noted British astronomers Sir Fred Hoyle and Chandra Wickramasinghe assert that the chances of life’s arising from some ancient random mixing of chemicals are so “outrageously small” as to be absurd “even if the whole universe consisted of organic soup.” The incensed authors are amazed that although the situation is well known to geneticists, evolutionists, and paleoanthropologists, nobody seems concerned enough to “blow the whistle decisively on the false theories.”

Hoyle and Wickramasinghe explain why: “If Darwinism were not considered socially desirable … [the situation] would of course be otherwise.” But when an entire society “becomes committed to a particular set of concepts, educational continuity makes it exceedingly hard to change the pattern.” They conclude by offering an astute observation: “You either have to believe the concepts or you will be branded a heretic.” Evolutionists thus fear that any retreat would “open the floodgates of irrationalism.” In other words, even cracking the door to the only possible alternative creation by a higher intelligence-would force scientists to face all the issues that such a conclusion implies.

Those issues are elaborately dealt with in the many books of His Divine Grace A.C. Bhaktivedanta Swami Prabhupada, founder and spiritual master of the International Society for Krishna Consciousness. Thoughtful people should fully research these books. Then it will become obvious that the popular assumption that life can be fully explained through material laws is unfounded and unscientific.

From Four Legs to Forearms

Scientists who believe in evolution despise nothing more than the suggestion that an intelligent designer could be responsible for the variety of living beings we see around us. They insist that the only logical explanation is that all living beings have developed from a common single-celled ancestor. But some of their arguments against design are transparently ridiculous.

One such argument appeared in a recent issue of Discover magazine. In words dripping with scorn, the author declared, “Careful study of living creatures reveals innumerable features that would never exist if species had been designed exnihilo, as the creationists claim…. A fish’s fin, the flipper of a penguin or porpoise, the leg of a lizard or lamb, the wing of a bird or bat, and the well-shaped forearm of Sophia Loren: each is used for its own distinct purpose, yet all share the same basic arrangement of bones.”

Comparing Sophia Loren and the fish, the author says that “there’s no way, if evolution hadn’t occurred, that her arm would have had any internal resemblance to a fish’s. The similarity of anatomy is evidence of evolution: the fish’s forelimb and Sophia’s show a common ancestry.”

How many people have read that passage and uncritically accepted this patently false line of reasoning? Perhaps many millions. But a simple truth is apparent: similarity of structures can also be taken as evidence for an intelligent designer.

Let’s consider an example. Over the past century, the first automobiles have spawned a number of offspring. There are tractors, buses, high-performance sports cars, stretch limos, military vehicles that scurry along the seabeds, and more. All of them have similar mechanical anatomies. Yet all of them were independently designed. An intelligent engineer would not find it necessary to literally reinvent the wheel every time he designed a variation of the original motorcar. So it is quite possible that God could have come up with a basic structure for a forelimb and modified it in various ways in the design of the different bodily forms.

The idea of design rather than evolution fits in well with the fossil record, which fails to show the myriad transitional forms that would lead from a fish to Sophia Loren. George Gaylord Simpson, one of the leading figures in modern evolutionary theory, noted that fossil evidence shows all thirty-two orders of mammals appear on the scene fully developed. “This regular absence of transitional forms,” he said, “is not confined to mammals, but is an almost universal phenomenon, as has long been noted by paleontologists.” Some evolutionists have made some very creative suggestions for getting around this difficulty, but all in all there is to date no compelling reason to exclude intelligent design as an explanation for the origin of species.

The Vedic scriptures of India are clear on this point. Srila Prabhupada, in his commentary on the Srimad-Bhagavatam, states, “Various types of living entities were created simultaneously at the very beginning of creation. The nonsensical Darwinian theory of evolution is not applicable here.” 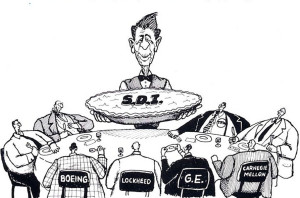 The military-industrial complex is alive and well in the United States. Experts estimate that President Reagan’s Strategic Defense Initiative program (SDI), better known as Star Wars, will spend upwards of $1 trillion to research and build a space shield impregnable to nuclear attack.

Top corporations are heroically lending a hand. For a price, of course. Boeing gets $131 million, TRW $57 million, and Lockheed $33 million for Star Wars projects this year. AT&T eagerly offered to develop a lightning-quick battle-management computer system but, to its great disappointment, was turned down. “No competitive high-tech company can afford not to be a part of SDI,” says Wolfgang Demisch, an analyst at the First Boston investment firm.

To describe the functioning of SDI, the term “military-industrial complex” is apt but incomplete. According to India’s Vedic literature, human society has four principal classes: the military class, the industrial or business class, the intellectual class, and the worker class. Lord Krsna, the Supreme Personality of Godhead, created these four classes when He created human society, so in analyzing any social phenomenon we should look for all four. In the social body, the intellectual class is the head, the military class the arms. The business class is the stomach of society, nourishing the social body by putting bread on the table. And the worker class acts as the legs of the social body, assisting the other three classes. “Military-industrial” indicates only the arms and the stomach. Aren’t the legs and head important too?

Sure enough, to make the Star Wars dream come true, SDI is counting heavily on the intellectual community for scientific breakthroughs. Thus high-tech corporations aren’t alone in scurrying for SDI dollars. Scientists from Carnegie-Mellon and eight other institutions have landed a $9 million SDI contract, and a consortium of five universities has accepted $19 million to develop a power system for space weapons. The intellectual community also has its finger in the Star Wars pie-in-the-sky.

The worker class too has vested interests. It will directly benefit from the billions of dollars pumped into the industries for which it works. An old story repeats itself: It was the heavy demands on U.S. industry made by the U.S. and Allied armed forces during World War II that finally pulled the U.S. economy out of the Great Depression, sent millions of workers back to work, and prompted Charles E. Wilson, head of General Electric, to comment in 1944 that what the country needed was “a permanent war economy.” Not to disappoint Mr. Wilson, Star Wars continues the tradition.

Petitions are circulating at many university campuses to block Star Wars research. Fifty-three physics professors at the University of Illinois have signed a statement condemning the SDI program as “deeply misguided, dangerous, and enormously expensive” and pointing out that space weapons research will only escalate the arms race.

Despite this warning from a part of the “head”—the intellectual class—the social body is charging forward into Star Wars. Much of the intellectual class has fallen for the lure of research contracts and is therefore encouraging, not warning against, space research. “The only ones who complain about money being thrown around are those who are not in the way of the money,” says astrophysicist James Jonson, an SDI staff member. Like businessmen and corporations, many professors and universities believe that the first purpose of life is to put more bread on the table, and that they must therefore compete for SDI grants to survive. The social body appears to be quite a goon: a big stomach and hardly any brains.

The Vedic literature urges the intellectual community to research the possibilities of spiritual advancement through self-realization and devotional service to the Absolute Truth, Lord Krsna, and to teach the principles of self-realization to society at large. With the consciousness of all four social orders thus directed up toward spiritual objectives, rather than down toward the stomach, the present goony social body will tend to be less gluttonous over the Star-Wars pie and more inclined toward clear-headed planning for our national security.