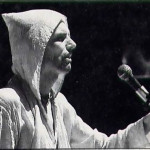 The preamble to the West German constitution contains these words: “The law is hereby formulated in responsibility before God and man.” And in the dictionary God is defined as “the supreme being, the creator, and the ruler of the universe.” So any state government is simply an insignificant part of the greater government of God. A state government that poses itself as a democracy but whose actual policy is to persecute and harass religious communities—such as ours—can hardly be civilized, cultured, or lawful. Such a society is barbaric and animalistic. It must of necessity destroy itself—and this is actually happening at the present moment here in West Germany.

If there is anything Germany is famous for, it is religious persecution. Today in West Germany, distributing Hitler literature or Hitler recordings or Hitler movies is very much appreciated, and the government never interferes. But distributing Krsna conscious literature is treated as tantamount to the terrorism of the Baader-Meinhof gang!

At the cost of thousands of marks, the State has made a huge arrangement for a trial to persecute a handful of harmless monks whose only crime is distributing knowledge and love of God in the form of literature and records. I fail to see how the public will be able to accept the shameless attempt by their state government to gag the Hare Krsna movement through extended three-year legal maneuvers and slander campaigns in the press.

It is a well-known fact that exactly three years ago, agents of this government raided our temple in Frankfurt with a mob of seventy armed police. They tear-gassed and roughed up innocent and harmless devotees. They smashed furniture and defiled the temple. They rounded up the women in a room and attempted to proposition them as if they were common prostitutes.

The Staatsanwalt arranged that the press be there, so that the newspaper propaganda to slander our name would be one-hundred-percent effective. Some twenty-five hundred newspaper articles in Germany and around the world denounced the Hare Krsna devotees as demented, brainwashed criminals engaged in defrauding the public in the name of religion. The government fabricated charges such as kidnapping, falsifying papers, and so on. Recently, the Staatsanwalt set the same lying propaganda machine in motion again to sway public opinion in his favor for the court case.

At the time of the raid three years ago, two of our leading monks were arrested and unduly detained for six weeks. They were released only when an unheard-of bail bond of 100,000 marks was put up by the Hare Krsna society. All this came about as a result of our sankirtana, or book distribution, which was supposedly conducted without the proper permission—an offense comparable to parking a car in a no-parking zone. All the society’s funds (about 700,000 marks) were frozen, and all our business connections (which were necessary for our normal functioning) were ruined by slanderous and malicious newspaper articles.

The Staatsanwalt and the criminal police kept us hanging on for two years without any information as to the future of our money and our movement. Now, three years later, the matter is coming before the court, and again the Staatsanwalt has initiated a slander campaign and filled the newspapers full of lies. The whole affair smacks of religious persecution, Nazi-style.

This Hare Krsna movement is a bona fide religious movement representing the original culture and religion of India. It will be proved in this court by documented evidence and personal testimonies of some of the world’s most respected religious and academic authorities that ISKCON is a genuine religious movement. With that evidence, the case of the prosecution will naturally collapse, because the basis for confiscating the 700,000 marks and leveling the fraud charges against members of ISKCON has all along been the unproven assumption that ISKCON is running a business for personal gain and profit.

Nothing could be further from the truth. Before being accepted as an initiated disciple, each member of ISKCON must be completely free from all addiction to sense gratification, such as meat-eating, intoxicants (including tea, coffee, cigarettes, and so on), illicit sex, and gambling. Where is the scope for personal gain?

If I ask any man in this courtroom whether he smokes, drinks, reads pornography, or eats meat, he will be found guilty on every count. These Hare Krsna boys, however, do not smoke, go to the cinema, eat meat or fish or eggs, or keep illicit connections with women. And they do not gamble. Then what do they do? From morning till night in every town and village, they preach about the holy names of the Lord. I ask you, where is the scope for criminal intent? Are you not ashamed that you are persecuting religious monks whose only intent is to teach love of God in every town and village?

The preamble to your Constitution begins, “The law is hereby formulated in responsibility before God and man.” So you, the Staatsanwalt, are a lawyer, a defender of the law. Can you say what God is? Do you abide by the orders of God? Do you even know what these orders are? If not, then what are you doing pushing forward a case in which the only issue in question is the authenticity of this religious movement, the International Society for Krishna Consciousness?

It is you who are the fraud. You pose as an upholder of laws “formulated in responsibility before God and man,” but you do not know what God is, or what His laws are. The State tries to persecute those who are actually doing God’s work and observing His laws. And it openly supports everything godless and sinful. The liquor industry, the meat industry, the gambling casinos, the lottery, Dr. Mutter’s Sex Shops—all enjoy full protection from the government, which realizes millions of marks daily in the shape of tax revenues from such sinful and degrading activities. Isn’t this fraud?

You have accused us of fraud. But only five percent of all the funds collected by ISKCON were spent for personal maintenance. How does this compare to the Red Cross, the Catholic Church, or the Protestant Church? Where is your evidence of fraud? All the money collected is still there in the bank, accounted for in the books. We are being held under false arrest! There is no evidence to support the charges.

When someone attempted to murder one of our devotees in the Berlin temple and we reported the incident to the local police, they dropped the case without any investigation. Isn’t this fraud? The same thing happened in Mainz, where someone attempted to kill one of our devotees by shooting at him from a rooftop. Nothing was done by the police. Isn’t this fraud? The same thing happened in Hamburg, where fifteen Rockers attacked our temple in the middle of the night. The local police were so busy that they couldn’t send even one officer to give us protection. But when there is an opportunity for harassment and persecution, seventy policemen with machine guns can be spared and sent to the Hare Krsna temple in the mountains outside Frankfurt, where they can mercilessly beat devotees, manhandle pregnant women, and steal our money. Isn’t this fraud? You have no idea what religion is and what religion isn’t. You don’t know the first thing about the Hare Krsna movement.

Therefore, the judges and the Staatsanwalt should be dismissed for some time with a sufficient supply of the Vedic literatures. They should study them carefully—and then reconvene and judge just what the Hare Krsna movement is.