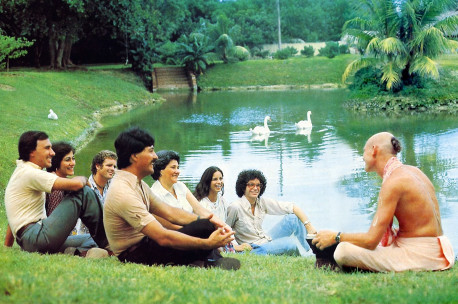 On the lawn of the Hare Krsna movement’s center In Miami, the center’s president, Narahara dasa, answers questions about chanting Hare Krsna.

Q. I’m afraid I’m a rather materialistic person. I want a compatible mate, a reasonable amount of money, healthy children, and things like that. Can I still chant Hare Krsna?

A. Definitely. Whoever you are, whatever you do, and whatever it is you want out of life, just chant Hare Krsna, and your life will be sublime.

Q. I get the feeling that if I start chanting Hare Krsna, then sooner or later I’m going to have to give something up. What’s the catch?

A. There are no hard and fast rules for chanting the maha-mantra. So you never have to give up anything. But if you’re actually serious about achieving self-realization, the Vedic literature says there are four things you should avoid: intoxicants, meat-eating, illicit sex, and gambling. These four items are material contaminations—the soul doesn’t need them at all—and if we want to become spiritually pure, we should try to get free from them. And chanting Hare Krsna makes it easy. By chanting Hare Krsna, you come directly in touch with Krsna, the supreme reservoir of pleasure. So the pleasure you taste by chanting Hare Krsna is more than enough to make the so-called pleasures of material life seem just completely insignificant.

Q. But what if I don’t want to give up these things? What if I’m not ready?

A. Then chant Hare Krsna anyway. It’s up to you. But if you’re actually serious about spiritual life, why not become ready? Why keep doing things that just get you more materially entangled? It’s common sense. If you’re trying to build a fire, why pour water on it?

Q. I’ve heard about all kinds of mantras besides Hare Krsna. Is there any difference?

A. We don’t even have to talk about so-called mantras like “VROOSH” and “ZING.” But you may have come across some of the thousands of authentic mantras that appear in ancient India’s Vedic literature. As this same literature explains, the Hare Krsna mantra is more powerful than all the rest combined, and in this age it’s the best mantra for bringing you complete self-realization. So you can understand why it’s called the maha-mantra, “the great mantra.”

Q. I’ve read about plants responding to sound. If you chant Hare Krsna, does it have any effect on them?

A. Yes. A great spiritual master named Haridasa Thakura once said that the maha-mantra benefits even lower life-forms, like plants. All living beings (plants included) are actually spirit souls. It’s just that they’re wearing different kinds of bodily garments, depending on how much they’ve developed their consciousness in past lives. Plants have a comparatively undeveloped consciousness, but if you expose them to the sound of the maha-mantra, that will restimulate it. But mainly, the maha-mantra will develop your consciousness. It’s already much more developed than the plants’, and if you use it to chant Hare Krsna, then when this lifetime is over, you’ll be ready to return to the spiritual world.

Q. Does the Hare Krsna mantra improve your self-awareness?

A. Yes. It acts much the way an alarm clock wakes you up from a dream. For instance, when you’re asleep you might think you’re a king living it up at your palace, or a skindiver being eaten alive by a shark—but when the clock goes off, “Wait. I’m really John So-and-so.” And you know you were just dreaming, because it only lasted a few minutes and then it was over. Now, the thing is, the feeling of being “John So-and-so” is only going to last sixty or seventy years, at most, and then it will be over, too. So what is it but a long, drawn-out dream? People spend lifetime after lifetime as “John So-and-so,” “Bill Such-and-such,” and on and on. But the “self they’re aware of is just a temporary body in a temporary situation—just a dream. If you want to enjoy complete self-awareness and wake up to your inner self, even within this lifetime, then you can chant the maha-mantra. The sound of Krsna’s names keeps you aware of who you really are: a spirit soul, part and parcel of the Supreme Spirit, Krsna.

Q. Can chanting Hare Krsna help me to see God?

A. Yes. Actually, the only reason we can’t see God now is that our hearts are covered over with “dust.” This dust is our ignorance—the misconception that we are the body, and that we can be happy only by enjoying material pleasures. But when we chant Hare Krsna, we’re in immediate contact with God, because He’s nondifferent from His name. This spiritual contact thoroughly cleanses the dust from our hearts. We realize that we’re not the body, and that only by associating with Krsna can we be truly happy. It is then—when we’re fully purified—that Krsna reveals Himself to us, just as the sun reveals itself to us through a clean window.