A Society Without Brains — Srila Prabhupada Speaks Out

On a Society Without Brains 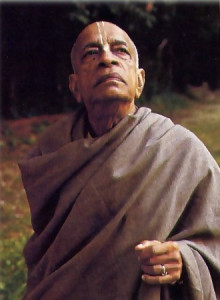 The following conversation between His Divine Grace A.C. Bhaktivedanta Swami Prabhupada and Raymonde van den Heuvel, of the International Labor Organization, took place in Geneva during the summer of 1974.

Van den Heuvel: I work for the International Labor Organization, which is a part of the United Nations family. We’re concerned with the protection and welfare of all laborers in practically all nations in the world.

Van den Heuvel: We want to see that the laborers have their proper share in society’s economic rewards.

Srila Prabhupada: But my point was that if you neglect the head of society, then in spite of your attention to the legs, things will not go very nicely—because the brain will not be in order.

Van den Heuvel: But this is also an important aspect of society, don’t you think? We aim to improve the lot of the workers of the world.

Srila Prabhupada: In America the laborer class is very highly paid, but because they are not directed by a brain, by an intelligent class, they simply spend their money on drinking.

Van den Heuvel: The fact that a good thing is abused doesn’t make it bad.

Srila Prabhupada: The point is that everyone should be guided by the brain. That is the only way to organize society. What is the value in working hard like an ass, without any intelligence?

Van den Heuvel; You can’t force a man to use his brain.

Srila Prabhupada: Therefore, the United Nations should support a class of ideal intelligent men who will act as the brain of society and guide the others so that everyone becomes happy.

Van den Heuvel: I think you’ll find that in every society throughout the world there is a priestly class, a class of philosophical leaders.

Srila Prabhupada: Priestly class! The Bible says, “Thou shall not kill.” But the priests have amended this to suit their own whims. They have sanctioned killing by allowing thousands of huge slaughterhouses for killing innocent animals. How can such so-called priests guide? I have asked so many Christian gentlemen and priests about this: “Your Bible teaches, ‘Thou shall not kill.’ Why are you violating this commandment?” They give me vague answers. They have not even taught the people what is sinful. That means a lack of brains in society.

Van den Heuvel: My organization is not directly concerned with people’s brains.

Srila Prabhupada: Your organization may not be directly concerned, but if human society is brainless, then no matter what organizations you make, people will never become happy. If people are not taught by the intelligent class of society how to discriminate between pious and sinful activities, then they are no better than the animals.

Van den Heuvel: Of course, when you speak of the distinction between pious activities and sinful activities …

Srila Prabhupada: They see no such distinction anymore. But in our Krsna consciousness society, I instruct my students from the very beginning to avoid sinful activities. They must give up completely all meat-eating, gambling, illicit sex, and intoxication. And now just compare their character and behavior with anyone else’s. Even the Christian priests are surprised. They say, “These boys are our boys. How is it that before joining your movement, they never came to church, but now they are mad after God?” In the streets, people ask, “Are you Americans?” You see. Everything can be rectified by proper guidance. But if there is no brain in society, you can manufacture so many organizations, but people will go on suffering. Thai is nature’s law: if the people are sinful, they have to suffer.

Van den Heuvel: I don’t think that you can expect an international organization to indoctrinate people …

Srila Prabhupada: Why not? It should be international—everyone. The United Nations is meant for international activity, so our proposal is that the United Nations maintain an international organization of first-class intelligent men to act as the brains of society. Then people can be happy. But if you want to keep the hands and legs working without direction, without a brain, then you will never be successful.

Van den Heuvel: You know, I think of myself as a servant of mankind, with a view toward helping people to understand one another and the world a little better, I’m trying now to organize workers’ education programs . ..

Srila Prabhupada: But please try to understand, I’m stressing on the point of society’s brain. If there is no ideal class of men, if the brain is not in order, then any amount of education or organization you do will be unsuccessful. The United Nations is an organization for all human society, but they have no department which can actually be called the brain organization.

Srila Prabhupada: That is my point.

Van den Heuvel: We are only servants of the leaders of our member states. If Mr. Nixon and all the other heads of slate don’t have brains, then I’m afraid the United Nations can’t do anything to give them brains.