Back to Godhead > ~Featured~ > Killing the Demons Of Talavana Forest

Killing the Demons Of Talavana Forest

It was a sweet-smelling, fruit-filled forest,
but the demons threw terror into all who came near.
Except Krsna and His brother. 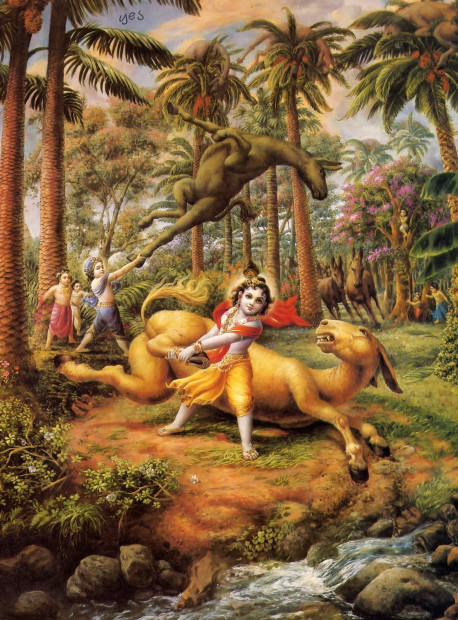 Fifty centuries ago, in the north Indian village of Vrndavana, Krsna the Supreme Personality of Godhead played just like a cowherd boy. Yet there were times when He performed wonderful, superhuman activities.

One day, as usual, Krsna went into the forest with His elder brother Balarama and His cowherd boyfriends, and on the way He played His flute. Vrndavana forest was full of buzzing bees, blooming flowers, and well-laden fruit trees. There were songbirds and clear lakes with waters that could relieve any kind of fatigue. Sweet-flavored breezes refreshed body and mind. When Krsna saw all the trees overloaded with fruit and bending down toward the ground as if to welcome Him, He was pleased and started smiling. At times, for Krsna’s pleasure, the boys imitated the sound of the swans or the dancing of the peacocks, and Krsna also imitated the dancing and made His friends laugh.

When the boys got tired, they would sit down and rest. Balarama would place His head on the lap of one of the boys and take a nap, and Krsna would massage Balarama’s legs or fan Him with a palm frond. While Balarama was resting, the other boys would dance or sing or wrestle among themselves, Instantly Krsna would join in the fun, and He would laugh and compliment His friends on their prowess. When Krsna fell tired, He would lie down with His head pillowed on the root of a big tree or the lap of a cowherd boy. Then some of the boys would massage His legs, others would fan Him with large leaves, and a few of the more sweet-voiced boys would comfort Him with beautiful songs. It didn’t lake long for Krsna’s fatigue to go away.

But as it happened, on this particular day a problem emerged, and some of the boys came to Krsna and Balarama to tell Them about it.

“Dear Balarama,” they began, “You are very powerful; Your arms are very strong. Dear Krsna, You are very expert in killing all kinds of disturbing demons. Will You kindly note that just near this place there is a big forest called Talavana. This forest is full of palm trees, and all the trees are filled with sweet, ripe fruit. Some of the fruit is already falling, and some is still in the trees. It is a very nice place, but because of a great demon named Dhenukasura, it is very difficult to go there. No one can reach the trees to gather the fruit.

“Dear Krsna and Balarama, this demon is present there in the form of an ass, and he is surrounded by similar demon friends who have assumed the same shape. All of them are very strong, so it is very difficult to get near this place. Dear brothers, You are the only persons who can kill demons like these. Other than You, no one can go there, for fear of being killed. Not even animals go there, and no birds are sleeping there; they have all left. Only from a distance can we appreciate the sweet aroma that is coming from the Talavana forest. It appears that up until now, no one has tasted the sweet fruit there.

“Dear Krsna, to tell You frankly, we are very attracted by this sweet aroma. Dear Balarama, let us all go there and enjoy the fruit. The aroma of the fruit has spread everywhere. Don’t You smell it from here?”

Desiring to please Their smiling friends, Krsna and Balarama walked toward the Talavana forest. When They arrived, Balarama yanked the trees with the strength of an elephant and shook all the ripe fruit to the ground.

Upon hearing the sound of the falling fruit, the demon Dhenukasura rushed toward Balarama with great force. The whole forest trembled, and the trees quivered as if there were an earthquake. With his hind legs Dhenukasura started kicking Balarama in the chest. At first Balarama didn’t say anything, but the angry demon kept kicking Him harder and harder. Suddenly Balarama grabbed the demon’s hind legs with one hand and whirled him around and around so fast that he lost his life.

Then Balarama threw Dhenukasura into the biggest palm tree in the forest, and the demon’s heavy body toppled it down onto the trees nearby. It looked as if a powerful hurricane had struck. All the trees were crashing down, one after another. Yet this extraordinary show of strength wasn’t particularly astonishing, since Balarama is Lord Krsna’s primary expansion.

Now all Dhenukasura’s friends came together and attacked Balarama and Krsna. The asses were set on avenging their cohort’s death, but Krsna and Balarama grabbed all of them by the hind legs, whirled them around, and threw them into the palm trees. The asses’ dead bodies made a panoramic scene; it appeared that clouds of various colors were floating in the treetops. At once the demigods from the higher planets showered flowers on Krsna and Balarama, beat their drums, and offered devotional prayers. A few days after the killing of Dhenukasura, people began coming into the Talavana forest to gather the fruit. Animals returned without fear and started feeding on, the lush grasses that grew there.

On arriving back in Vrndavana village, the cowherd boys told everyone how Krsna and Balarama had killed the demons. When the gopis (the young cowherd girls) saw Krsna coming home—a peacock feather on His head, His face smeared with the dust of the cows—they were. overjoyed. Whenever He was away, they were morose. All day they would think of Him playing in the forest or herding His cows in the pasture. But now that they saw Him coming home, their moroseness vanished, and they looked at His face the way bees hover over the honey of the lotus flower. The young gopis smiled and laughed, and Krsna played His flute and enjoyed their lovely, smiling faces.