Back to Godhead > Society > Religion > Thinking About God For A Change

Thinking About God For A Change

Thinking About God For A Change 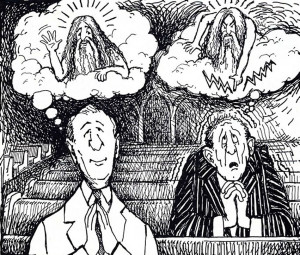 “Despite the current conservative movement, images of God are in flux,” says Wade Clark Roof, a sociologist at the University of Massachusetts. After a recent study conducted by the National Opinion Research Center, Roof analyzed the results of a survey concerning people’s images, or concepts, of God. Respondents were presented with twelve images—creator, father, judge, king, master, liberator, redeemer, friend, lover, healer, mother, and spouse—and asked, “When you think of God, how likely are each of these images to come into your mind?”

From his analysis, Roof found that traditional, parental, and authoritative images were the ones most often selected. Creator was the most prominent image, chosen by eighty-two percent of the more than fifteen hundred respondents. Yet Roof believes that people’s images of God are becoming “more individual, intimate, and softer.” The image of God as friend was indicated by sixty-two percent, and almost half of the respondents said they sometimes imagine God as lover.

“People are reaching out for more personal images of God,” says Roof. And from the viewpoint of the Vedic scriptures of India, this inclination can be considered quite natural. Since we are all persons, we require personal relationships. And a personal relationship with God provides one with an eternal and unbreakable companionship, one that continues forever, under any circumstance.

Surprisingly to Roof, many conventionally religious persons chose “more personal, less traditional, and softer” images of God. Obviously, this implies that traditional images of God are not “soft.” But a Krsna conscious person recognizes that any understanding of God that does not include His personality, or “softness,” is incomplete. An impersonal, limited image of God will never satisfy the mind of one who is truly religious.

From the Vedic scriptures we learn that the actual image of God is complete in every respect. God is not a concept subject to our imagination. Nor is He bound by any of the inebrieties that accompany every mortal’s capacity to conceive of Him. Yet He is a person—the supreme person. Quite clearly, the roles of creator, liberator, and so forth directly imply an intelligent person who is performing these roles. But who is God, and which roles does He perform?

The Vedas assert that God, being omnipotent, manifests Himself through an unlimited variety of roles and activities. Yet although He executes all the functions of universal administrator, He remains situated above the universe. The universal manifestation springs from His creative potency, yet He remains separate from this manifestation as the Supreme Potent. And in His topmost feature as Sri Krsna, He engages in a countless variety of loving relationships with His pure devotees.

The Vedic literatures, specifically the Bhagavad-gita and Srimad-Bhagavatam, inform us of the innumerable functions and aspects of the personality of Godhead. They teach us that there is, so to speak, a feature of God for everyone. For those who desire to visualize God as friend, Krsna is suhrdam sarva-bhutanam, the best friend of everyone. For those who prefer to see God in a parental role, Krsna explains, aham bija-pradah pita: “I am the seed-giving father of all living beings.” And for anyone who, upon hearing these descriptions, comes to understand the actual truth of God’s glory, Krsna promises, “He does not take his birth again in this material world but attains to My eternal, spiritual abode.”

Can Karma Be Killed?

Roswell Gilbert’s wife was seventy-three and suffering from Alzheimer’s disease, One day Mr. Gilbert ended his wife’s life by firing two nine-millimeter bullets through her brain. Now seventy-five-year-old Gilbert has a new problem. A Florida jury gave him a one-way ticket to the state penitentiary. He’ll be eligible for parole after his one-hundredth birthday.

Some people are outraged that Gilbert was sentenced. They claim that he simply abbreviated his wife’s suffering. Why should he not go free and thus further reduce the suffering in the world? Others, however, worry about the potential abuse of mercy killings for motives of selfishness or convenience.

What are the Vedic answers to the questions posed by euthanasia? Why was Mrs. Gilbert suffering in the first place? Did death end her suffering? What is the just reward or punishment for Mr. Gilbert’s deed? How can suffering be avoided or stopped?

The real cause of suffering was described thousands of years ago by sages such as Maharaja Rsabhadeva and Sri Prabuddha. They explained that people who consider material enjoyment to be the goal of life perform all kinds of sins. Their desire is to enjoy, but ultimately they suffer.

People don’t realize that their past sins have created their present suffering. They constantly endeavor to eliminate their unhappiness and to increase their pleasure, but due to ignorance they invariably obtain the opposite result. Their happiness vanishes, and as they grow older, their suffering increases.

Suffering is the just reaction to our past misdeeds. We know that when a person breaks the law, he is subject to punishment. So it is also when one breaks God’s laws. Although it is sometimes possible to avoid the laws of man, no one can escape the laws of God.

Mrs. Gilbert was suffering from “bad karma” created by previous sins. Mr. Gilbert’s intention was to end his wife’s suffering, but instead he simply caused her suffering to be postponed until her next birth. Because of ignorance, the net result of Mr. Gilbert’s action was an immediate increase in his own misery, with worse to come. Ignorance of the stringent laws of karma always results in suffering.

Intelligent persons should learn about karma and how to escape it through studying the science of bhakti-yoga, or devotional service to Krsna. Devotional service not only destroys the reactions due us because of our past sins, but it uproots the selfish, material desires that would ordinarily implicate us in future sufferings. This is the art of karma-free living and the eternal path of liberation from the bondage of suffering and repeated birth and death. 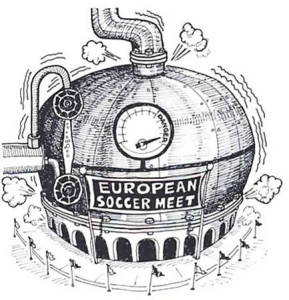 The tragic violence that left nearly forty dead at last spring’s European Cup soccer final in Brussels stands to remind us of the powerful control material nature exerts over us. In the fourteenth chapter of the Bhagavad-gita, Lord Krsna describes how material nature’s three features, or modes (goodness, passion, and ignorance), bind and control us.

Highest is the mode of goodness (sattva-guna). Its characteristics are knowledge, peacefulness, purity, and freedom from material desire. Next is the mode of passion (rajo-guna), which exhibits the characteristics of attachment, uncontrollable desire, hankering, and intense endeavor for prosperity and sense gratification. And last is the mode of ignorance (tamo-guna), characterized by madness, indolence, and sleep. This mode is very dangerous, because it can rob us of the ability to discriminate or to comprehend the results of our actions.

Considering all this, it becomes obvious that the Liverpool and Juventus supporters had not come to the Heizelstadium to celebrate the mode of goodness. No! Passion ruled the day.

The fans had traveled a long way and had paid a lot of money. They wanted their team to win. They felt powerful in their numbers. The rival team and its supporters were the enemy. The enemy had to be defeated.

Now, the mode of passion is not always bad. After all, men influenced by this mode have built beautiful cities and have made many wonderful discoveries and inventions. They have produced masterpieces of art and music and have done so many great things. But the mode of passion does tend to be unstable. It could be compared to a high-pressure boiler. As long as certain control valves are working properly, the expansive heat and pressure can be contained and directed toward useful work. But if the control system breaks down, the result can be explosive. Similarly, unchecked passion is a frightening thing. The mode of passion, therefore, should always be kept under the control of a higher mode.

For example, in the ideal Vedic society, the kings, soldiers, and other passionate men were always submissive to the instructions of the brahmanas, who were situated in the mode of goodness. Since the brahmanas were endowed with foresight, forbearance, and transcendental knowledge, they could counterbalance the impulsiveness and passion of the martial class. Thus they guided the ambitious rulers of society to channel their passionate natures for the good of everyone.

But when the mode of passion is allowed to fall under the influence of the mode of ignorance, the result is always disastrous. Consider again the scene at that soccer match.

Many of the spectators at the game had been drinking. And of all the routes into the dark depths of ignorance, intoxication is perhaps the quickest and easiest. Passion thus turned into fury, and many ordinary people began behaving like madmen. Deadly missiles were hurled. Iron railings were torn down and used as clubs. One “spectator” was even photographed firing a pistol into the crowd.

If the mode of passion mixed with the mode of ignorance can create such mindless violence over a simple soccer match, imagine the kind of violence people are capable of over larger issues.

The nations of the world are now armed to the teeth, and matters far more serious than a European Cup final are at stake. Unless people learn how to avoid the lower modes of nature, especially the mode of ignorance, we will surely have disaster on a scale that we can now scarcely imagine.

The magnitude of the task of educating and elevating human society is obviously enormous, but the means are within our grasp. The main footholds of the mode of ignorance—intoxication, animal killing, perversion, indolence, and so on—have to be eradicated. And at the same time, the principles of goodness—such as sense control, cleanliness, and truthfulness—should be promoted. Human beings must understand that the aim of their lives is to become Krsna conscious and go back to Godhead.

For a society to become free from the degrading and dangerous influences of passion and ignorance is definitely not easy. But the Bhagavad-gita and the maha-mantra (Hare Krsna, Hare Krsna, Krsna Krsna, Hare Hare/ Hare Rama, Hare Rama, Rama Rama, Hare Hare) are there to help us. We must shake free of the degrading influence of the lower modes of nature and give spiritual realization a chance.