In September of 1965, the founder and spiritual master
of the Hare Krsna movement arrived in America.
One of his first disciples commemorates this momentous occasion. 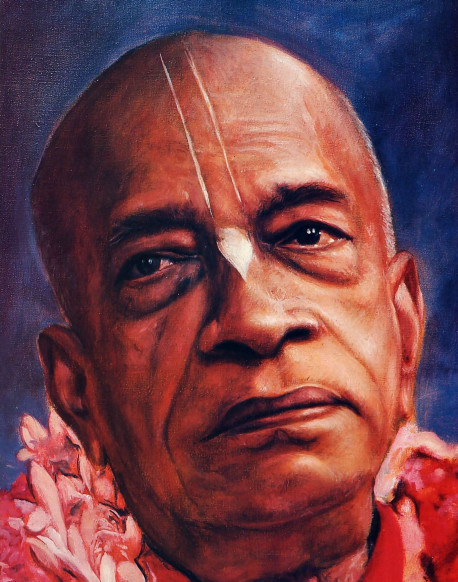 Please accept my humble obeisances. One of my fondest recollections of you is of how you were always uncompromising. During the late 1960s, for example, many of the young people around you were influenced by antiwar sentiments. Nevertheless, you explained that war was not always bad. A pure devotee of the Lord, you said, knew that wars were sometimes necessary (like the Battle of Kuruksetra) and that wars will always be with us, just as they always have been.

You also insisted that intoxicants could have no spiritual value. And you refused to grant dispensations about what we could eat: “Krsna doesn’t take any [chocolate], so we cannot offer it.” You wouldn’t accept less than sixteen rounds and four regulative principles from your initiated followers. * [*A11 initiated disciples take a life-long vow to chant the Hare Krsna mantra daily. As they chant, they count each mantra on their strand of 108 “japa beads”—108 mantras equals “one round.” They vow to chant a minimum of sixteen rounds. The devotees also vow to follow four regulative principles: no meat-eating, no illicit sex, no intoxication, and no gambling.] You presented the Fifth Canto of the Srimad-Bhagavatam (which differs radically from modern scientific theories about the universe) unadulterated. And you admonished your unjustly accused disciples to go into a New York courtroom and speak so straightforwardly that we quickly won the case.

You got your own example from Srila Bhaktisiddhanta Sarasvati Thakura. “For my part,” you said, “I have taken up the policy of my spiritual master—no compromise. All these so-called scholars, scientists, and philosophers who do not accept Krsna are nothing more than rascals, fools, and the lowest of mankind.” You offered Krsna consciousness exactly as it is, without watering it down to quickly win more followers.

Long before, in India in 1922, the words of your beloved spiritual master directed you on your life’s mission. You humbly doubted whether you were fit to come to the West with the message of Krsna consciousness; you thought of yourself as a young householder with so many responsibilities. But you never compromised that order, never changed it, never forgot it. For a lifetime you prepared to carry it out. By its power you journeyed through the material world, untouched by materialism, “as a lotus leaf is untouched by water.” By your uncompromising determination to carry out the order of your beloved spiritual master, you achieved the blessings of Lord Krsna and in turn shared those blessings with everyone.

So it was that in 1965 you with your uncompromising spirit arrived upon our shores, eager to bring us the teachings of Krsna consciousness. The message you brought had already descended through five thousand years of disciplic succession from Srila Vyasadeva, the original compiler of the Vedas. And five hundred years ago that message had been personified by the life of Lord Caitanya, who inaugurated the Hare Krsna movement.

Yet when you arrived in America, we had no way of knowing of that momentous occasion, or in great joy and anticipation we would have crowded that pier in Boston, tearfully welcoming you and thanking you for coming to save us, for we were already compromising our very lives on the altars of sensuality, speculative philosophy, and materialism. We didn’t know you had come to fill the vacuums in our hearts: there was no announcement, no notice, no fanfare of fireworks, bands, and twenty-one-gun salutes. (Even if there had been, it would still have been inadequate.)

You arrived in a different splendor, clothed in glowing saffron robes, most unusual for the West. And your arrival went unnoticed by the spiritually sleeping giant, America, somehow chosen to be your unknowing host and the birthplace of a spiritual movement destined to command the course of history. Even you yourself did not know for certain the future of your mission.

In Boston, after a brief visit to U.S. Customs, you returned to that small cargo vessel, the Jaladuta, to continue the final leg of your journey to New York City. On board you wrote a prayer to Lord Krsna, petitioning His mercy to make your words pure enough to penetrate our hearts with His transcendental message and to liberate us from all unhappy conditions of life.

Your prayers were all answered, Srila Prabhupada. The uncompromising purity of your words is being understood all over the world, as we distribute your books and recordings and incessantly repeat what you have taught us. Your teachings constantly reverberate in the hearts of your followers as living conscience, inspiration, and shelter.

You, Srila Prabhupada, seated on the vyasasana (the seat of Vyasadeva, the compiler of the Vedic literature), personally gave us Krsna’s purifying association in the form of the Srimad-Bhagavatam, illuminated by your Bhaktivedanta purports. We honor you, because you uncompromisingly represented Vyasadeva. From the vyasasana you spoke only the Absolute Truth.

Thank you for teaching us not to be compromising, Srila Prabhupada. By your incessant blessings, may we always remain uncompromisers, like you.