Lord Caitanya, eager to extend His mercy to all classes of men, left His family to dedicate Himself to the greater family of the world. 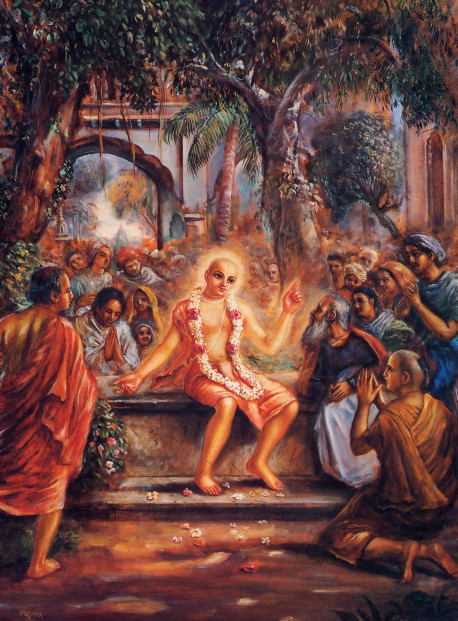 When the news spread that Lord Caitanya had left His home and family affairs and come to the house of one of His intimate associates in Santipura, hundreds of townspeople came to see Him.

Continuing a special series of articles commemorating the five-hundredth anniversary of Lord Caitanya’s appearance in Mayapur, West Bengal. By His life and teachings. He inaugurated the Hare Krsna movement.

At the age of twenty-four, Lord Caitanya took sannyasa, the vow of renunciation. Nimai Pandita (as the Lord was known before sannyasa) had become the most popular and influential person in Navadvipa, Bengal, and He was widely renowned for His scholarship and for His great devotion to Lord Krsna, the Supreme Personality of Godhead. He had a lovely, devoted wife, the goddess of fortune herself, and a widowed mother who loved Him more than her own life and depended completely upon Him. Why, then, did He leave His household responsibilities to enter the renounced order?

In the Lord’s biography Sri Caitanya-caritamrta, Krsnadasa Kaviraja Gosvami describes how Lord Caitanya appeared in this age of quarrel and hypocrisy to elevate the fallen souls above the duality of happiness and distress and bring them to the highest level of spiritual realization, unalloyed love of God, and that the Lord’s entering the renounced order—in which one vows to curtail all association with women, end all involvement in worldly affairs, and live as a mendicant—was one method the Lord employed to accomplish His mission.

Sri Caitanya-caritamrta describes that even before Lord Caitanya took sannyasa, He and His associates, out of their intense desire to relieve others from the suffering of material life, “broke into and plundered the storehouse of love of God.” After becoming utterly intoxicated with divine love, they distributed love of God, Krsna consciousness, freely in all directions, irrespective of the recipients’ caste or creed.

The Lord and His associates, being completely free from material attachments and illusion, were uninhibited by social conventions. They congregationally chanted the holy names of the Supreme Lord—Hare Krsna, Hare Krsna, Krsna Krsna, Hare Hare/ Hare Rama, Hare Rama, Rama Rama, Hare Hare—publicly in all parts of Navadvipa, crying, laughing, and dancing in great ecstasy, appearing to the unenlightened just like madmen. Thus they inundated all of Bengal and its neighboring areas with prema-vanya, a flood of love of God. Young men, old men, women, and children were swept up in that flood of spiritual ecstasy. And the Lord and His associates, seeing the amazing effects of Krsna’s divine name on the fallen souls, became filled with transcendental pleasure.

There were, however, exceptions. Certain groups of persons were very expert at avoiding the Lord’s flood of mercy. One such group was the impersonalistic monists, who eschew any expression of devotion for God. Rather than consider themselves servants of the Lord and His devotees, they proudly claim to be as good as God. Another group was the selfish materialists, who think life is meant for gratifying the senses. There were also the false logicians, persons who use their intelligence to justify aims in life other than the pursuit of self-realization. And there were blasphemers, nondevotees, and the arrogant members of the student community. All these rascals somehow managed to avoid the inundation of love for Krsna.

Some of these inimical persons formed a coalition and leveled trumped-up accusations against Nimai Pandita. The Lord could understand that their envy and sectarianism were keeping them from appreciating Krsna consciousness, what to speak of taking it up. As long as He remained within a particular family or community, He concluded, people prone to envy and sectarianism would think Him sectarian also, and His mission of spreading Krsna consciousness would not be completely successful. Thinking in this way. He resolved to renounce His family, His wife and elderly mother, and dedicate Himself to the good of the greater family of the world.

In other words, although one generally enters the renounced order late in life, Lord Caitanya did so at age twenty-four, just to facilitate His mission of delivering the fallen. He lived in a cultured society, one in which persons who could control their senses, give up sex desire, and restrain the feverish spirit of material enjoyment were admired, respected, and honored by those who were attached to material life. Knowing that He lived in such a society, the Lord decided to trick the ones who were evading His mercy by taking the vow of renunciation.

Leaving home before sunrise one morning, Nimai Pandita journeyed to Katwa, where Kesava Bharati, an ascetic in that town, initiated Him into the sannyasa order, giving Him the name Krsna Caitanya. As a result of His ploy, the Lord attracted the attention and gained the respect of those who had been inimical to Him. Thus He drew them all into the ocean of love of Krsna, and they too joined in the congregational glorification of the Lord’s divine names, diving and surfacing in an ocean of transcendental bliss.

The members of the Krsna consciousness movement, the modern followers of Lord Caitanya, are sometimes criticized for their renunciation of mundane family life and materialistic values. These critics consider mundane morality, achievements of mundane distinction, and the accumulation of material goods and facilities to be essential for keeping one’s prestige and credibility as a responsible member of society. Indeed, they consider such things to be the topmost goal of human life. One of their strongest criticisms, rooted in a longstanding fundamental dichotomy between spiritualists and materialists, is that Krsna conscious devotees are not concerned enough about humanistic values and ameliorating the plight of humankind.

Materialistic people usually consider the practitioners of Krsna consciousness weak-minded sentimentalists who opt for spiritual life as a means of escaping from, rather than coping with, life’s responsibilities. It is very rare, therefore, for a materialist to appreciate that Lord Caitanya was extremely concerned about the problem of human suffering. Yet that concern is the very reason He chose to appear as maha-vadanya avatara, the most merciful incarnation of God. He wanted to teach a positive alternative to disease, old age, and death, and all the other horrors of this material world, to which even the most powerful and successful materialists must sooner or later succumb.

The person who fakes the time to study the life and precepts of Lord Caitanya Mahaprabhu will learn that He specifically took to the renounced order not to escape responsibility but to fulfill the most vital responsibility of alleviating the suffering of humanity. He taught that the only source of unhappiness for an advanced devotee in Krsna consciousness is to see the suffering and anxiety of others. The Lord wanted, therefore, to teach by His example that we should completely dedicate our lives to para-upakara, working selflessly for the benefit of others. Thus, by His vow, He formally declared that He had no ambition to fulfill but to seek the well-being of others. And He instructed all His followers to adopt this same mentality.

Like any true devotee of God, Caitanya Mahaprabhu did not prescribe material solutions to the problems of life; He knew they would never work. Unlike the humanists, He had no sentimental notions about making a permanent arrangement for happiness in this material world. He taught that this material world is, by its very nature, temporary. Consequently no problem, no solution, no war, no peace, no happiness, no distress, no ideology, no nation—nothing in this world can last forever. This is the insurmountable law of nature. But the immaterial soul within the body is eternal and by constitutional nature blissful. The frustrations and anxieties of life are primarily due to our futile search for permanent satisfaction within the ever-changing, temporary material world.

Out of His mercy, the Lord wanted to give the frustrated souls of this world a permanent solution to the problems of life. He wanted to give them an eternal body, eternal senses, an eternal abode, and eternal, blissful relationships with Himself and His pure devotees. He wanted all the fallen souls to join Him in the spiritual kingdom of God, and toward that end He prescribed the simple and sublime life of Krsna consciousness, especially the congregational chanting of the holy names of the Supreme Personality of Godhead, Krsna. This practice purifies the heart and liberates the soul from the illusion of accepting the body as the self. It awakens the soul to his forgotten identity as the eternal servant of Krsna and brings freedom from the cycle of repeated birth and death.

Vain materialists do not realize that there is no other lasting solution to life’s problems and trials. Their futile attempts to end the recurring social, political, and economic problems of the world, as well as their efforts to stop disease, old age, death, and natural disasters, are like blowing on a boil to stop it from hurting. The blowing soothes temporarily, but it does not cure. The cure is to lance the boil and squeeze out the infection.

Sri Caitanya Mahaprabhu taught that the solution to the manifold sufferings of humanity isn’t the “boil-blowing,” patchwork schemes of various social, economic, and political ideologies. The solution is to extricate ourselves from the material world altogether and return back home to Godhead. This is the realistic teaching of Lord Caitanya Mahaprabhu, and it was to teach this practical message that He took the vow of renunciation.

Though in retrospect we can appreciate Lord Caitanya’s kindness, at the time, His wife and mother and many of His friends were greatly saddened to see Him leave home. The same was true about Lord Jesus Christ, who left home at the age of twelve to fulfill his life’s mission. Similarly, there are numerous instances throughout history of great devotees who met with opposition when they wanted to renounce the world and dedicate themselves completely to the devotional service of God. From Lord Caitanya’s example we can learn that, regardless of how much we may achieve in this material world and regardless of how much opposition we meet from family and friends, we must eventually leave it all behind and fully embrace the greater family of man by preaching Krsna consciousness.

After the Lord renounced His home and social status. He went to Santipura, near Navadvipa, to the house of one of His intimate associates, Advaita Acarya. When the news spread that Nimai Pandita had taken sannyasa, hundreds of friends and admirers came to see Him. He was dressed in the garb of a sannyasi, a loincloth and a simple outer covering. His head was clean shaven, and in His hands He carried a sannyasa stick (danda), a symbol of His vow, and a kamandalu (a mendicant’s waterpot).

Sacidevi, the Lord’s mother, also came to Santipura to see Him for what she was certain would be the last time. Upon seeing her beloved son in the simple dress of a renunciant, she felt mixed emotions of pain and pleasure. Falling at Saci’s feet, the Lord begged her permission to go to the holy land of Vrndavana. After consulting with Advaita Acarya, Saci requested her son to go instead to Jagannatha Puri, in the neighboring state of Orissa, because she would more easily get news of Him from the devotees going back and forth to that holy town. The Lord agreed, and a few days later He traveled on foot to Puri, from where He headed His mission for the remaining twenty-four years of His manifest pastimes on earth.