Back to Godhead > Krishna > Lord Caitanya > Every Town and Village 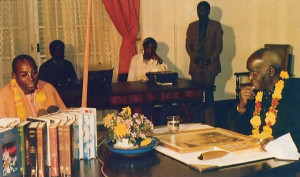 During the dinner at the State House, President Kaunda expressed appreciation for the Krsna consciousness philosophy, which stresses the spiritual identity of all living creatures, not superficial, sectarian differences based on race, language, religion, and so on. Zambia is a neighbor of South Africa and is much affected by the conflict there.

The President was particularly interested in the idea that the soul lives on after the body, and in the Hare Krsna movement’s emphasis on self-sufficiency. Srila Bhaktitirtha outlined ISKCON’s plans to develop farm communities and cottage industries throughout the country. 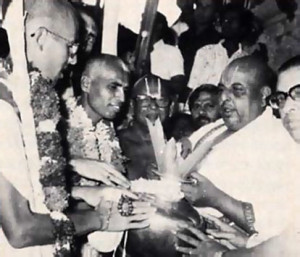 Lord Caitanya taught that the best means of spiritual realization in Kali-yuga, our present troubled age of quarrel and hypocrisy, is harinama sankirtana, the congregational chanting of the holy names of God. Spreading this message. Lord Caitanya traveled widely in Tamil Nadu. The pada-yatra is following in His footsteps, visiting places He visited 475 years ago.

After Madurai, the pada-yatra traveled to Sri Rangam, where Lord Caitanya had spent the four months of the rainy season in the year 1510. Here the priests and the chief executive officer of the temple offered the pada-yatra an especially warm and festive welcome. The priests, strict followers of the great acarya Sri Ramanuja, escorted the pada-yatra devotees into the sanctum sanctorum for a special close darsana (viewing) of the Ranganatha Deity and offered them garlands and prasadam of the Deity. From Sri Rangam the pada-yatra came to Tanjavur.

The pada-yatra devotees are members of ISKCON; thus they are devout followers of His Divine Grace A.C. Bhaktivedanta Swami Prabhupada, ISKCON’s founder and spiritual master, who spread the teachings of Lord Caitanya and the chanting of Hare Krsna all over the world. Although many members of the Society are non-Indians born in non-Hindu families, temple priests throughout South India welcome them as respected followers of the Caitanya Vaisnavite tradition.

From Tanjore, the pada-yatra will go on to Kancipuram, Madras, Tirupati, Jagannatha Puri, and finally Sridhama Mayapur, the birthplace of Lord Caitanya, in West Bengal. There, in March 1986, the pada-yatra members will gather together with thousands of devotees from around the world and an estimated half million Indians to celebrate Lord Caitanya’s glories on the five-hundredth anniversary day of His appearance.