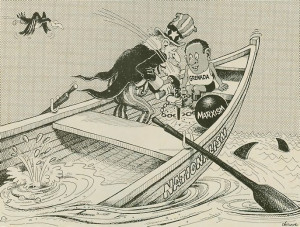 The American invasion cum “rescue” that catapulted the tiny island nation of Grenada into world news headlines last fall affected my life considerably. Now, for as long as I live, I may never again be greeted by vacant looks when I have occasion to tell someone I’m from Grenada. Now everyone knows about the island—its location, size, population, and national language. They also know that it’s pronounced Gre-nay-da and not Gra-nah-da. This may not seem like much, but I consider it a boon. From now on my life will be easier, at least when I apply for visas or go through immigration checks. But there’s another aspect of the Grenada invasion that is of far greater significance. In fact, its magnitude is almost inestimable. Let me explain.

Many of my friends, knowing I was born and educated in Grenada, solicited my thoughts on the recent political strife there. Usually they would ask whether I was critical, as they were, of America’s intervention in the internal affairs of my country. A few of them were curious to know if I was glad that Grenada had been saved from Marxism and from Cuban-Soviet expansionism. I explained that I had not taken any side in the matter. But I also explained that I nevertheless felt a mixture of anguish and joy over the episode. Anguish I felt because the Grenada issue was symptomatic of the nescience that divides the people of the world into conflicting parties and checks the progress of human society toward peace. But I felt joy at having been freed from such nescience.

Of course most people have a deep-rooted love for the country of their birth. Many men have achieved “immortality” because of the heroic feats they performed in the name of home and country. The Japanese, for example, used to consider it glorious to die for the emperor. Every nation has its slogans, heroes, and customs around which their patriotic pride revolves. And every nation has its Stars and Stripes Forever, its Deutschland, Deutschland Uber Alles!” In Grenada it was, “Isle of Spice with Everything Nice.”

I also used to be quite a nationalist. Hailing from such an obscure place as Grenada, I had to bolster my sense of identity and self-esteem with intense patriotic pride to compensate for the utter insignificance of my homeland. And had I not learned Vedic philosophy I would still be caught fast in the grip of that illusion.

The Vedic philosophical system teaches that at the core of our patriotic zeal is the false assumption that we are our bodies. Because we assume the body to be our true identity, the nation, state, county, city or town, street, block, building, race, and family of our birth all take on a special significance to us. We think we owe our existence to all these things, and we come to regard them as almost worshipable. But when we understand our identity as separate from the body, then all our bodily designations are clearly of little value.

According to the Vedic literature, our true identity is as nonphysical sparks of pure consciousness, eternal and sentient. Our existence and enjoyment, therefore, are not dependent upon our having a material body. As nonmaterial (spiritual) beings, we belong in the spiritual world, where Lord Krsna presides eternally as the Supreme Personality of Godhead, the object of loving service and devotion for all the eternally liberated souls. But by our independent volition, we have chosen to leave the spiritual world and sojourn in the material world, seeking an alternative to pure devotion to Krsna. Therefore we are obliged to accept a material body, birth after birth. Once incarcerated within the material body, the spirit soul forgets his original identity and mistakenly considers the material body to be himself. He then indulges in various pursuits of sense pleasure, gratifying his material senses while neglecting his true self.

When forgetful souls team up in groups—according to race or ideology—they divide and lay claim to the world, with an intent to exploit its resources. But their attempts result in anxiety, due to conflicting interests for ownership and control. The present global chess game between the capitalists and the communists, for instance, is based on such a conception. Constant rivalry creates a universal tension and deviates humanity from the real human mission, which is to return to the transcendental spiritual world.

Though forgetful souls continually voice high-sounding rhetoric about world peace, universal brotherhood, and the like, experience shows that the complete opposite is being accomplished. At the time of this writing there are at least forty-four trouble spots in the world. And as everyone is well aware, huge stockpiles of nuclear weapons are being amassed, with enough destructive might to wipe out human life on earth many times over.

It is really not very difficult to see that as long as people, laboring under a bodily conception, take sense gratification as life’s prime objective, there can be no lasting unity or peace. No collective peace means no individual peace. And how can we have happiness without peace?

In this philosophical light, we can see that the people of Grenada have not been rescued at all. No “ism” can free people from their bodily identification and bondage. The Vedic literature, however, can.

I feel very fortunate to have been rescued from the darkness of nationalism, with its underlying false assumption and consequent misguided aspirations. Rather than take sides on issues where the contenders are equally ignorant of their actual identity and purpose in life, as was the case in Grenada, I prefer to dedicate myself to the Krsna consciousness movement, which is working very hard to give transcendental knowledge to all people of all nations. In this way, I try to show my appreciation for the movement that emancipated me from the slavery of ignorance. 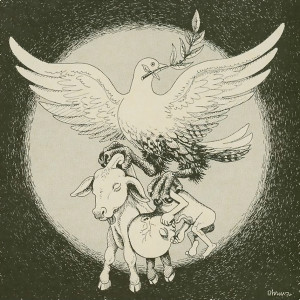 For a growing number of people on both sides of the Atlantic, the nuclear arms buildup is the issue of the eighties. Events just won’t let us forget our seemingly inexorable march toward Armageddon: A TV movie called The Day After becomes a national event and shows 100 million Americans, in graphically gory detail, what a nuclear strike would do to the people in and around Kansas City. The start of the deployment of Cruise and Pershing II missiles in Europe brings hundreds of thousands of protesters into the streets there. And the breakdown of the Intermediate Nuclear Force (INF) talks in Geneva, followed by threats of a Russian arms buildup, apparently insures an eventual U.S.-Soviet confrontation.

The Russian walkout at the INF talks especially points up what many see as the root of the nuclear crisis: the two-faced morality of leaders who talk of peace and prepare for war. The Cruise and Pershing II missiles are a bargaining chip, says President Reagan and his advisors, a response to the Russians’ deployment of SS-20 missiles that threaten all of Europe. If NATO doesn’t deploy the new missiles, the argument goes, the Russians will see us as patsies and walk all over us—and the nuclear war will become more likely. Therefore, in the interests of peace we have to install the missiles, while, of course, continuing the peace talks in Geneva.

But critics of this two-faced morality argue that from the start it worked against the interests of world peace by linking disarmament talks with armament policy. The INF conference, they say, was thus reduced to a mere cosmetic gesture, a futile charade acted out mainly to allay the darkest fear of a jittery world. What is that fear? That perhaps the superpowers aren’t at all serious about peace. Perhaps they actually mean to have a war. What other conclusion can we draw as new weapons continue to be rolled out and mounted upon launching ramps on both sides of the Iron Curtain?

The nuclear arms buildup reveals only the tip of the iceberg of the two-faced morality that pervades our modern civilization. In basic and cruelly honest language, although we dress ourselves up nicely as sophisticated men and women and speak the pious platitudes of civilized formality, underneath this thin veneer lurks a pack of savage beasts who live by the law of the jungle.

We march for peace, holding hands in human chains to symbolize the linking together of the human race. We sing wistful songs that express the dreamy vision of a world united—a vision that would become reality if only a few selfish politicians weren’t making trouble for the rest of us with their terrible weapons. Yet, worldwide, we humans daily gorge ourselves on the carcasses of millions of slaughtered creatures, a feast of death that is not only savage but also unnecessary, wasteful, unhealthy, and irreligious.

But alas, the argument that our taste for the blood of innocent creatures has something to do with man’s brutality to man has long fallen on deaf ears. Such fanatic vegetarian idealism may have appealed to such fools as George Bernard Shaw, Mahatma Gandhi, Leonardo da Vinci, Diogenes, and Ralph Waldo Emerson, but it is totally irrelevant to the rest of us. Pass the roast beef, please. We are civilized!

The human animal, whose teeth aren’t designed to rip out throats, who has no claws for tearing flesh, whose digestive tract is ill-suited for meat, is nonetheless the most bloodthirsty creature of all—and the most proud of it. His crafty intelligence can devise the most tortuous twists and turns of logic to justify his cruelty.

And eating meat isn’t the end of our barbarity toward animals. In the name of medical science, researchers in vivisection laboratories deliberately torture, cripple, blind, poison, dismember, and kill thousands of helpless creatures every day. All this is supposed to advance the cause of humanity. But what is so special about the human animal that his cause should advance at the expense of so many other creatures? How is it moral to kill a chimpanzee so that we can (perhaps) better understand how to save the life of a baby? How are a chimpanzee and a baby different? Both have two arms, two legs, and a head. In many respects, a chimpanzee is more intelligent than a baby. By what right does arrogant mankind deem it humane that the top of a chimpanzee’s skull be opened while it is still alive so that electrodes can be surgically implanted in its brain?

The two-faced moralist will retort, “This is a specious argument. Everyone knows that the baby will grow up. The chimpanzee will never be anything more than a dumb animal, whereas the baby might become a scientist or a world leader.”

And what, then, of the human fetus? Can’t he also grow up to be a scientist or a world leader? If we are so concerned about the extraordinary worth of the human being, why are there 55 million abortions every year worldwide? That is more than the total number of deaths in World Wars I and II combined. In the time it takes you to read this article, some two hundred abortions will have taken place.

No matter how one dresses up this slaughter with sanctimonious phraseology, the fact remains: It is slaughter. Even the slaughterers themselves know it. A recent study published in Time shows that of the unmarried American men who arranged for their girlfriends to have an abortion, 26% secretly thought it was murder, and 81% couldn’t help feeling guilty about the child that might have been born. But modern two-faced morality rules that it is more important to give facility to men and women for unrestricted sexual enjoyment than it is to stop the cold-blooded murder of their unwanted offspring.