The Logic of the Unlimited — The Brain Behind the Creation

The Logic of the Unlimited 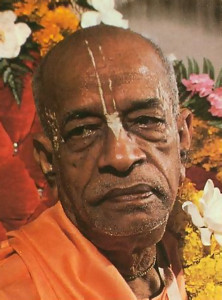 The following conversation between His Divine Grace A.C. Bhaktivedanta Swami Prabhupada and a guest took place in August 1973 at the Hare Krsna center in London.

But the scientists say that there is no artist behind the creation of a beautiful flower. Without a brain behind it, how could such a thing come into existence? But these rascal scientists do not understand. They say nature produces the flower. What is nature? Nature is an instrument, but the brain behind nature is God.

When you paint a flower with a brush, the brush is not the creator of that painting—you are the creator. Similarly, in the creation of a real flower, nature is only the brush, but the creator is God.

Guest: No two are the same, are they?

Srila Prabhupada: Yes, everything is full of variety. In one species of rose, you’ll find many varieties. And in the human species, you will find variety even between twin brothers.

Guest: And in the spiritual world, are there also varieties?

Srila Prabhupada: Oh, yes. There is unlimited ananda, or pleasure, and pleasure means variety. “Variety is the mother of enjoyment.” For example, from grain, sugar, and ghee [clarified butter] we can prepare hundreds of varieties of delicious foods. If you simply try to eat plain ghee, sugar, and grain, they will not be enjoyable, but if someone takes them and prepares varieties of sweets and then gives them to you upon a plate, you’ll say, “Oh, these are so nice.” Such a great variety of foods can be prepared from these three ingredients.

Now, just as it takes a person with a brain to combine ingredients in this world, the whole creation must also have a big brain behind it. For example, we use earth, water, and fire to make this building, this table, this chair, vase, harmonium, book—so many things. The ingredients are the same, but our brain decides how to assemble them into many varieties of objects. Similarly, this material cosmic manifestation is full of varieties, and the brain behind it is Lord Krsna. That is stated in the Bhagavad-gita [9.10]:

[To a devotee]: Read the translation.

Devotee: [Reads from the Gita] “This material nature is working under My direction, O son of Kunti, and it is producing all moving and unmoving beings. By its rule this manifestation is created and annihilated again and again.”

Guest: Would you say modern science is only materialism, Srila Prabhupada?

Srila Prabhupada: Yes. The scientists are dealing only with earth, water, fire, air, and ether. That’s all. It’s all materialism. They do not know what spiritualism is.

Guest: What makes the scientists do their work? What motivates them?

Srila Prabhupada: It is the soul. The soul is a living being with minute independence. He desires to work in a certain way, and nature supplies him with the facility. For example, earth is not man’s creation. Earth is God’s creation, a product of God’s energy. But we use the earth and mold it into various forms—pots, dolls, books, and so on. The ingredients are supplied by God, or by nature, which is God’s energy, and we simply transform them. We cannot actually produce anything. So, like God, we have creative energy, although in very minute quantity. Just as God creates the whole universe by His intelligence, we use our intelligence to create this table, this pillow, this harmonium out of God’s energy. That’s all.

Krsna explains all of these things in the Bhagavad-gita. It contains perfect information of everything. One has to study it carefully, that’s all. And you can consider the philosophy of Bhagavad-gita with your good logic. For example, Krsna says, “The material elements are My energy.” Now, consider the Atlantic Ocean, a vast body of water. It is created by God’s energy. Do you accept that? If you hesitate, what is your reason?

Guest: Well, one man says one thing, and another man says another thing. So many people have different things to say.

Srila Prabhupada: But it is a question of logic. From your body, water is produced, is it not?

Srila Prabhupada: Urine is coming, perspiration is coming. These waters are produced by the energy within your body. So why can the vast waters of the Atlantic Ocean not be produced from God’s energy?

Guest: Yes, truly they could.