When we’re surrounded by winter’s beauty and danger,
remembering Lord Krsna is both a pleasure and a necessity. 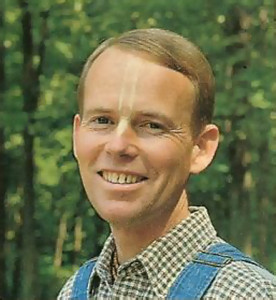 As the call echoes across our snowcapped farm, four men and two boys hop on an ox-drawn sled and head into the forest. Stripes of snow on bare branches, the silence deep and white. Winter’s woods are an ancient theater for sages seeking an audience with God. But the meditation offered here is more an adventure. Today’s revelation: Krsna’s temple needs firewood.

“Flash! King! Get up!” Vaisnava drives the oxen forward, and the sled moves easily over the trail’s snow-paved ruts and sloughs. Vaisnava tells the boys that King’s real name is Maharaja. And Flash’s real name? Flashlight.

Laughter and sunshine dance in everyone’s eyes. Then the sun goes in, and a north wind begins to blow. The breath of winter chills the devotees’ hearts and fires their souls to bring in the wood. Prabhanu thinks they can have a load down to the temple within an hour—if they don’t get stuck. The devotees hold on to the sled’s sideposts and take their places with the animals and trees as servants in Krsna’s kingdom.

“Flash! King! Gee!” The oxen turn right, “broke to the word.” As the trail winds up a steep hill, the oxen pull harder, their muscles rippling silently in the ascent. They love to pull—so massive and submissive—hauling sled and people upward to the snowy summit.

The trail narrows on top as the trees close in. The forest looks more beautiful up here. And more dangerous. The devotees duck branches as the oxen move over snow-covered rocks and stumps. The easy-loading sled rides barely twenty inches off the ground. The men jump off and walk by the oxen, who, surrounded by snow and trees, depend more than ever on Vaisnava’s strong commands. The forest will yield its fuel, but not without a struggle. 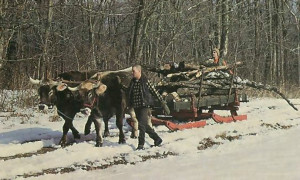 Vaisnava dasa guides the oxen over a snow-covered trail during a run to bring in wood for the temple.

The trees are mostly hardwoods—hickory, oak, beech, maple, and more—with a few pine and cedar groves. The devotees have cut selectively. Although from late fall to early spring they burn ten cords weekly, seldom do they have to cut up a whole mature tree just for firewood. Weed trees, fallen trees, and the topwood of trees cut for lumber supply nearly all of it. The Lord brings us here to gather the wood, and gives us the oxen to haul it home.

“Whoa!” The party stops in a clearing. Snowflakes appear, and branches toss against a grey sky. Logs of locust, drying for a year in the sun and wind, stand in stacks, tepee-style. Gudakesa recalls an Indian massacre. The boys, Puri and Bala, follow his finger as he points out stone ruins down in the valley.

“Farmers say the settlers’ ghosts still haunt that place. First the Indians thought this land was theirs, then the settlers, now the farmers—maybe tomorrow the developers. Seems people keep forgetting everything belongs to God.”

The boys want to hear more about the ghosts, but Gudakesa and the others start to work loading the sled. The logs are heavy, the footing uncertain. The men work in pairs, flipping extra-heavy pieces onto the bed and stacking the sled with eight-foot lengths. Locust has a straight grain, and big men like Gudakesa can split a log with one swing of the axe. The devotees load the sled to capacity and wrap the logs with a heavy chain.

“Flash! King! Get up!” Vaisnava, Gudakesa, and the boys head back to the temple with the wood, but Prabhanu and Gita stay to chop down a dead oak. The shortage of woodsmen the last couple of seasons has begun to tell. The temple is down to its last cord, the forest cutting to a few tepee stacks. To stay warm the rest of the winter, the devotees will have to hustle.

“Cut a wedge on the pond side of the trunk,” Prabhanu tells Gita. “See how the tree is leaning that way? Then make a felling cut on the opposite side about two inches above the wedge. The leader branches should have a clear fall into the snow.”

“A widow’s limb,” says Prabhanu. “Must have got caught up there last month when I felled that pine. Loose limbs like that kill lumberjacks every year. Never work in the woods alone.”

Yet the solitude of the woods draws us, Prabhanu reflects, to be with God in His kingdom. “There is another nature,” says Lord Krsna in the Bhagavad-gita, “which is eternal and is transcendental to this manifested and unmanifested matter.” As the pond reflects the oak, so nature reflects eternity. Her beauty is Krsna’s invitation to come home, her danger a warning lest we refuse. Like the trees, the bigger we are in this world, the harder we fall.

As Gita chops away, the ninety-foot oak leans farther and farther, then falls into the snow. Where a tree once stood, only silent space remains, filling with snowflakes.

“The wood’s probably down to the temple by now,” says Gita hopefully.

But it’s not. Just a hundred yards away, the sled is stuck on a big stump. Vaisnava and Gudakesa have been trying to hatchet the front crossbar free, but to no avail. The loaded sled is too heavy for the oxen to back it up. Vaisnava has another idea. He unhitches the oxen, walks them behind the load, and wraps their chain around the rear crossbar. At his command, the oxen pull the sled off the stump. Vaisnava hitches the oxen around front again. Then—snap!—the key holding King’s collar in the yoke breaks. Vaisnava whittles a splinter key and hopes it will last the trip back.

“Flash! King! Ready . . . Get up!” The oxen pull the load with their powerful necks and shoulders, the yoke creaking in the wind. Snow swirls and dashes their faces. Steaming backs humped, slaver icicles crusting their chins, the oxen lean forward, their eyes slit in concentration as they pull.

Alive to the struggle, the devotees sweat heavily inside their woolens. “Wood warms us twice,” as the saying goes. And the first warmth, when we chop the wood and team it home, is the most purifying and memorable. Industrialists have contrived easier ways for us to stay warm. No doubt. But when we let technology comfort us, do we really master nature or just juggle the struggle. After all, we still have to pay the bills. We still have to grow old. Since time is the fire in which we all burn, what better way to use our time than to work with Mother Nature and go back to Godhead? Without Krsna consciousness, a modern hearth is little more than a convenient place to die.

“Whoa!” The party stops at the cross-trails, the summit of the quarter-mile slope. Snow sweeps the hill from top to bottom. High on the right, another bough breaks loose and falls with a whistling whoosh!

“Easy, boys, easy!” Vaisnava stays in front of the oxen and eases them down the steep trail. Gudakesa walks alongside the sled, while Puri and Bala joggle up top with the wood. “Easy!” Snow—in the pulling a beauty, in the braking a beast.

Suddenly King is out of the yoke. The splinter key has snapped. King’s collar fallen in the snow. Vaisnava grabs King’s side of the yoke and starts to run downhill with Flash. Gudakesa catches King by the halter and moves out of the way.

“Haw! Gee!” Puri and Bala hang on for dear life as the sled hurtles left and right with terrific momentum. The woods seem to riot in the wind, blustering snow on the breakneck slalom. Vaisnava is a good driver, but he’s no ox. How long can he keep his balance, running down the icy ridges?

The sled has barely missed some twenty trees. Flash is having trouble turning left, and up ahead a big elm stands close on the right, where the trail turns sharply left. Before Vaisnava can give the command to turn, he falls. The sled nearly crushes him as he rolls over in the snow, hollering, “Haw! Haw!” As the sled careens toward the elm, the boys’ eyes open wide.

That evening at the temple, the Krsna Deity shines like the full moon. Locust burns brightly in the furnace, its smoke curling up to the stars.

Inside, Vaisnava sips hot milk and tells the devotees about the yoke keys that snapped and how he ran downhill with Flash. He picks up a splinter of kindling and spans it between two fingers.

“When I fell, that’s how close the sled came to running over me.”

“Amazing!” says Gita. “That’s how close the widow’s limb came to falling on my head.”

Puri and Bala, who have been listening at the keyhole in their pajamas, suddenly burst into the room.

“Amazing!” says Bala. “That’s how close we came to hitting the elm!”

“Hey, you rascals are supposed to be asleep,” says Prabhanu. “All right, Puri. What does our protector, Lord Krsna, tell us about Himself in the Bhagavad-gita”

The devotees turn in, tired but inspired. Krsna consciousness saves us from the forest of material life—a splinter’s tale of hard knocks and broken dreams—where time cuts everyone down. Heads touch pillows, and everyone falls fast asleep. The last to bed, Vaisnava points his toes towards the wood-burning stove.

“My dear Krsna,” he prays, “You are my wonderful Lord. And from this day on, I’m Yours.”