40 Years of Back To Godhead Magazine

Though the format of BACK TO GODHEAD
has sometimes changed, Srila Prabhupada’s bold presentation
of Vedic truth remains the same. 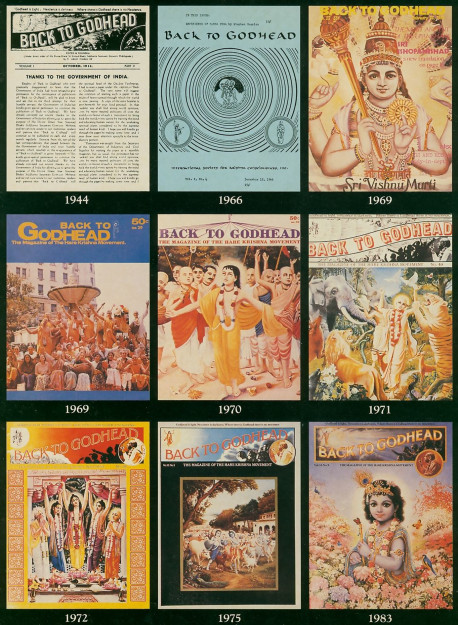 In February 1944 His Divine Grace A.C. Bhaktivedanta Swami Prabhupada published the first issue of BACK TO GODHEAD magazine. At his home in Calcutta, he wrote the articles, typed the manuscripts, and designed a logo—essentially the same logo we use on the cover of BACK TO GODHEAD today: an effulgent Lord Caitanya* [*Lord Caitanya is Krsna Himself in the role of His own devotee. He appeared in India five hundred years ago to teach love of God through the chanting of the Hare Krsna mantra.] shedding light on the people of this age of spiritual darkness. 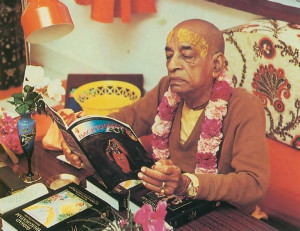 Srila Prabhupada, the founder and spiritual guide of the Hare Krsna movement, started BACK TO GODHEAD to fulfill the desire of his spiritual master, Srila Bhaktisiddhanta Sarasvati, who had told him to preach the science of Krsna consciousness to the English-speaking world. Before passing away in 1937. Srila Bhaktisiddhanta had established a movement of Krsna devotees in India (the Gaudiya Math) and he had sent some of his disciples abroad to preach. They had met with little success, however, and had returned to India after a short time. But Srila Prabhupada was determined to succeed where others had failed, and BACK TO GODHEAD magazine became a major part of that attempt.

In some ways BACK TO GODHEAD has changed greatly in the last forty years. Most of the issues published between 1944 and 1960, for example, were tabloid size—one sheet folded in half, making four pages of type. And Srila Prabhupada himself wrote almost all the articles, oversaw the printing of a thousand copies of each issue, and singlehandedly distributed every copy.

BACK TO GODHEAD offers not only in-depth explanations of the Krsna conscious philosophy but also timely applications of that philosophy to current events. For example, in the inaugural issue, back in 1944, Srila Prabhupada explained the basic principle of spiritual science: the difference between the physical body and the self. Prabhupada pointed out that the physical body is a temporary vehicle—like an automobile—and that we, as eternal spiritual individuals, are drivers of the physical body. When we forget our identity as servants of God, we fall into ignorance and falsely identify with the bodily vehicle. 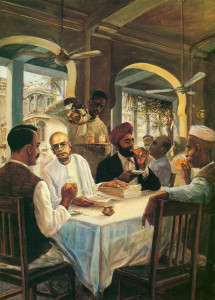 While printing BACK TO GODHEAD in Delhi during the 1950’s, Srila Prabhupada singlehandedly distributed each issue, sometimes at tea shops.

Prabhupada then applied this principle to the current events of World War II. He had witnessed firsthand the bombing of Calcutta and the starvation resulting from the warring parties’ destruction of much of India’s rice crop. And he had noted the pleas of world leaders for “moral rearmament” and a return to spiritual ideals. He advised the war-weary citizens of the world that unless they rose above the bodily concept of life—thinking of themselves as Indians, Americans, Germans, Japanese, and so on, and thinking that the pleasures of the body were life’s all-in-all—they could not have peace.

BACK TO GODHEAD continues this tradition of transcendental commentary, with articles on the nuclear arms race, the economy, pollution, abortion, and many other topics. Our readers will also find feature articles on Krsna conscious communities—both rural and urban—around the world. Such features reveal how devotees live in a simple, joyous way, dedicating their talents and daily activities to the Supreme Lord.

In the fall of 1966, after traveling to the United States and establishing the first center of the International Society for Krishna Consciousness, in New York City, Srila Prabhupada handed over the job of writing and publishing BACK TO GODHEAD to his first disciples. The first issues of BACK TO GODHEAD in America were printed on a mimeograph machine Prabhupada purchased secondhand from a country club in Queens. Prabhupada told his disciples that even if they could print only one page, they should publish BACK TO GODHEAD every month. But they should work hard, he said, to make the magazine as popular as Time.

Through the years, therefore, BACK TO GODHEAD has been the literary staple of the International Society for Krishna Consciousness. Srila Prabhupada often called it the “backbone of ISKCON.” In fact, most of Srila Prabhupada’s followers have been introduced to spiritual life and educated as devotees of Krsna by reading BACK TO GODHEAD. Anyone curious to know what the Hare Krsna movement is about and what the Hare Krsna devotees are doing will find their questions answered in these pages. 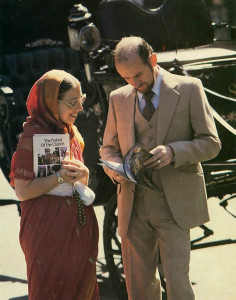 One of Srila Prabhupada’s followers passes out BACK TO GODHEAD magazines at New York City’s Grand Army Plaza.

BACK TO GODHEAD has come a long way since those early issues in New York City, although it still hasn’t caught up with Time. People of this age don’t realize the importance of self-realization. Despite their various religious and quasi-spiritual affiliations, they think that the purpose of human life is to earn money and enjoy sense gratification—and nothing more. To them, self-realization is a waste of time. So when devotees approach people to try and interest them in BACK TO GODHEAD, they often find that people don’t want to take the time.

This is the same situation Prabhupada himself encountered years ago. In the March 1956 issue he wrote:

When we approach some gentleman and request him to become a reader of “Back to Godhead,” sometimes we are replied to with the words “NO TIME.”
They say that they are too busy earning money for maintaining the body and soul together. But when we ask them what they mean by the “Soul,” they have nothing to reply.
But everybody should know from the Bhagavat Geeta, that the body is the outward dress. … So if the dress is taken care of only, without any care of the real person—it is sheer foolishness and a waste of time.

Without understanding the science of Krsna consciousness, modern civilization is trying to be happy just by taking care of the outward body, without any concern for the person inside. Therefore, despite economic and scientific advancement, people are dissatisfied.

Back to Godhead informs its readers not only of the soul within the body but of the eternal spiritual world where everyone eternally serves the Supreme Personality of Godhead, Krsna. Just as we learn about faraway places on this planet by hearing about them, similarly, we can come to understand the nature of the spiritual world and ultimately go there by reading BACK TO GODHEAD. BACK TO GODHEAD magazine, therefore, is an invitation to return to our eternal, misery-free home.

4 Responses to 40 Years of Back To Godhead Magazine