Back to Godhead > Society > Government & Politics > Honor Among Thieves 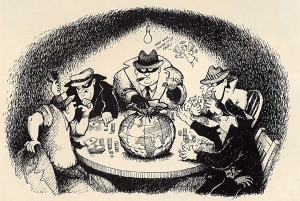 The incident sounded controversial enough: a “briefing book” drawn up to help President Carter prepare for his 1980 campaign debate with Ronald Reagan allegedly found its way to the opposing camp. But when Reagan shrugged off the briefing-book controversy as “much ado about nothing,” a lot of people agreed with him.

Reporters asked 1972 presidential candidate George McGovern how he would have responded to an offer of papers mapping out an opponent’s campaign strategy. “It would take a strong character to reject it,” McGovern conceded. “I’m not going to say what I would have done. I will say that I hope I would have said, ‘No—we don’t resort to that stuff around here. Send it back.’ But I don’t know.” McGovern’s reply seemed to reflect a general mood: a national poll showed that more than 50% of the American public think intelligence-gathering is a normal—if somewhat unethical—aspect of political campaigns.

Following in the wake of Watergate and ABSCAM, the briefing-book news can’t be expected to raise too many hackles. Watergate featured burglary, invasion of privacy, and use of CIA and FBI agents for political surveillance and obstruction of justice. And videotapes of U.S. congressmen accepting $50,000 bribes from a phony Arab sheik highlighted the ABSCAM affair. At least so far, the briefing-book caper has fallen short of its predecessors in providing the excitement and intrigue needed to make it a major-league scandal.

And besides, even serious cases of corruption sometimes fail to anger the American citizen. Tolerance of human frailty is part of the American heritage. “If men were angels,” wrote James Madison in The Federalist, “no government would be necessary.” And, he continued, “If angels were to govern men, neither external nor internal controls on government would be necessary.” In framing the U.S. constitution, Madison and the other founding fathers made sure that America had both a strong federal government and a network of checks and balances to prevent any one branch of government from exercising too much power. They frankly acknowledged, in other words, that men are not angels.

America’s founding fathers did not know how to eliminate corruption, but they tried diligently to contain it. In the democratic system, if a leader gets too nonangelic you can vote him out of office at the next election. Before democracy, when monarchs ran things, changing leaders was messier. “The only balance attempted against the ancient kings,” wrote John Adams, “was a body of nobles; and the consequences were perpetual alternations of rebellion and tyranny, and the butchery of thousands upon every revolution from one to the other.” In a democracy, “revolution” is relatively peaceful: you no longer have to resort to bloodshed to depose self-interested leaders; you can depose them legally every few years.

But is this much of an improvement? “Perpetual alternations”—from one leader to another, one party to another, election after election—still hamper attempts for just and efficient government. And because the democratic system allows that men will be men, not angels, it is somewhat sanctimonious to criticize leaders for petty theft.

Furthermore, it is not only the leaders who are at fault but also the people in general. According to India’s ancient Vedic literature, everything belongs to the Supreme Person and when we use anything without recognizing this we are thieves (Isopanisad, Mantra 1). The funds a congressman or senator may embezzle are not rightfully his, but they don’t belong to the people or the government either. The earth had been existing for a long time before men carved it up into nations. And the earth will continue to exist long after the passing away of these nations, with all their leaders, citizens, and political ideologies. So who is the actual owner, and who is merely a temporary tenant?

We may grow indignant when we catch an elected official with his hand in the public till, but distributing the same money to the people in the form of education, welfare, medical care, public parks, and so on, without centering these projects on the understanding and glorification of Krsna, is just as corrupt. If a band of thieves robs a bank, the leaders of the band may try to claim a larger share of the loot, much to the dismay of their accomplices. But whether they divide the loot evenly or not, there is no question of honesty or justice among thieves.

Modern nations, which may at most pay lip service to the Supreme Person, are collective arrangements to launder property usurped from Him. Whatever the form of government, if a constitution claims that the natural resources of a section of the earth belong to a certain group of human beings and are solely meant to further their “pursuit of happiness,” such a document is nothing but a forged title to stolen property. When someone steals a car, he has to change the serial number and forge a new registration to make his ownership appear legitimate. In the same way, men try to convince themselves that the earth’s resources are theirs alone by creating constitutions that deny the proprietorship of God, the only true owner.

In the context of this great theft and laundering of the Supreme Person’s property, the Watergates, ABSCAMS, and briefing-book capers are insignificant. These small scandals are part of the large one—instances of thieves fighting over loot. First we have to return the stolen property; then we can talk about honesty and justice.

Stress Management with a Difference 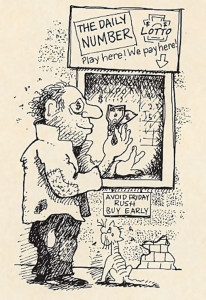 A recent news brief in the Vegetarian Times reported, “Researchers at Harvard Medical School have found that repeating phrases or words can be a valuable technique in helping to reduce stress.

“According to the researchers, the chanting group showed a significantly higher elevation of measurable chemicals in the blood that normally occur during relaxation than did the non-chanting group.”

Chanting produces what Harvard cardiologist Herbert Benson calls “the relaxation response.” It doesn’t matter what you chant, Benson says. You can pick any sound or word that appeals to you. “As long as one can become passively unaware of the outside world, the method is not important.”

We’re glad to see that the leaders of the academic world are discovering some of the benefits of chanting. But we’d like to respectfully submit to Dr. Benson and his co-workers that it’s very important what sound you chant, because some sounds can give you benefits far beyond mere relaxation. Of all the sounds you can chant, the names of God are the best, because they not only relax you but also liberate you from birth and death and bring you life’s ultimate treasure—love of God.

The Impossible Dream: Don’t Bet on It.

They were ordinary folks: he a 59-year-old retired steelworker, she a night waitress in a cheap restaurant for 36 years. They lived in Rehobeth Beach, Delaware, in their mobile home, enjoying the seashore and an occasional visit from their granddaughter, Michelle. Then, last July 22, they became celebrities: Nicholas and Marvein Jorich hit the jackpot in the Pennsylvania State Lottery and were more than $8.8 million richer.

“I’ve dreamed of this for 36 years!” exclaimed Mr. Jorich. (That’s how long he’s been married, and how long he worked in the steel mill.)

Of course, he won’t get all the money right away. After taxes, he’ll net about $336,000 a year for 21 years—if he lives that long. Still, the Jorichs’ bonanza has given a lot of other ordinary folks something to dream about. The lines are much longer now at the lottery windows throughout the state, and the Bureau of State Lotteries couldn’t be happier.

Lotteries are just part of the booming gambling industry. John Scarne, considered by many the world’s foremost authority on gambling, surveyed more than 100,000 people in this country and concluded that Americans bet a total of nearly $1 trillion annually. That’s one third of the gross national product!

Most of the money is wagered on sports, casino games, horse races, lotteries, and bingo, and the ratio of illegal to legal bets is about 7 to 1. With 60% of American adults involved in gambling, and with 80% of all Americans in favor of legalizing it, many states are knocking down any last barriers and getting in on the take by levying taxes and running lotteries or off-track betting parlors.

As I passed the corner lottery window the day after the Jorichs’ big hit, I noticed the long line and began to reflect on the effects of gambling and why devotees of Lord Krsna take a vow to give up all forms of it. The words of Krsna in the Bhagavad-gita came to mind: “Those who are too attracted to wealth and sense pleasure, and who are bewildered by these things, cannot have the resolute determination to attain self-realization.” As for wealth, the people on the lottery line didn’t seem to have much—they looked like middle- and lower-middle-class working people. And as for pleasures, I was sure theirs were run-of-the-mill. But they could dream. Millions of dollars falling into their laps and transforming their lives. And that dream was the problem.

Would $8.8 million save any of these hopelessly hopeful people from getting old? From getting sick? From dying? Would winning the jackpot release any of them from the laws of nature, which dictate that they, as spirit souls, must return again and again in body after body to fulfill their unfulfilled desires and suffer the results of their karma? Only self-realization and pure devotion to Krsna can do that, not hitting the “lucky” number. So in reality the odds against their dream coming true by winning big in the lottery aren’t one in several million, but zero in infinity.

For a devotee of Krsna, gambling is out of the question. Along with illicit sex, meat-eating, and intoxication, he rejects it at the time of formal initiation. He understands that it’s simply an impediment on the spiritual path. Gambling inflames greed and the desire to enjoy material pleasures, precisely the things a devotee wants to minimize so he can develop “resolute determination to attain self-realization.” Gambling also destroys truthfulness and straightforwardness, two essential qualities for a devotee, because it’s based on a network of lies and half-truths—that you can beat the odds, that the game is honest, and that if you win, the money will solve all your problems. Most important of all, gambling is a flagrant misuse of money, which all belongs to God and is meant to be used in His service.

Yet if I had told all this to the impatient people who stood in the lottery line that sweltering July 23, chances are none of them would have refrained from buying their tickets. Their only concern was the Big Dream, the multimillion-dollar jackpot in the sky. They didn’t know that while they were betting on a sure loser, the devotees already held the winning ticket: the knowledge of the Bhagavad-gita, the chanting of the Hare Krsna mantra, and the other aspects of Krsna consciousness that would one day qualify them to enter the spiritual world and enjoy an eternal life of bliss and knowledge in the company of their Lord.