Back to Godhead > ISKCON > Farm Communities > Rainmakers, Big and Small

BACK TO GODHEAD’s farm correspondent
points out that although everybody talks about the weather,
only one person can do something about it. 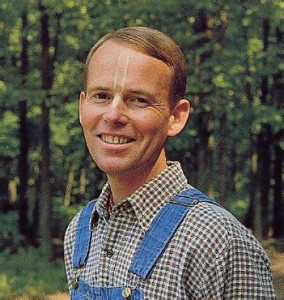 Few of us realize as the farmer does how completely we’re at the mercy of nature. Even if the farmer lives not by selling crops but by selling cows for slaughter, still he’s keenly aware how much he relies on the bounty of the fields to fatten his herd. After he cuts his alfalfa, for instance, he needs two days to “make hay while the sun shines,” then more rain to make his crop grow for another cutting. And even if he irrigates his land, his river or well will go dry if rain stops falling.

Since our very life depends on regular rainfall, how, we might ask, does rain come to us?

Every child knows that the sun evaporates moisture from the earth’s surface, especially the ocean, and draws it into the sky to form clouds. When this moisture condenses, the clouds pour rain on the earth. Sometimes nature stocks this water on mountain peaks in the form of snow and ice. Ideally, this snow and ice melt gradually throughout the spring, summer, and fall. The water then flows down through the great rivers and glides down to the salty ocean again.

Rain, then, begins and ends in the ocean. But where did the ocean come from?

Jaded by an impersonal, mechanistic view of nature, materialistic scientists deny that rain is ultimately an energy of God. Ultimately, they say, we cannot be certain about rain or anything else. And ultimately, if all we do is listen to them, they certainly seem to be right.

During a bad drought in California a few years ago, one scientifically-minded politician proposed towing in icebergs from the Arctic. In the meantime rain mercifully came. And when it did I happened to be in Santa Barbara, where I met a man named Zeus. He worked with the local weather bureau.

“Man is a function of his genes and environment,” Zeus told me, “but [whispering] he has incredibly more potential to control them than he knows.”

“And now man is also going to control the weather?” I asked.

“Going to! Why, just last week we seeded some clouds over Catalina, and it rained buckets.”

I pointed to the tempest outside. “Can you make it stop?”

Zeus’s cloud-seeding—a technique of stimulating rainfall by distributing quantities of dry-ice crystals or silver-iodide smoke through clouds—has proved about as reliable as 1983’s weather. Meteorologists have blamed the record floods and droughts on ocean currents, volcanic dust, sunspots, and even planetary alignments. But the fault, dear reader, is not in our stars, but in ourselves.

When a Krsna conscious farmer hears that strong winds, rain, and high seas have washed out California’s fun in the sun—destroying celebrities’ beachfront Dionysian dens and cocaine condos—or that the Southern Hemisphere’s worst drought in two hundred years has hurt the cattle industry in Australia and New Zealand, he thinks about the connection between what we do on earth and what goes on in the sky. He meditates on the Vedic literature’s description of nature’s reaction to grossly sinful activities like illicit sex, intoxication, abortion, and animal slaughter. And he takes as his almanac the words Lord Krsna, the Supreme Personality of Godhead, speaks in the Bhagavad-gita (3.14): “All living bodies subsist on food grains, which are produced from rains, and rains are produced by performance of sacrifice.”

Lord Krsna prescribes the chanting of His holy names as the best sacrifice (10.25), loving surrender unto Him as the supreme goal (18.66), and food production, cow protection, and trade as the farmer’s service to Him (18.44).

Krsna’s farmer knows that since the Lord is the creator, He is the actual proprietor. The Lord supplies the rainfall, the sunlight, the moonlight, the earth, the air, and even our material bodies so that we may serve Him. When we ignore the Lord and, like thieves, try to exploit His property for our own purposes, nature—under His direction—sends floods, droughts, hurricanes, tornadoes, and a million other calamities. But although Mother Nature is so powerful, Krsna’s farmer lives in her lap, unafraid, and depends on the seed-giving Father.

At the Hare Krsna farm in Hyderabad, India, several years ago, Srila Prabhupada told his disciples that they didn’t need to dig so many wells. He said that if they simply performed Hare Krsna kirtana (congregational chanting of the Lord’s holy names, with the accompaniment of musical instruments and dancing) and if they simply distributed prasadam (food offered to Lord Krsna), sufficient rain would fall.

“So one day we performed a big kirtana and distributed prasadam,” recalls Tejas dasa. “At first there wasn’t a cloud in the sky, but all of a sudden these clouds appeared—and it was the heaviest rain we’d ever experienced in our whole lives. The reservoir behind the temple got totally filled up. We felt ecstatic, and we went out and chanted Hare Krsna for two hours in the rain. Here was real proof of the power of remembering Krsna.”

Materialists, of course, don’t believe in this spiritual method of getting rain. But whether they believe it or not, the fact remains that they can’t control the rainfall. They may joke about “rain dances,” but the best they can come up with is seeding clouds and towing icebergs. For all their satellites, computers, and radar, all they can do is try to tell us where nature will kick us next. “And this year,” notes a spokesman for the National Oceanic and Atmospheric Administration, “the kick has been particularly hard.”

The irony is that really, we’re kicking ourselves. To exploit nature’s resources, for example, we maintain big factories, which pump enormous amounts of pollutants into the atmosphere. Sometimes these pollutants precipitate as “acid rain,” which damages trees and plants, spoils the soil, and poisons our lakes and streams.

Such shenanigans exasperate the farmer, who already feels scorned and exploited by the urban technocracy. “Don’t complain about farmers with your mouth full,” reads one country bumper sticker. But the farmer himself is not without blame. He depends on those factories to make his tractors and chemical fertilizers, which maul and exhaust the land for quick profits. Of course, tractors and fertilizers are useless without rain. But as the farmer rides around in his air-conditioned tractor and tunes in to the tidings of Fun City, he too forgets his dependence on God.

Recently, I was in a farm supply store when a man walked in to buy some seed.

“This seed guaranteed to grow?” he asked.

“Guaranteed,” the storekeeper assured him, “provided the good Lord sends the rain.”

“Hey, I don’t need that stuff,” the man said. “I got my sprinkler system. And when those crops come in, and I get them on my table, I ain’t even gonna invite the Lord for dinner.”

“What about the sun?” the storekeeper challenged.

The man laughed and backed down, but as he left the store, he said he was confident that someday science would provide us with a new improved sun.

“Everybody talks about the weather,” as the old saying goes, “but nobody does anything about it.” And Krsna’s farmer knows it’s foolish to try. He just works hard for the Lord, and whatever comes he takes as the Lord’s mercy. Rain or shine, he remembers Krsna, and harvests peace, prosperity—and love for Him.