Back to Godhead > ISKCON > If the Hare Krsna Movement Is a Cult, I’m Out of a Job!

If the Hare Krsna Movement Is a Cult, I’m Out of a Job! 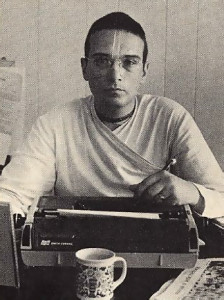 Sometimes people accuse the Hare Krsna movement of being a new cult. We find that both sad and humorous down at the Journal of Vedic Heritage. That’s the monthly newspaper I work for. It’s one of the four most widely read Hindu newspapers in the greater New York metropolitan area. There are fifty full-time Indian employees on the staff, but I, an American Hare Krsna devotee, am editor in chief. Have my employers been duped into hiring a brainwashed cult member to edit their paper?

Of course not. Anyone who knows Indian culture and philosophy knows that the Hare Krsna movement isn’t a cult. The other men and women on the paper, all born in India, marvel at the stories I bring back—accusations of brainwashing, accounts of brutal deprogramming tactics, reports of outrageous lawsuits. They find it difficult to believe that right in the mainstream of Western civilization—a civilization that prides itself on its learning and technological advancement—anyone could be so culturally isolated. And yet I must admit to my Indian co-workers that because many Americans and Europeans are unaware that the Hare Krsna movement is rooted in the world’s oldest and most consistent religious tradition, the movement is often mistaken for a cult.

As editor in chief of the Journal of Vedic Heritage, I must not only write editorials but also edit and rework articles by noted Hindu scholars and theologians. Clearly, my employers wouldn’t trust me with these sensitive tasks if they thought the Hare Krsna movement dubious in any way.

One can trace the modern-day Hare Krsna movement back to antiquity. The movement is based on India’s ancient Vedic texts, the most time-honored and comprehensive of the world’s scriptural classics, and was founded by His Divine Grace A.C. Bhaktivedanta Swami Prabhupada, a scholar, pure devotee of Krsna, and religious leader of unassailable character and integrity.

In 1965, at the age of sixty-nine, Srila Prabhupada sailed alone and penniless from India to the United States and. after a year of great personal struggle and sacrifice, founded and incorporated the International Society for Krishna Consciousness (ISKCON) in New York City. His movement then expanded rapidly throughout the United States and the rest of the world.

By the time Srila Prabhupada passed away in 1977, he had established more than one hundred Krsna conscious temples, asramas, farms, and schools worldwide, and the public chanting of Hare Krsna had become a colorful, familiar sight on the streets of most major cities. To date, the movement has distributed well over a hundred million copies of the sacred literatures of India in some thirty languages.

In its theology and practices, the Hare Krsna movement participates fully in the rich religious and cultural tradition from which it originates, and this has been confirmed not only by Indian laymen but by numerous scholars and religious leaders throughout the world. A. L. Basham, one of the world’s foremost Indologists and the author of the Encyclopaedia Brittanica’s “History of Hinduism” article, had this to say: “From the point of view of spreading knowledge of Indian religions, you [ISKCON] have done a great deal in the Western world. Yours … is the best form of it.” ** (Steven J. Gelberg, ed., Hare Krishna, Hare Krishna: Five Distinguished Scholars on the Krishna Movement in the West (New York: Grove Press, 1983), p. 175.)

Writing on ISKCON’s work in India, J. Stillson Judah, former professor of the history of religions at Berkeley’s Graduate Theological Union, wrote, “India has long received Christian missionaries from the West, and conversely, the United States is used to the visits of Hindu swamis and yogis. It may appear unusual, however, that in recent years hundreds of American devotees of Krishna have been sent to India as missionaries to the Indians. There they have been trying to revive and spread the message of Krishna Consciousness among the Hindu population.” ** (J. Stillson Judah, Hare Krishna and the Counterculture (New York: John Wiley & Sons, Inc., 1974), p. 43.) The Hare Krsna center in Bombay now has more than ten thousand members. It hardly seems ISKCON would have been so successful had it not been genuinely representing Vedic culture.

The renowned O.B.L. Kapoor, who has held many important posts in the Indian educational system (for a time he was head of the philosophy department and dean of the faculty of arts at B.R. College in Agra), has written, “Sankirtan [the congregational chanting of the Lord’s holy names] has been in vogue throughout the length and breadth of the Indian subcontinent since the time of Sri Caitanya and before, and now it is being spread all over the world by the Hare Krsna movement.” ** (O.B.L. Kapoor, The Philosophy and Religion of Sri Caitanya (New Delhi: Munshiram Manoharlal, Ltd., 1976), p. 190.)

Further, on September 30, 1976, at the annual convention of the American Academy of Religion, two hundred American and Canadian scholars signed a petition asserting the Hare Krsna movement’s authenticity. So among Western scholars of philosophy and religion, the International Society for Krishna Consciousness has become widely known and accepted.

But people in general need to be educated. Cultural isolation is a dangerous thing. And when someone points his finger at a traditional form of Indian religion and claims that its adherents are “brainwashed” or that they are victims of some new “cult” employing “mind control,” the problem requires immediate attention. As Harvard theologian Harvey Cox put it, “A glance at some of the groups usually included in the cult category should raise questions right away about the category itself. The Hare Krsnas, for instance, represent the coming to America of Vaisnavite ‘bhakti,’ a centuries-old Indian devotional tradition.” ** (David G. Bromley & Anson D. Shupe, Jr., Strange Gods: The Great American Cult Scare (Boston: Beacon Press, 1981), p. xiii.)

Indians themselves offer the greatest affirmation of the authenticity and significance of the Hare Krsna movement. Throughout America, Europe, and the entire civilized world, ISKCON temples have become places of worship for many Indians abroad. The ISKCON temples are their “India” away from India.

Famous politicians and musicians of India have endorsed ISKCON’s work. Sri Lal Bahadur Shastri, the late prime minister of India, said, “His Divine Grace A.C. Bhaktivedanta Swami Prabhupada is doing invaluable work, and his books are significant contributions to the salvation of mankind.” Lata Mangeshkar, the world’s most prolific recording artist and winner of the Padma Busham Art Award, India’s highest national award, said, “As an artist, I am most grateful for Srila Prabhupada’s efforts toward bringing about a religious cultural revival of Indian classical arts in all parts of the world. By the blessings of Lord Sri Krsna, many talented disciples of Srila Prabhupada have virtually mastered the arts of bhajana and kirtana [devotional music] and classical dance.”

Finally, Dr. Rasik Vihari Joshi, chairman of the department of Sanskrit at the University of Delhi, once stated, “Indian religion and Indology will both forever remain indebted to Srila Prabhupada for making Vaisnava thought and philosophy available around the world through his translations of and commentaries on Bhagavad-gita and Srimad-Bhagavatam. Words fail to express my joy and appreciation for these excellent editions.”

As for my own milieu, down at the Journal of Vedic Heritage I see a profound appreciation for ISKCON’s work every day. We regularly print articles confirming that ISKCON’s conception of Indian spirituality is indeed authentic. And since I started working on the Vedic Heritage, Saraswati Vimala Didi, the paper’s publisher, has said, “Our newspaper has improved a thousand times. I think that ISKCON has properly trained our young editor.”