Deities at New Vrindaban Get a Palace of Their Own 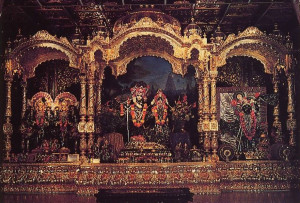 At the Hare Krsna farm community in New Vrindaban, West Virginia, the Deities of Sri Sri GauraNitai, Sri Sri Radha-Vrndavanacandra, and Sri Nathaji stand majestically on Their new silver- and gold-leafed altar platform. They are now only a short distance from Srila Prabhupada’s Palace.

New Vrindaban, West Virginia—The hundreds of thousands of tourists who visit Srila Prabhupada’s Palace of Gold each year can now enjoy an additional transcendental attraction. Within easy walking distance down the road from the world-famous Palace (a memorial to ISKCON’s founder and spiritual guide. His Divine Grace A.C. Bhaktivedanta Swami Prabhupada) stands the newly constructed temple of Sri Sri Radha-Vrndavanacandra, the marble Deity forms of Lord Krsna and His eternal consort, Radha, who preside here at ISKCON’s largest farm community.

On Radha-Vrndavanacandra’s right stand the Deities of Sri Sri Gaura-Nitai, and on Their left stands the Deity of Nathaji, Krsna as the lifter of Govardhana Hill. For the first time in North America, devotees will worship Nathaji in full opulence. ISKCON life members Atmaram Desai, Revati Desai, and Bhagirath Vyasa, who are among the one thousand members who helped fund the temple construction, brought Nathaji from India two years ago.

Over the July Fourth weekend, thousands of devotees and guests came to New Vrindaban to attend a four-day festival celebrating the opening of the temple. Radha-Vrndavanacandra were moved the three and a half miles to Their new home in a fifteen-foot-high, hand-carved chariot of teakwood, silver, and brass. Chanting Hare Krsna and dancing, the celebrants followed the chariot as it rode up the hill to the new temple. Leading the procession were Srila Kirtanananda Swami Bhaktipada (leader of the New Vrindaban community) and Srila Satsvarupa dasa Goswami Gurupada—two of the present spiritual masters in the Hare Krsna movement. 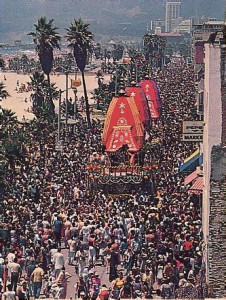 Throngs of celebrants accompany the chariots
on the procession along Venice Beach.

Organized and supervised by Srila Ramesvara Swami, one of ISKCON’s present spiritual masters, the two-day festival drew an estimated 250,000 participants. Thousands chanted Hare Krsna and danced along the Venice Beach parade route, and some helped pull the three multicolored sixty-foot-high chariots that carried the beautifully decorated Deity forms of Lord Jagannatha (“Lord of the Universe”); His brother, Balarama; His sister, Subhadra; and a molded form of Srila Prabhupada.

More than a dozen exhibits depicted various aspects of Krsna consciousness. Along with a photo montage of Srila Prabhupada, there was a life-size figure of him writing his books. A reincarnation booth featured a diorama showing how the soul travels from fetus to corpse and on to a new body, and at another booth guests received answers to their questions about ISKCON and the philosophy of Krsna consciousness. The most popular exhibit was entitled “In Search of the Kingdom of God.” Inspirational photos and paintings showed how futile it is for man to try to understand God on his own, without higher guidance.