The Festival of the Chariots

Intimations of a Festive World 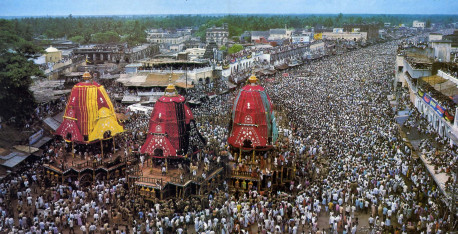 For two thousand years or more, pilgrims have gone each summer to the holy Indian city of Puri, on the Bay of Bengal, to commemorate Lord Krsna’s famous chariot ride. Now, thanks to Srila Prabhupada, the Festival of the Chariots has come to the West, and Americans and Europeans are taking part.

This Krsna culture,” His Divine Grace A.C. Bhaktivedanta Swami Prabhupada used to say, “has so many festivals. We could have one every day. In the spiritual world, every day is a festival.” And when you first see the chariots, you wonder whether that’s just where they’ve come from. Three soaring, silk-covered peaks rumbling along on ten-foot wheels—you have a feeling they’ve come from somewhere you’ve been before, but haven’t been back to for a long while.

“Yoga,” as Srila Prabhupada said, “means ‘link’—our link with the Supreme. At the present moment we have forgotten our link with Krsna. But He has not forgotten; He is always thinking of ways to take us back home.” As you walk with the chariots, along the beachfront or through the park or down the avenue, it seems Krsna is making good at His end of the link.

During the afternoon you’ll hear or remember hearing that fifty centuries ago. Lord Krsna visited this planet to help us revive our feeling for the spiritual world. Once Krsna and His brother and sister took a chariot ride like this one, and He was overjoyed to meet His eternal consort, Srimati Radharani. Radharani urged Krsna to come back to the rural northern Indian village of Vrndavana, where everyone has pure ecstatic love for Him—Vrndavana, the replica of the spiritual world.

“The place We are in now,” Srimati Radharani told Krsna, “is crowded with people and always filled with the clatter and confusion of their coming and going. In Vrndavana, however, there are flower gardens, and the humming of the bees and chirping of the birds can be heard.” 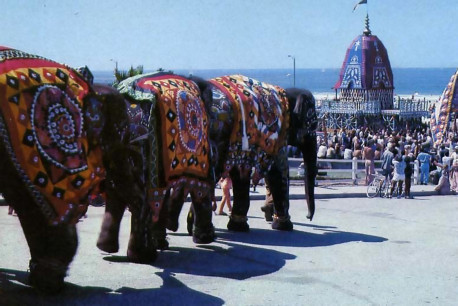 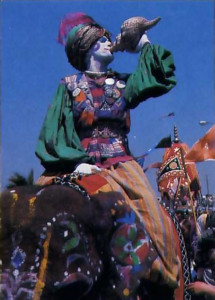 the sound of the conch cuts through the summer air. At last, the
Festival of the Chariots is going to start.

As you watch the big wheels carrying Krsna back to His Vrndavana world, you sense that maybe you’ve been spinning your wheels in this citified world. And now, perhaps with your arms tugging a little on the chariot ropes, you’re helping to take Krsna back to Vrndavana. And you’re thinking.

Then a young lady in a sari walks up with a cup of whipped yoghurt, orange juice, and raspberries, over ice.

“Take it,” she says. “It’s free. It’s spiritual food—prasada, the Lord’s mercy. We offered it to Krsna.”

By now the chariots have gotten to the park or meadow where they were headed. Unusual to see so many people chanting Hare Krsna all at once. All these booths—where did all this food come from?

“From our farms, sir,” says a young lady behind a counter marked “Indian Delicacies,” as she hands you a plate filled with breaded potato-cauliflower chunks in a spicy tomato sauce, little triangular-shaped pastries with zesty green-pea fillings, and some fruit-nut-honey balls. “Srila Prabhupada our spiritual master says that most people are working so hard, simply for nothing. But actually, since the Supreme Lord is everyone’s father… that makes us all a rich man’s children. And a rich man’s children don’t have to work hard. They can spend their time the way we are here, with art and philosophy and drama and music.” 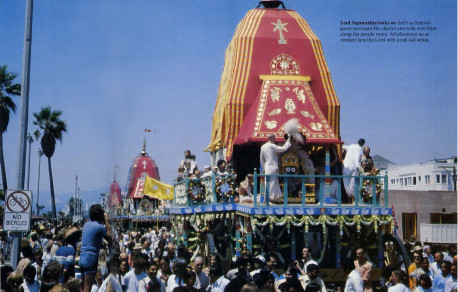 Does this young American lady really believe all this? 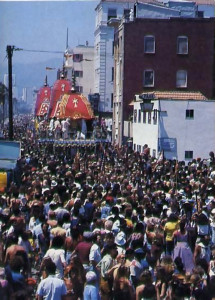 “Sir, even the economists—they’ve known for a long time that it’s human nature to work only when you actually have to, only when you need food or shelter. So like Srila Prabhupada says, every day can be a festival. If we keep some cows and a little land—and there’s plenty of land for everyone in the world—then our economic problems, all our problems, are finished.”

Seems a little too simplistic.

“Prabhupada usually gives the example of the ass. The ass thinks he has to carry a big heavy load all day so that at the end of the day his master will give him a few morsels of grass. What he doesn’t realize is that he can get grass everywhere, all over the world, for free. And in our age people are acting just like asses. This industrial civilization is just a heavy load on everybody’s back. Prabhupada says it’s an ass civilization.”

Sure enough: biting the hand that feeds them.

“This industrial civilization isn’t supplying the food,” the young lady comes back. “God is supplying it. He’s the one that makes the rain fall, and the crops and cows come from Him. In the spiritual world no one has to do hard labor. And here—for anybody who’s using his human intelligence to cultivate God consciousness, Krsna will make this world as good as the spiritual world. He promises that in the Bhagavad-gita: ‘Don’t work so hard. I’ll give you everything if you just surrender to Me.’ “ 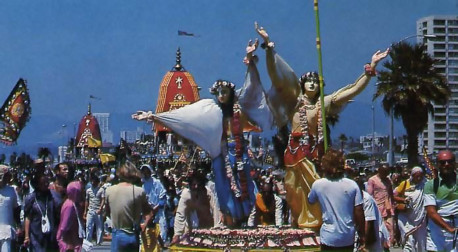 the chariots reach an impasse, some telephone lines. But thanks to some special engineerins, the canopies lower and the chariots pass without difficulty. Leading the way are Lord Caitanya and Lord Nityananda , who five centuries ago advised , ” In ahumble state of mind, one can chant the holy name of the Lord constantly.”

What if everybody did this kind of thing? Wouldn’t it be the end of modern civilization? 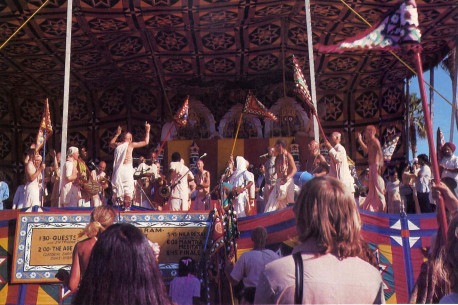 The Krsna culture. Chanting and dancing: people
who try it find the Hare Krsna malui-manrra the ultimate yoga experience. 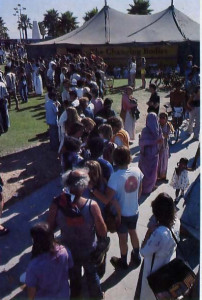 Feasting and philosophy: after visiting the l ndian Delicacies booth, guests line up for the Changing Bodies diorama exhibit.

“In a way, yes. Of course, that’s sort of like asking, ‘What would happen to the prison if all the prisoners left?’ But what would be the harm? And a prison is exactly what this civilization is. Slaughterhouses, casinos, breweries. Everything here is calculated to keep you thinking you’re just a highly evolved animal and make you forget that you’re really spiritual.

“Now, if you’ll check into the books and paintings and recordings at the booths over there, you’ll see how modern technology can do something spiritual for you. And over here you’ll find a diorama exhibit, Changing Bodies. It shows how your body keeps changing from babyhood to childhood to middle age and on and on until death, while you always stay the same person. That’s the way Krsna explains it in the Bhagavad-gita: ‘Just try to understand that you are not your body but a spirit soul, eternally related to Me. Then become My devotee, and you will come to Me in the spiritual world.’ Krsna has given us a beautiful world to live in and become Krsna conscious, but this industrial civilization is making people work hard for nothing, just like asses. Who’s escaping? They’re escaping. They’re escaping happiness.”

But that statue on the chariot. The one with the smile and the big eyes. That’s Krsna, no doubt. 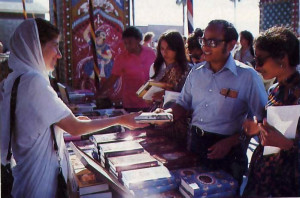 Inside the festival grounds guests visit the book booth and delve into the science of yoga and God realization.

“Yes, that’s Krsna, in His special Deity form called Jagannatha, the Lord of the Universe. In His original form Krsna never leaves the spiritual world, but we can’t see that form while we’re stuck here in this material world with these material bodies. So Krsna manifests Himself through matter. Actually, to Him it makes no difference, because both matter and spirit are His energies. The Vedic literatures say, ‘You cannot see the Lord’s spiritual qualities with your blunt material senses, but if you serve Him lovingly with your tongue and your ears and with eyes anointed with devotion, then you’ll see Him face to face.’ It’s like Srila Prabhupada once said: ‘I know you are all trained as atheists, but there really is a Krsna.’ “ 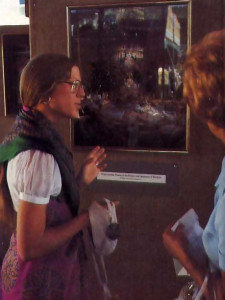 Maybe so. Otherwise, how could this spiritual food taste so unbelievably good? How could Krsna’s words in the Bhagavad-gita—”You are not your body but a spirit soul, eternally related to Me”—make so much sense? How could those simple drums and little cymbals and the names “Hare Krsna, Hare Krsna, Krsna Krsna, Hare Hare/ Hare Rama, Hare Rama, Rama Rama, Hare Hare” move so many people so deeply? “There really is a Krsna”—right, right. It’s all starting to come back now. 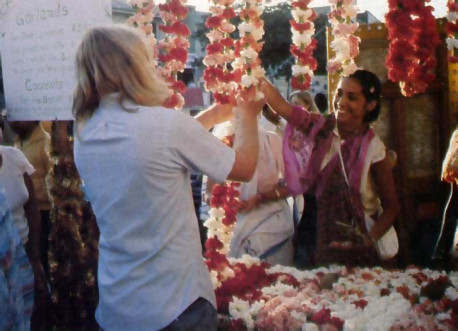