Back to Godhead > Devotees > Preaching > In India > Every Town and Village 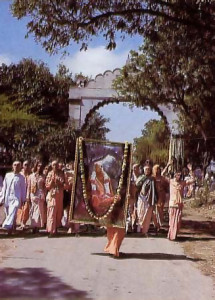 When pilgrims arrive in northern India’s Vrndavana village, the place in India most sacred to Lord Krsna, they now pass through a gate dedicated to the memory of the Founder-Acarya of the International Society for Krishna Consciousness, His Divine Grace A.C. Bhaktivedanta Swami Prabhupada.

The gate rises forty-five feet above Bhaktivedanta Swami Marg, the main road into the village. Local officials named the gate in Srila Prabhupada’s honor, and ISKCON devotees funded, designed, and constructed it.

Vrndavana is especially sacred to Lord Krsna and His devotees because there the Lord performed His transcendental pastimes five thousand years ago. Since Srila Prabhupada glorified Vrndavana by making Krsna’s glories known throughout the world, the residents feel it appropriate that visitors enter Vrndavana on Bhaktivedanta Swami Road, through Bhaktivedanta Swami Gate.

ISKCON’s Berkeley center has turned a secluded ranch in northern California into a haven for people who want to experience the Krsna conscious way of life in an ideal setting.

The four-hundred-acre ranch lies in a pine-forested mountain valley a hundred miles north of San Francisco. Guests take part in predawn meditations on the Hare Krsna mantra, classes in bhakti-yoga, and workshops in Vedic cooking and gardening. In keeping with the farm’s name (New Hrsikesa, after the famed Himalayan yoga village), all who stay there refrain from meat-eating, illicit sex, gambling, and intoxicants. 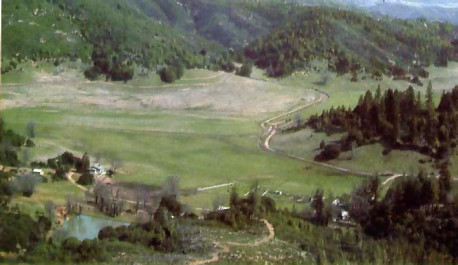 His Divine Grace A.C. Bhaktivedanta Swami Prabhupada selected the eleven successor gurus in June 1977, five months before he passed away. According to the Vedic system, a spiritual student has to take initiation from a guru still physically present on earth. So Srila Prabhupada, who represents an unbroken chain of spiritual masters coming down through time from Lord Krsna Himself, chose some of his most advanced disciples to carry on the chain and initiate new devotees. These eleven gurus may also request other disciples of Srila Prabhupada to share this responsibility of initiating new devotees, so that the Krsna consciousness movement will continue its growth. But the future generations of gurus and disciples will always honor Srila Prabhupada as the Founder-Acarya of ISKCON.