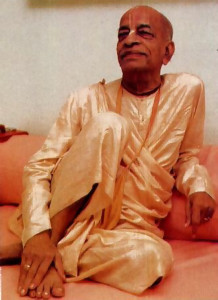 I remember being with Srila Prabhupada once when a cynical reporter interviewed him. The man challenged, “You claim God is speaking to you directly, telling you what to do?”

Sitting there beside Srila Prabhupada, I could feel the reporter’s skepticism. “How can God speak to any man?” he pressed on. “How can any man see and hear God?”

Looking for words that his materialistic mind could accept, I spoke up. “Lord Krsna is in everyone’s heart, and He gives you the intelligence to see exactly what to do and how to make the right decision. In that way Krsna can guide you from within.”

Srila Prabhupada looked at me and shook his head. “Why are you saying this nonsense?” he said. “Krsna will speak to you directly. You will see Him and hear Him. Every decision I make—Krsna is telling me to do it directly.”

That was one of the few times I saw Srila Prabhupada reveal his position so openly. He was actually seeing Krsna, and Krsna was telling him everything.

One day about twenty of Srila Prabhupada’s disciples, including my husband and me, were walking with him at Venice Beach, in Los Angeles. After a while Srila Prabhupada started talking about women—how they tend to be less spiritually intelligent than men and more inclined toward sense gratification. He spoke in this way for several minutes. Then he looked right at me with his special radiant look and said “Don’t you mind.” Everyone laughed. Srila Prabhupada was talking frankly about women, but he didn’t want me to feel personally discouraged. I was laughing inside, too, because I was remembering something he had told us hundreds of times. “You are not your body. You are not a man or a woman but a spirit soul, a servant of God.” I saw it that day more clearly than ever before. Srila Prabhupada was teasing me into understanding the first point of spiritual life: aham brahmasmi—”I am spirit.”

One evening in 1969, while Srila Prabhupada was visiting London, he spoke at a well-attended gathering and rebutted all sorts of challenging questions. In his usual, magnificent way, Srila Prabhupada defeated one critic after another and established the eternal truths of Vedic knowledge. He even dismissed one overly fervent opponent by calling him a fool and telling him to sit down.

The next day I was giving Srila Prabhupada his daily massage. He was due to speak again that evening, and I felt like a trainer getting a prizefighter ready for his next bout. I was talking glowingly of his triumph the evening before, and I went on in this way for several minutes, praising him more and more. Suddenly he stopped me with a thunderous “No!” And then, with a voice so small—a voice that seemed to come from deep within—he said, “I am just a humble servant.” He didn’t think himself a great speaker. He had simply repeated Krsna’s words from Bhagavad-gita. And immediately I felt unworthy of being in the same room with him.

In 1967, on December 17, His Divine Grace kindly accepted me as his disciple. For a while afterward I still lived at home, since I was underage and was attending high school. Along with his many other unique qualities, Srila Prabhupada often revealed compassion and patience of the highest degree. I remember once I wrote him a six-page letter about my Krsna conscious activities while living back at home.

It was a really inconsequential letter. I related to Srila Prabhupada that I’d made an altar for him and that each day I was making an offering to Krsna. The offering consisted of cattails, moss, acorns, and bark, which at that time I thought were nice. Of course, as time went on I learned through experience and reading Srila Prabhupada’s books that actually these things were rather strange and unconventional, to say the least.

Nonetheless, out of his fatherly kindness Srila Prabhupada wrote back:

“My blessings are upon you for your nice prosecution of Krsna consciousness. Whatever you are doing at the present moment is approved by me, and I think, on account of your becoming a sincere soul, Krsna is dictating from within and you are doing things very nicely.”

One morning some of Srila Prabhupada’s students were walking with him in London’s Regents Park. All kinds of flowers grew there, and I was remembering that each day we offered lovely flowers like these to the Krsna Deity back at the temple.

Before long I asked Srila Prabhupada, “When we offer flowers to Krsna, do their spirit souls go back to the spiritual world?”

Starting to see from his point of view, I said, “Yes, Srila Prabhupada, but they are not aware that they are in the kingdom of God.”

He replied, “That is the duty of a spiritual master—to make them aware.”

Another time I was with several devotees in Srila Prabhupada’s room at our small temple in Edinburgh, Scotland. As he was sitting, a shaft of sunlight entered the window and lit up the whole room. Srila Prabhupada remarked with a wave of his hand, “When you become Krsna conscious, it is just like that.”

One Response to Remembering Srila Prabhupada