Back to Godhead > Krishna > A Curse For the Better

A Curse For the Better 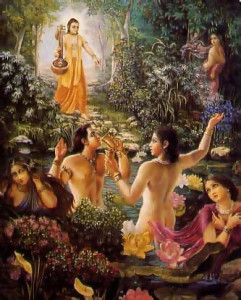 When child Krsna crawled through the courtyard, a 36,000-year curse turned into a blessing.

Kuvera the treasurer of the demigods had two boys. As often happens with rich men’s sons, young Nalakuvara and Manigriva became addicted to intoxication and sex. One day they went searching for their favorite pleasures in a splendid garden on the bank of the Ganges. There they got themselves drunk on a liquor called Varuni, and singing noisily, they wandered through fragrant flowers with beautiful young girls. Soon the young demigods and their companions plunged into the lotus-filled Ganges waters. Nalakuvara and Manigriva were enjoying the company of the young girls just the way male elephants enjoy splashing and sporting with female elephants.

But then the great sage Narada passed nearby, and at once the young girls felt ashamed and covered themselves with their dresses. Yet Nalakuvara and Manigriva were blinded with drink and false pride. They remained naked. When Narada saw how degraded the two young demigods had become, he felt compassionate and wanted to free them from their false enjoyment. So he decided to curse the boys in a way that would in the end prove a blessing.

“Through their pious activities in past lives,” Narada reflected, “these two souls have become the sons of the great demigod Kuvera. But now false pride and liquor have driven them mad, and they cannot even understand that their bodies are uncovered. So if they want so much to be naked, they should get direct experience by living in the bodies of trees. This will be a proper lesson for them. I will arrange that despite their being in tree bodies, they will be able to remember their past sins. Not only that, but by my special favor, after thirty-six thousand years they will see Krsna, the Supreme Personality of Godhead, face to face. At that time they will come back to their real position as His devotees.”

Then Narada went back to his asrama, and Nalakuvara and Manigriva turned into twin arjuna trees. By Narada’s mystic power the trees grew at the very spot in Vrndavana village where the courtyard of Krsna’s childhood home was to be.

One day thirty-six thousand years later, mother Yasoda was breastfeeding her baby Krsna. Suddenly she noticed that the pot of milk she had been heating up was boiling over on the stove. So she put Krsna down and rushed to set things aright. Angered at being left alone, Krsna broke a pot of butter, ate part of the contents in a secluded place, and started feeding the rest to the monkeys. When mother Yasoda found Krsna, she punished Him by tying Him to a large wooden mortar she sometimes used for grinding spices.

“First of all,” Lord Krsna thought to Himself, “Mother left without feeding Me enough milk. That’s why I broke the butter pot and gave the butter in charity to the monkeys. Now she has tied Me to this mortar. So now I shall do something even more mischievous than before.” He decided He would pull down the tall pair of arjuna trees in the yard.

To fulfill the blessing-curse of His great devotee Narada, little Krsna crawled toward the trees, well aware who they really were. “Narada is My dear and affectionate devotee,” Krsna thought to Himself. “Since he wanted Me to come face to face with Nalakuvara and Manigriva, I must surely do so.”

Of course, no one—not even the sons of the treasurer of the demigods—can see the Supreme Personality of Godhead on the strength of his prestige or high position. But Narada was Krsna’s pure devotee and he wanted the boys to see Him; so Krsna also wanted it.

Soon Krsna passed between the two arjuna trees, and the big mortar that He was tied to turned crosswise somehow and stuck between them. Then Krsna pulled on the rope with great strength, and the two trees, limbs and branches shaking, crashed to the ground.

Out of the broken, fallen trees came Nalakuvara and Manigriva, their purified bodies shining like fire and illuminating all directions. At once they came before child Krsna and bowed respectfully.

“That Narada should deliver us by his curse was all Your plan,” they said. “You are the supreme mystic, and everything—past, present, and future—is known to You. Although we have stayed here for so long a time in the bodies of trees, at last You have come as a small boy to deliver us.”

“O Lord,” the brothers went on, “let us always simply serve Your servants, especially Narada. It is by his grace and mercy that we have been able to see You face to face. From now on, may our words describe Your pastimes, may our ears hear Your glories, may our bodies work to please You, may our minds think of Your lotus feet, and may our eyes gaze upon Your devotees.”

Child Krsna smiled broadly. He said, “I know that My pure devotee Narada has given you his causeless mercy, that he has saved you from false pride in your wealth and beauty. You are very fortunate, not only because you were cursed by him, but also because you had the great opportunity just to see him. When one is face to face with the sun, he is no longer in darkness. Similarly, if one is fortunate enough to see a great devotee like Narada, then he is no longer in the darkness of ignorance.

“O Nalakuvara and Manigriva, because you have reawakened transcendental love for Me, your lives have now become successful. This is your last lifetime in the material world. Never again will you fall away from your loving devotional service to Me.”

Nalakuvara and Manigriva circumambulated Lord Krsna and bowed down before Him again and again. Then they departed, and child Krsna sat there, still bound to the grinding mortar.

Soon Krsna’s father Nanda Maharaja and all the neighborhood cowherd men and women arrived on the scene. They were astonished to see Krsna sitting between the fallen trees. What had happened? Had Krsna done this? But how could He have pulled down two gigantic trees? Who had actually done it? While the cowherd men were puzzling over the matter, the children who had been playing nearby said, ” Krsna crawled between the two trees, and the wooden mortar topsy-turvied and stuck there. Then Krsna pulled the rope, and the trees fell down. Finally two shining men came out and talked with Krsna. We saw all of this with our own eyes.”

Most of the cowherd men found it impossible to accept that Krsna had uprooted the trees in such a wonderful way. But some of them believed the children and told Nanda Maharaja, “Your little Krsna is different from the other children. He just might have done it.” Smiling, Nanda Maharaja untied the rope and freed his wonderful son from the grinding mortar.