I can see my body, and in a way I can see my mind and intelligence. Now then, what about the “I” who’s doing all this seeing? Can I see the “I”? 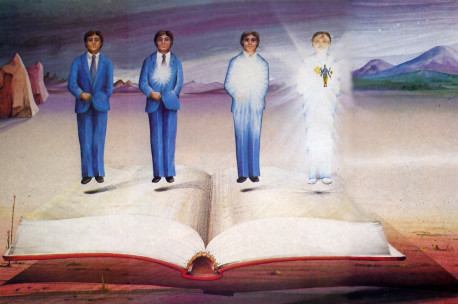 As we all know, the organ for seeing is the eye. The eye catches the light rays reflected by whatever is around us and focuses these rays on its retina. Then it sends images to the brain via the optic nerves. And that, pretty much, is how we see things.

Now then, just who or what is doing all this perceiving?

You are—the living soul within your body. All of us are spiritual souls-subtler than the subtlest material element. Naturally we can’t see the soul with our gross material eyes. But just because we can’t see it, that doesn’t mean it doesn’t exist. If someone argued, “I can’t see the atom, so I don’t think it exists,” that wouldn’t sway anyone who knew how tiny the atom actually is.

Krsna also points out that the soul stays the same but matter changes: “As the embodied soul continually passes from boyhood to youth and from youth to old age, the soul similarly passes into another body at death. The self-realized soul is not bewildered by such a change.” (Bg. 2.13) Now that I’m a young man, I can remember when I was a small boy and when I was a teenager. And when I’m an old man, I’ll remember when I was a middle-aged man. My material body is constantly changing. But somehow I’m still the same person—so I see that I am not the body but the soul within the body. And after I’ve passed away, the body will go right on changing, but I—the soul—will remain the same. As Lord Krsna explains, a person who has transcendental knowledge is not at all puzzled by this transmigration of the soul. Because he has perfect knowledge of the soul and matter and the difference between them, he sees everything perfectly.

One morning in Perth, Australia, His Divine Grace A.C. Bhaktivedanta Swami Prabhupada was walking along the beach. “You want to judge everything by what you can see with your eyes,” he said. “But can you see India? I have just come from India. It is across this ocean, but you cannot see it. Does that mean there is no India? No. If you want knowledge, you have to learn from someone who has already seen.”

Bhagavad-gita puts it very simply: “Just try to learn the truth by approaching a bona fide spiritual master. Inquire from him submissively and render service unto him. The spiritual master can impart transcendental knowledge unto you because he has seen the truth.” In Bhagavad-gita As It Is, Srila Prabhupada shows us how to gain transcendental knowledge and see the soul perfectly. Just as we can see microbes through a microscope and stars through a telescope, so we can see the soul through Bhagavad-gita—the “soul scope.”