Back to Godhead > Krishna > Displaying the Universal Form

Had little Krsna really put dirt in His mouth? Mother Yasoda decided she’d find out for herself. 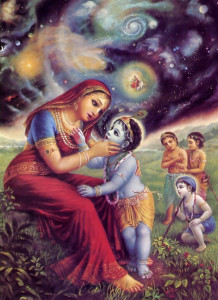 Mother Yasoda loved Krsna intensely—so much so that she would feed and dress Him and send Him out to play with His friends just as though He were an ordinary boy. Yasoda couldn’t see that Krsna was really the Supreme Personality of Godhead. She saw Him only as her beloved son.

One day some of Krsna’s playmates came to mother Yasoda and told her, “Krsna has eaten dirt!” On hearing this, she went and found Him and picked Him up in her arms. She wanted to inspect His mouth and see whether He had eaten anything dangerous.

“My dear Krsna,” Yasoda scolded, “why have You eaten dirt in a solitary place?” She couldn’t understand why He would do such a thing when their home was full of sweetmeats. “Just see—all Your friends are complaining about You.”

“My dear mother,” Krsna replied, “all these boys are telling lies about Me. I have never eaten dirt. While we were playing, My brother Balarama became upset with Me. He got together with all My friends to tell you these stories, just so that you would be angry and punish Me. Actually, I have not done this—take My words as true. But if you think that they are telling the truth, then look inside My mouth and see for yourself whether I have eaten dirt.”

When Krsna opened His mouth, mother Yasoda looked inside and saw outer space spreading before her in all directions, with all its stars and planets. She saw the oceans, mountains, islands, and seas that cover the earth’s surface. She saw fire, light, and the blowing wind. She saw the bodies of all kinds of living things. She could even see universal time. And in the midst of everything, Yasoda also saw herself taking little Krsna on her lap and letting Him suck her breast very peacefully.

Yasoda was awestruck that these things could be appearing within her son’s mouth. “Is this a dream?” she wondered. “Oh, but my eyes are wide open. I’m not dreaming. I’m actually seeing all of this.” Then she thought she had gone mad, but soon she reconsidered. “I’m in good health; I’m not diseased. I don’t think my brain is deranged, for ordinarily I think quite clearly. My child must have attained some cosmic mystic power,” she concluded. “That’s why I’m so perplexed by these visions within His mouth.”

Although mother Yasoda didn’t know it, Krsna is the source of everything, and it was easy for Him to make the whole creation appear within His mouth. But mother Yasoda was simplehearted. She couldn’t understand what was really going on; she became afraid out of maternal affection and prayed, “Let me offer obeisances unto the Supreme Lord, for He is beyond my contemplation, speculation, and meditation. It is only by the influence of His illusory energy that I am wrongly thinking that Nanda Maharaja is my husband and Krsna is my child. Just because I am Nanda’s queen, I also falsely think that his wealth, cows, and calves all belong to me and that all the cowherd men and women in Vrndavana are my subjects.”

Like a self-realized sage, mother Yasoda could see that whatever she possessed had actually come from the Supreme Lord. She wanted to give up her attachment to “my house,” “my husband,” “my son.” The Lord had given all these things to her, she reflected, and He could also take them away.

While mother Yasoda was thinking in this high, philosophical way, Krsna suddenly expanded His spiritual energy. Instantly Yasoda forgot the mystifying vision she had seen within her child’s mouth. Once again she felt her natural motherly affection for Krsna and took Him on her lap. “Here is my son,” she thought. “Let me kiss Him.”

Mother Yasoda displayed the highest spiritual realization—personal love for Krsna. Great sages have long studied the Vedas to get an intellectual grasp of the Supreme, but mother Yasoda surpassed them all—she held the Supreme on her lap.

How did Yasoda achieve her exalted position? In a previous life she was known as Dhara, and her husband Nanda was known as Drona. Brahma (the demigod who oversees this universe) requested these great devotees to beget children and increase the population. They agreed, but also asked for a benediction—that they would be born again on earth and have Lord Krsna as their child. “Let it be so,” said Brahma, and as a result Drona reappeared as Nanda, Dhara reappeared as Yasoda, and Krsna became their child. Of course, mother Yasoda is incomparably blessed, and that’s why to this day, devotees of Krsna pray for her blessings.