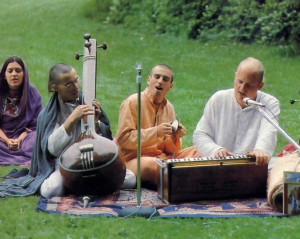 Q. What’s so special about the Hare Krsna mantra? Couldn’t you get the same effect by chanting Coca-cola Coca-cola, or any other sound, over and over again?

A. No. Sri Caitanya Mahaprabhu, the incarnation of God who inaugurated mass public chanting of Hare Krsna five hundred years ago in India, said this about the chanting of God’s names: “My dear Lord, You have innumerable names, and in each name You have invested all Your transcendental energies.” In other words, by chanting and hearing God’s holy names we’re in the presence of God Himself. And since Krsna is the reservoir of all pleasure and purity, the more we chant Hare Krsna the more we feel spiritual pleasure and cleanse our minds of material misconceptions. Could you chant Coca-cola Coca-cola for very long without becoming bored and disgusted? Hardly. But from morning till night you can chant Hare Krsna, Hare Krsna, Krsna Krsna, Hare Hare/ Hare Rama, Hare Rama, Rama Rama, Hare Hare, and you’ll feel new and new spiritual pleasure every moment. How can this be?—the Hare Krsna mantra is a unique kind of sound vibration: the namavatara, or God’s incarnation in His holy names.

Q. I’ve been to several yoga groups that chant Hare Krsna. Is there any difference between their chanting and yours?

A. Yes. Many so-called gurus include the chanting of Hare Krsna in a veritable smorgasbord of meditation techniques, all of which supposedly lead the meditator to a realization of God as Brahman, the impersonal “white light.” But in the Bhagavad-gita God Himself emphatically denies this idea: “There is no truth superior to Me,” says Lord Krsna. “I am the basis of the impersonal Brahman…. Those who worship My personal form are the most perfect.” So nondevotional chanting of Hare Krsna is not really the way to reach life’s ultimate goal—pure loving devotion to Krsna, or God. There is an old saying: “Milk touched by the lips of a snake becomes poison.” Beware of snakelike “gurus” who would use the Hare Krsna mantra for their own ends. The chanting should be heard from the lips of a devotee of the Lord.

The Hare Krsna mantra is actually a spiritual call for the Lord to engage us in His devotional service. The work Hare addresses God’s spiritual energy, Krsna means “the all-attractive Supreme Personality of Godhead,” and Rama, another name of God, means “the reservoir of the highest pleasure.” In essence, when we chant Hare Krsna we’re saying, “O Lord, O Energy of the Lord, please let me serve You.” So unless we hear the Hare Krsna mantra from the Lord’s pure devotee, whose only motive is to serve Him with love, then the sound vibration will not have the desired effect. 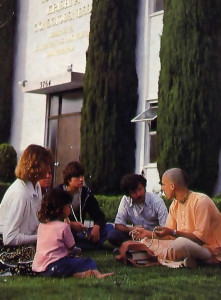 Q. How does chanting Hare Krsna make you self-realized?

A. Self-realization means finding out who we rally are and acting accordingly. Now we’re thinking “I’m an American” or “I’m an Englishman” or “I’m a white male ornithologist” or “I’m a black woman poet.” All these physical and mental designations just cover our real identity as spiritual emanations form the Supreme Spirit, God. By chanting Hare Krsna we lift away these coverings and begins to experience ourselves as pure spirit, or consciousness—transcendental to our body and mind and free from all material designations. The more we chant, the more we become attracted to Krsna, and eventually we realize our eternal identity as His loving servant. This realization is self-realization in the highest sense.

Q. Is chanting Hare Krsna a kind of meditation? I thought meditation was something you did silently, sitting still in a quiet place.

A. Yes, chanting Hare Krsna is a kind of meditation—the easiest and most effective kind for the modern age. The Vedic scriptures advise, “Chant the holy name, chant the holy, chant the holy name of God! There is no other way, no other way, no other way to achieve spiritual perfection in the present age of quarrel and hypocrisy.” Of course, silent meditation was possible thousands of years ago, when people lived much longer than we do and had much stronger bodies and keener minds than we do. But it’s not at all possible today. Today we need the easy yet powerful meditation of chanting Hare Krsna—anytime, anyplace. Simply say the mantra over and over again, pronouncing it very distinctly and hearing it very attentively. 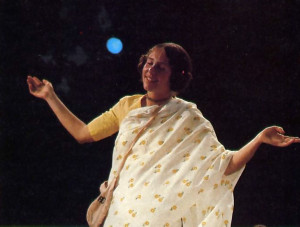 Q. What about the Hare Krsna devotees I see chanting and dancing on the street? Is that also meditation?

A. Yes. This public chanting is a special type of meditation called sankirtana—the mass public chanting of the Hare Krsna mantra. Of al kinds of meditation, chanting Hare Krsna is the best, and of all ways to chant Hare Krsna, sankirtana is the most joyous, easy, and quickly effective. “All glories to sankirtana!” declared Lord Caitanya, and He encouraged His followers to chant together publicly as much as possible. Since the International Society for Krsna Consciousness is following directly in the disciplic succession form Lord Caitanya, sankirtana is an important part of our activities. From such enthusiastic glorification of the Lord’s holy names, both the chanters and the passersby derive immense spiritual benefit.

Q. How did so many Americans take up the chanting of Hare Krsna?

A. Twelve years ago His Divine Grace A.C. Bhaktivedanta Swami Prabhupada journeyed from India to give Americans the teachings of Lord Caitanya. The Lord’s essential teaching is that simply by chanting the Hare Krsna mantra, anyone can reach the highest perfection of life—love of God, or Krsna. With complete faith in the ultimate success of his mission, Srila Prabhupada began chanting Hare Krsna regularly in a small park on New York’s Lower East Side. Gradually he attracted some young disciples and taught them how to chant Hare Krsna and perform other devotional services for the Lord. Form this small beginning, the chanting has gradually spread to many millions of people both her and abroad.

A. As Lord Caitanya said, “There are no restrictions of time and place for chanting Hare Krsna.” Just say the mantra over and over and listen carefully. You can chant alone or with your family or friends—or you can visit the nearest Hare Krsna center and chant with the devotees there. Each morning and evening the devotees get together and chant, and you’re welcome to join in. But whatever way you do it, simply chant Hare Krsna and your life will be sublime.