On the “Scientific” Theory of Creation 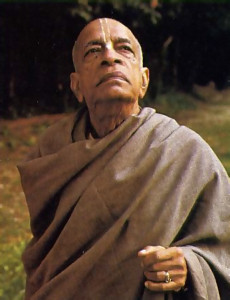 The following conversation between His Divine Grace A.C. Bhaktivedanta Swami Prabhupada and some of his disciples took place during an early-morning walk at Venice Beach, Los Angeles.

Devotee: They are trying to avoid their responsibility to the creator, so they say He doesn’t exist.

Devotee: It is just in the last few generations that the material scientists have received so much prestige and have been able to influence so many people with their propaganda.

Srila Prabhupada: Therefore we have to challenge all these rascal scientists. Devotee: You are giving us the weapon—the transcendental knowledge in your books.

Srila Prabhupada: If people are after real scientific knowledge, they have to accept Krsna consciousness. They have been cheated by these so-called scientists. Now, if people are actually serious to know the truth, they’ll accept this knowledge.

Devotee: The scientists say that the atom is the source of everything.

Srila Prabhupada: And our reply is, “You rascal. You are not coming from an atom—you are coming from your father.”

Devotee: “Originally,” they say, “everything has come about from chance atomic—”

Srila Prabhupada: “Originally!” You do not even know where you have come from. Why are you making theories about the origin? There is a story about a snake charmer. He couldn’t even catch a harmless water snake, but he was trying to catch a cobra. This is the scientists’ defect. The scientists are tiny, insignificant creatures, but they are saying such big things. This is the defect of modern science. They have no importance; still they are saying big things. Just like the story: the snake charmer cannot catch even a nonpoisonous snake, and he says, “I’ll catch a cobra.” You have not even understood that you are created by your mother and father, so why do you try to understand the original creation? These scientists and philosophers—their only business is to defy God. All of them are demons.

Devotee: But they say that before the scientific revolution—

Srila Prabhupada: It is not scientific—it is all a rascal revolution. The scientists cannot even answer this question: “You are created by your father, so why shouldn’t there be an original creator? You have not dropped from the sky.”

Devotee: But then who created the creator?

Srila Prabhupada: That is something we can discuss later—but at least you have to accept that there is a creator.

Devotee: Some scientists will agree that there is a creative energy, but they do not give one creator, one person, the credit.

Srila Prabhupada: No, no. For instance, Mr. Ford manufactures a car, but he does not fashion it by his own hand. He has money—that’s his energy—and he has to pay so many mechanics and supervisors to create the car. But ultimately Ford is the creator. Ford is not personally creating all his cars, but Ford’s money, Ford’s employees, and Ford’s workers are creating them. Similarly, everything is being created by God. In Bhagavad-gita (9.10) Krsna says,

“This material nature is working under My direction, O son of Kunti, and it is producing all the moving and unmoving beings. By its rule this manifestation is created and annihilated again and again.” Like Mr. Ford, Krsna has so many working energies and assistants. The Vedic literatures say, parasya saktir vividhaiva sruyate: God’s multi-energies are doing everything automatically. But the creator is supervising. A child may not understand how this car is created, but we know it is created by a person. Everything is created by a person.

Devotee: So these scientists who don’t accept the creator are like ignorant children.

Srila Prabhupada: That’s all. They cannot imagine that the sky is created by a person, the water is created by a person. The scientists cannot do it, but that does not mean no one can do it. I cannot manufacture an automobile, but someone can. Similarly, the whole gigantic cosmic manifestation—you cannot imagine how it was created, but someone has created it. We see in our practical experience that someone has less intelligence and someone else has more intelligence. So we can understand that God, the creator, has the ultimate intelligence—and that He has created everything.