In March three members of ISKCON’s governing board met with India’s Prime Minister Morarji Desai at his official residence in New Delhi. 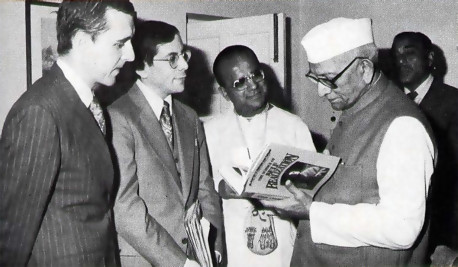 The 1SKCON leaders and Mr. Desai agreed that there are many problems facing the world now that spiritual life and God consciousness have declined, and they discussed how 1SKCON is trying to turn back this trend by disseminating the practical wisdom found in ancient India’s Vedic literatures. The prime minister noted the popularity of Srila Prabhupada’s Bhagavad-gita As It Is (over three million copies sold since 1976) and said that he had obtained his personal copy at the recent Third World Book Fair, in New Delhi. Mr. Desai suggested that people are developing a fondness for Srila Prabhupada’s Bhagavad-gita because they now understand that progress should be not only material but also spiritual.

Prime Minister Desai was also glad to receive a copy of the latest Bhaktivedanta Book Trust publication, Srila Prabhupada’s Science of Self-Realization. In addition, he was interested to note that a leading Indian economist had urged the government to study ISKCON’s programs for worldwide rural development and food relief.

The International Society for Krishna Consciousness has moved its Philadelphia center to a recently-acquired wooded estate in the city’s historic Mt. Airy district. Four stately buildings provide ample space for a temple, offices, and living quarters. Remarked a television commentator at the grand opening, “It looks like the Hare Krsna movement is here to stay….”

Since 1971 Ravindra Svarupa dasa, a Ph.D. candidate at Temple University, has coordinated ISKCON’s work in the area, including yoga classes and discussion groups at Temple, the University of Pennsylvania, Swarthmore, Bryn Mawr, and Haverford. “Srila Prabhupada was always encouraging us to teach the science of Krsna consciousness on the nation’s campuses,” said Ravindra Svarupa, “and now, with our expanded facilities, we’ll be able to increase our college programs.”

Among other things, the new Philadelphia headquarters also serves as a cultural and religious center for the city’s fifteen thousand Indian residents. 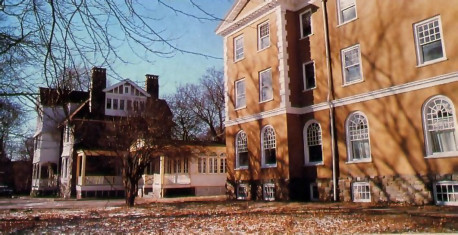