Back to Godhead > Devotees > Preaching > Death > Srimad-Bhagavatam: The Deathless Nectar

On the bank of the Ganges,
a young devotee of Krsna showed a
death-bound king the way to immortality. 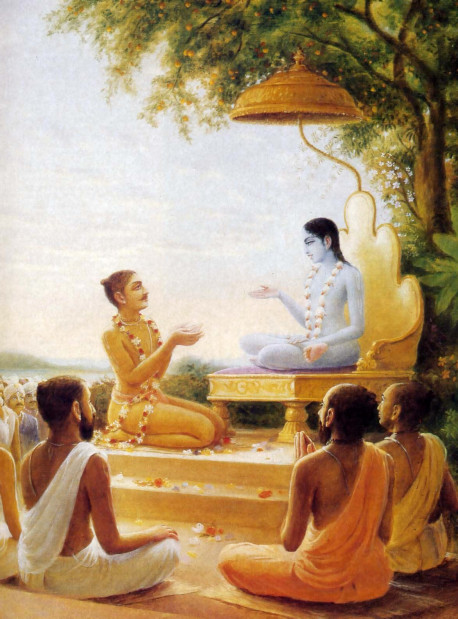 King Pariksit was cursed to die within seven days. Yet he took it all as Krsna’s will, and at once he went to the Ganges to fast till the fatal moment. On hearing the news, great sages came from all over the universe to witness his passing.

“Please tell me,” the king asked, “—what is the duty of one who is about to die?”

Before the sages came to any consensus, a sixteen-year-old boy arrived, along with a noisy crowd of street urchins and women who had been following him for days as if he were a madman. Sukadeva had long arms and curly hair that lay strewn over his shoulders. He was naked, and his bluish bodily hue was reminiscent of Lord Krsna’s. His eyes were gentle and wide, his ears and nose were raised, and because of his fair form and enchanting smiles, he was attractive to ladies.

The sages at the bank of the Ganges could tell that Sukadeva was a self-realized soul. So even though his body looked young and unkempt, they rose from their seats to honor him….

Most of the sages knew that Sukadeva was the son of Vyasadeva, the great spiritual master who had put the Vedas into writing. After performing lengthy penances, Vyasadeva and his wife had conceived Sukadeva. But strangely, for twelve years he refused to leave his mother’s womb. During that time his father instructed him about Lord Krsna and repeatedly asked him to come out. But Sukadeva told his father he was afraid he would waste his life by falling into worldly illusion. Vyasadeva kept reassuring his son, but Sukadeva never believed him. From within the womb he pointed out how attached Vyasadeva himself was to wife, children, home, and the rest.

Finally, Vyasadeva went to Dvaraka city and told Lord Krsna about his dilemma. So Krsna accompanied him back to his cottage and promised Sukadeva he would never fall into worldly illusion. His fears gone Sukadeva came out of the womb, but instantly he left to teach the world what his father had taught him about the pastimes of Krsna.

Afraid he had lost his child, Vyasadeva cried out after him, “Oh, my son!’ But only the trees echoed in response, so the griefstricken Vyasadeva followed Sukadeva into the forest. Far into the distance, he saw his son passing a lake where some young girls were bathing. When the young boy went by, the girls didn’t cover their bodies, but when Vyasadeva came near, they covered themselves at once. He asked the girls about this, and they replied that his son’s heart was pure. Vyasadeva was a married man, and had to observe distinctions between male and female, but Sukadeva did not. Instead, he saw spiritual souls in different kinds of dress. He was transcendental to sex relations, and that is why the girls weren’t very concerned about him.

In any case, Vyasadeva kept after his son. But through his mystic power Sukadeva projected a double of himself. The double returned home with the pacified father and led a normal family life. He even fathered a child.

Meanwhile, the real Sukadeva wandered about the provinces of Kuru and Jangala as though dumb and retarded. He looked like a madman, but actually he was the most elevated transcendental personality, completely self-satisfied and independent. The glamor of worldly possessions never attracted him, nor did he ever become a lackey for worldly men—Sukadeva thought such a fate worse than drinking poison.

As far as Sukadeva was concerned, the whole world was a mere jugglery of names. It made no more sense than the babble of sea waves, and it was full of phantom forms that were doomed to disappear. Fools call these forms “wife,” “children,” “family,” “home,” “country,” “society,” and so forth, and struggle to maintain them. But Sukadeva didn’t care for such false things and wasted effort. All his life he searched for spiritual truth and urged everyone else to do the same.

“When there is enough ground to lie on,” he said, “what is the use of cots and beds? When one can use his own arms, what is the need for a pillow? When one can use the palms of his hands, what need is there for all kinds of utensils? Are there no torn clothes lying on the common road? Do the trees no longer give their -fruit? Are the rivers dried up? Do they no longer supply water to the thirsty? Are the mountain caves now closed? Or above all, does the Almighty Lord no longer protect the fully surrendered souls who spread His glories? Why, then, should anyone flatter those who are intoxicated by hard-earned wealth? As his ultimate goal in life, one should simply worship the Supreme Lord.

“Both by rising and by setting,” said Sukadeva, “the sun brings death nearer for everyone—except him who uses his valuable time to discuss the pastimes of the Lord. Do the trees not live a long life? What good is it? Do the bellows of the blacksmith not breathe? All around us, do the beasts not eat and discharge semen? Are we any different if we will not hear the glories of the Lord?

“One who has not heard and chanted such messages has ears like snake holes and a tongue like that of a frog. By croaking, the frog simply calls the serpents to swallow him up—and by talking of worldly things, men are simply calling death. Let them sing the eternal songs of the Lord and make themselves eternal.

“Your head may be covered with a silken turban or golden crown,” he warned, “but if you won’t bow your head to the Lord, then your turban or crown is just a useless weight. Your hands may be decorated with glittering bangles, but if you won’t use your hands to clean the temple of the Lord, then they are no better than the hands of a corpse. The eyes that will not look at the beautiful form of Krsna are like the eyes on the plumes of peacocks, and the legs that don’t move to the holy places where Krsna is remembered are no better than tree trunks. The person who has never served a pure devotee of Krsna is certainly a dead body, though he may be breathing.”

At any rate, when Sukadeva arrived on the bank of the Ganges, King Pariksit bowed his head, and all the sages offered their greetings. Sukadeva exchanged embraces, handshakes, and nods, and he bowed down to his father Vyasadeva, who was also at the gathering. At this the street urchins and women who had followed the boy sage were struck with wonder and fear. They stopped their frivolous activities, and everything was full of gravity and calm.

Sukadeva was surrounded by saintly sages and demigods, just as the effulgent moon is surrounded by brilliant stars, glowing planets, and other radiant heavenly bodies. He was full of beauty, and all respected him for his pure devotion to Krsna. Now Sukadeva sat down—perfectly pacified, intelligent, and ready to answer any questions without hesitation.

King Pariksit bowed down before him and inquired with sweet words and folded hands: “You are the spiritual master of great saints and sages. So I am begging you—show me the path of perfection for one who is to die.”

Sukadeva answered, “My dear King, your question is glorious, because it is very beneficial for all kinds of people.

“My dear King, you have only seven days to live. But don’t lament—what is the value of a long life that is wasted? Better one moment of full consciousness, because that will start you on the path to eternity. O King, one who desires freedom from death must always hear about, glorify, and remember the Supreme Personality of Godhead,. Sri Krsna. Chanting His names and pastimes constantly—great authorities tell us that this is the way to success. Drink deeply of this deathless nectar—the Lord’s eternal pastimes—and surely you will reach His eternal abode. O King, the highest success in life is to remember Krsna at death.”

One Response to Srimad-Bhagavatam: The Deathless Nectar