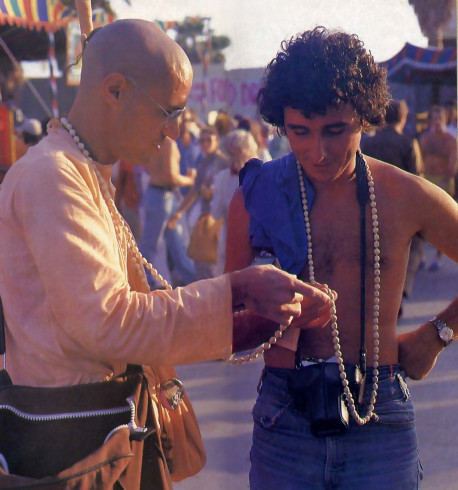 Q. Can I chant Hare Krsna while I’m doing yoga?

A: Chanting Hare Krsna is yoga. Yoga means “linking up with the Supreme,” or Krsna—and Krsna is present in His name—so if you chant Hare Krsna, you’re doing the ultimate yoga. You’re in direct touch with Krsna.

Actually, the original purpose of yoga exercises was simply to quiet the mind and senses so that the yogi could meditate on Krsna in his heart: Now opportunists have watered yoga down and turned it into a health fad.

So … yes, chant the Hare Krsna maha-mantra while you’re doing your yoga exercises. And chant it anytime and anywhere. Stay “linked up” with Krsna. That’s real yoga.

Q. I don’t understand Sanskrit. Will the Hare Krsna mantra work for me?

A. Absolutely. The maha-mantra is like fire: it will bring you warmth and light, whether or not you understand it.

Q. What if I’m tired of formulas for spiritual enlightenment? What !f I just want to relate to people?

A., That’s fine, If you chant the Hare Krsna maha-mantra, you’ll enter the ultimate interpersonal relationship. Krsna, the Supreme, is present in His name. So by chanting His name purely, you’ll rediscover your unique relationship with Him.

If you think about it, you’ll begin to see that whatever relationships you’ve experienced in this material world are feeble, short-lived imitations of the lasting relationships that the residents of the spiritual world enjoy with Krsna. The way to revive your own relationship with Krsna is to chant His names.

Q. Why should I start chanting Hare Krsna?

Sooner or later, we all have to face old age, disease, death, and birth (or shall we say rebirth). Of course, in our modern world we’ve managed to push these miseries fairly well out of sight. We’ve isolated the old people in the nursing homes and the diseased, dying, and newborn in the hospitals. And our TV screens, feature films, newspapers, and billboards bombard us with images of youth, beauty, and health.

But we can fool ourselves only so long. Our turn will come. And then we’ll have to trade in our present body and get another, and on it will go, life after life. India’s Vedic literatures call this phenomenon the cycle of birth and death.

But if we chant the Hare Krsna maha-mantra, we’ll revive our long-forgotten relationship with Lord Krsna. And Krsna promises He’ll be our swift deliverer.

Q. Would it be a good idea to tell a dying person to chant Hare Krsna ?

A. It would be a great idea. The Vedic literatures say, ante narayana-smrtih: remember Krsna at the end. of your life and you’ll go to live with Him in the spiritual world. And the best way to remember Krsna is to chant His names.

If you chant Krsna’s names, you’ll return to’ the spiritual world and live there forever.

Q. I’m aware that chanting is the best way to get ready for death. But why rush it—why not just wait until we get old?

A. How do you know, you’re not old already? Actually, “old” just refers to someone who’s about to die, and who can be sure the “someone” isn’t him? You don’t have any guarantees that you’ll live to be ninety. Better to start chanting the maha-mantra now.

Another thing to consider: when you die, your mind and body will be going through all kinds of changes, and it will be impossible to chant unless you’ve been practicing.

Q. Why so much talk about death? What about happiness here and now?

A. You’re right. W e all want happiness here and now. But we have to know where to look for it

Trying to find happiness in satisfying your body is like trying to eat pudding that has sand in it.

Whatever bodily happiness you experience is temporary; it won’t last. And besides, it comes mixed with old age, disease, death, and rebirth. So when you opt for bodily happiness, you get a huge quotient of sand.

Q. How can just a sound give you so much happiness?

A. The Hare Krsna maha-mantra isn’t an ordinary sound. Krsna is present in His names, and because Krsna is the reservoir of all spiritual pleasure, His names are also full of pleasure. That’s why a great spiritual master once said he wanted millions of ears to hear Krsna’s names and millions of tongues to chant them.