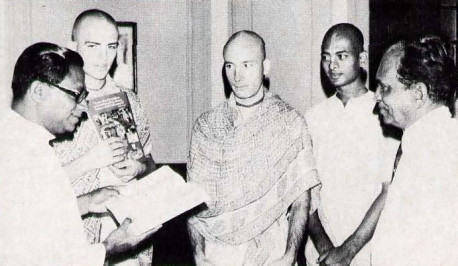 In July ISKCON devotees paid a visit to R. Premadasa, Prime Minister of Sri Lanka. They presented Mr. Premadasa with several books about the philosophy of Krsna consciousness, including Bhagavad-gita As It Is.

“These books are very valuable,” said the Prime Minister. “I’ve read the Gita before. I liked it very much.”

While paging through the Gita, Mr. Premadasa, a Buddhist, found a verse he especially appreciated and read it aloud to those assembled in his office. “For one who is born, death is certain, and for one who is dead, birth is certain.” As the Gita also explains, the prime duty of a head of state is to see that the citizens get free from this cycle of reincarnation by becoming spiritually realized.

During a three-day festival commemorating the day Lord Buddha appeared in the world (and also the day he attained enlightenment), ISKCON Food Relief volunteers in Sri Lanka fed over six thousand people. Following instructions given in the ancient Vedic literatures, the volunteers offered vegetarian food to the Supreme Lord and then distributed it to the general public.

Since Lord Buddha is recognized as one of the many incarnations of Lord Krsna, the ISKCON devotees placed a statue of Lord Buddha upon an altar and worshiped it with incense and flowers, just as they worship the Deity of Krsna. Thousands of joyous Buddhists took part in the celebration, the first of its kind in Sri Lanka. At the festival the devotees also released the first issue of a Krsna conscious newspaper printed in the local language, Singhalese.

Sri Lanka has fertile land and plentiful rainfall, yet food prices are twice as high as in neighboring India, and many staples, such as rice, are in short supply. So at their center in Colombo, the nation’s capital, ISKCON devotees feed hundreds of people each week. Local merchants and ISKCON Food Relief headquarters in New York City provide funding for the free meals.

Bombay-Dr. Narayana Menon, executive director of the National Center for the Performing Arts, said this about Srila Prabhupada’s English translation of Srimad-Bhagavatam, the narrative of Lord Krsna’s pastimes on earth some fifty centuries ago:

“I have been familiar with Srimad-Bhagavatam since my childhood, hearing it regularly, as read by my grandmother or chanted by panditas in the temples of Kerala. But this is the first time that I have gone through it with care, attention, and an inquiring mind. My first and immediate reaction was one of humility, faced with such profound thought and intellectual sophistication. The translation is clear, with a kind of luminosity that only a poet can bring to it. This is a book to be read, reread, studied, and cherished. His Divine Grace deserves our gratitude for making available to us an English rendering of this great work. He conveys everything that is inherent in the original Sanskrit.”

Back To Godhead Readers Donate Farm

Not long ago, Robert and Susan Pollard, of Shepard, Texas, read a copy of BACK TO GODHEAD, visited the Houston Krsna center, and gave a donation: a sixty-acre farm in the pine-forested hill country north of the city. Thanks to the Pollards, the devotees are now transforming the farm into a retreat for people who want to experience the Krsna conscious life in an ideal setting.