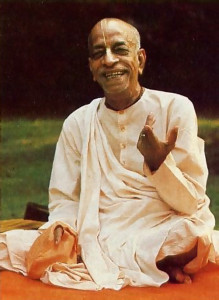 In December of 1971, I arranged speaking program for Srila Prabhupada in Madras, India. Thousands of people came to hear him, and the leading newspaper carried a summary of his lecture every day. Then the Chief Justice of Madras invited him to speak before a large gathering of High Court judges, advocates, and other leading citizens. Srila Prabhupada appealed to the audience to follow the examples of Sri Sanatana Gosvami and Rupa Gosvami, who in the sixteenth century had given up their exalted posts as prime minister and finance minister in the Bengal government to help Sri Caitanya Mahaprabhu spread the Krsna consciousness movement.

After the program the Chief Justice invited Srila Prabhupada and his disciples to dinner at his home, and he disclosed that he wanted to join our movement as soon as possible. Srila Prabhupada again began to glorify the six Gosvamis, but this time in a different way. He explained how after going to Vrndavana, the Gosvamis were always longing for Lord Krsna and His eternal consort Srimati Radharani. “They never said, ‘Now I have seen God! Now I am satisfied!’ No! Rather, they were saying, ‘Where is Radha? Where is Krsna?’ “

“I offer my respectful obeisances unto the six Gosvamis, who were chanting very loudly everywhere in Vrndavana and shouting, ‘Queen of Vrndavana, Radharani! O Lalita! O Krsna, son of Nanda Maharaja! Where are you all now? Are you just on the hill of Govardhana, or are you under the trees on the bank of the Yamuna? Where are you?’ These were their moods in executing Krsna consciousness.”

The Chief Justice respectfully presented Srila Prabhupada with a sandalwood garland and a small statue of Krsna. Then, to demonstrate the ecstasy the Gosvamis felt when they were bereft of Krsna, Srila Prabhupada did something truly wonderful. He held the statue of Krsna in front of Sarasvati, his personal secretary’s three-year-old daughter, and he said, “Who is this, Sarasvati?”

Srila Prabhupada held the statue in front of Sarasvati’s eyes and then slowly moved it around to the side, until he had hidden it behind his back. Then Srila Prabhupada said, “Sarasvati, where is Krsna?”

When Sarasvati realized that Krsna was gone, a startled look of anxiety crossed her face. Her eyes darted in all directions—”Where is Krsna?”

But Krsna was nowhere to be found. She appealed to the faces of the devotees, glanced at their hands, and looked around behind their backs, searching everywhere. Unable to find Krsna, she became stunned.

Sarasvati began again to look anxiously all over the room, but still she could not find Him.

Then a devotee said, “Sarasvati, where is Krsna? Who has Krsna?” Sarasvati’s mind awakened with a realization. She opened her eyes wide, raised her eyebrows, and exclaimed,

Srila Prabhupada carefully brought the statue of Krsna from behind his back and gradually moved it before the expectant eyes of Sarasvati.

Suddenly, Srila Prabhupada removed the statue from Sarasvati’s vision and again said, “Sarasvati, where is Krsna?” Thus he repeated the same procedure. As we observed this touching exchange, we all gained the clear realization that Srila Prabhupada held Krsna within his hand and that he could deliver Krsna to us whenever he felt our desire for Krsna was sufficiently intense. We could also understand that Srila Prabhupada knew our inner feelings. He perfectly knew the heart of everyone. Although Sarasvati was only three years old, Srila Prabhupada could understand her heart. He knew just how to engage her in Krsna consciousness.

All this brought to mind an old devotional song about the special glories of the Krsna conscious spiritual master.

“Krsna is yours; you have the power to give Him to me.”

“I am simply running behind you, shouting, ‘Krsna! Krsna!’ “