Back to Godhead > ISKCON > Temples > The Arrival of a Pure Devotee

The Arrival of a Pure Devotee 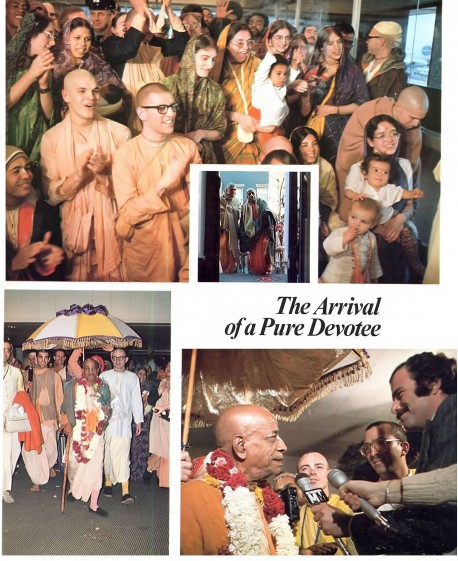 New York: His Divine Grace A.C. Bhaktivedanta Swami Prabhupada, founder and spiritual master of the International Society for Krishna Consciousness (ISKCON), stopped here for a few days recently as part of his continuing tour of ISKCON centers around the world. At JFK International Airport, as more than one hundred disciples royally greeted him and curious reporters thronged around him, Srila Prabhupada explained, in clear language and with fixed conviction, the Krishna conscious philosophy of a God-centered society in which “everything animate and inanimate is recognized to be controlled and owned by the Lord.”

“Will this solve the energy crisis?” one reporter asked. “Yes, why not?” Srila Prabhupada immediately responded. “The only lack in the world today is the lack of God consciousness.” 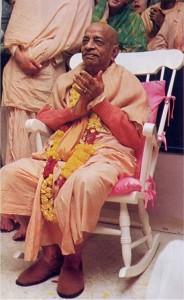 Later, Srila Prabhupada and his disciples went to the New York ISKCON center, where devotees had made preparations for feasting and festivities during their spiritual master’s brief stay.

Entering the temple, Srila Prabhupada first offered his obeisances to the Radha-Krishna Deities who preside there. To allow devotees to approach Him easily, Lord Krishna appears in the form of the Deity. Although the Deity is apparently made of metal or stone, a pure devotee understands that the form of the Lord is non-different from the Lord. Thus the Lord, by His inconceivable potency, appears as the Deity to enable devotees to serve Him and become attracted to Him.

For Srila Prabhupada’s pleasure, one group of disciples enacted a play, “Krishna Kidnaps Rukmini,” taken directly from Srila Prabhupada’s book Krishna, the Supreme Personality of Godhead. Complete with transcendental humor, romance, drama, a fight scene and Krishna conscious philosophy, the performance greatly pleased His Divine Grace, who declared that seeing the play was even better than reading the book.

Srila Prabhupada’s stay in New York, though ecstatic, was brief. Satisfied by the high standard of Krishna consciousness in the New York temple, Srila Prabhupada, after two days, left for the ISKCON World Headquarters in Los Angeles. Devotees of a genuine spiritual master, however, strive never to allow their beloved spiritual master to leave their minds. Thus even in his absence, Srila Prabhupada, though traveling throughout the world, remains present for his disciples, who joyfully continue to remember and follow his pure instructions on the science of devotional service. 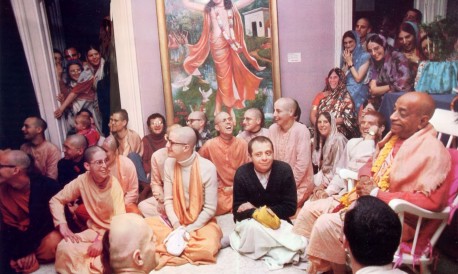 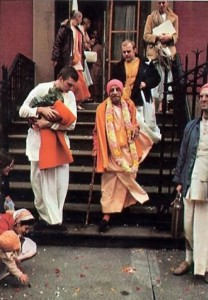 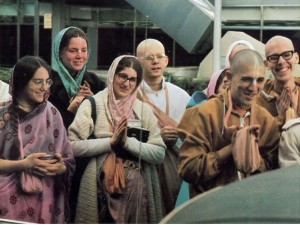 Visakha-devi dasi is now traveling around the world with her husband to produce a documentary film about the Krishna consciousness movement.