The Philosophy Of Love Of God

[The Narada-bhakti-sutra is a treatise on the fundamentals of bhakti, or devotional service to the Supreme Personality of Godhead, Krishna, composed by Narada Muni, one of Lord Krishna’s greatest eternal devotees. Aeons ago, Narada received Vedic knowledge from his father and spiritual master. Lord Brahma, the first created living entity, who received the Vedic science of God from Lord Krishna Himself at the dawn of creation. Each of Narada’s sutras, or codes, therefore, is a highly concentrated expression carrying great meaning. The following is an excerpt from Srila Prabhupada’s as yet unpublished translation and commentary of this important work.] 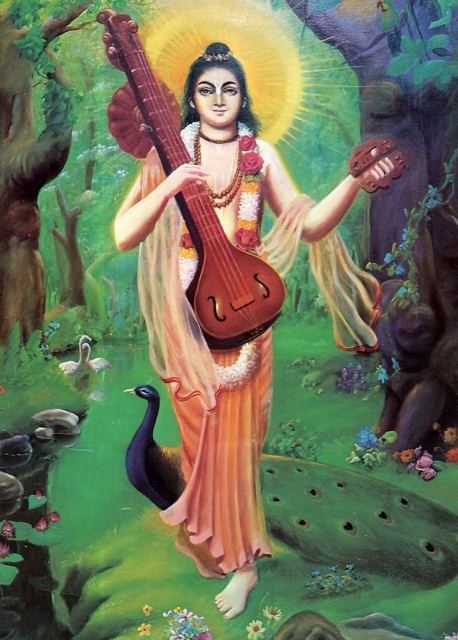 Therefore I shall now try to explain the process of devotional service.

Devotional service to the Supreme Personality of Godhead is explained in Bhagavad-gita, wherein the Lord says that a self-realized person is always in the transcendental state known as brahma-bhuta and is characterized by joyfulness. When one is self-realized, he becomes joyful; in other words, he is free from the material contamination of lamentation and hankering. As long as we are in material existence, we lament for losses in our life, and we hanker for what we do not have. A self-realized person is joyful because he is free from material lamentation and hankering. After attaining self-realization, one sees all living entities equally. He sees no distinction between the higher and lower species of life. A learned man does not distinguish between a brahmana and a dog because he sees the soul within the body. He does not consider the external bodily features. Such a perfected, self-realized person is eligible to understand bhakti, devotional service.

All living entities can be divided into two divisions: some of them are moving, and some of them, like trees, are unable to move. These two divisions are further divided into many subdivisions. Some species are meant for life in the air, some for life in the water, and some for life on the ground. Among the living entities that move on the ground, only 400,000 are human species. Of these 400,000 species of human beings, many are uncivilized or unclean. From the Vedic historical point of view it is understood that the “Aryans” (those who believe in advancing in spiritual life) are the most civilized of human beings. Among the Aryans, the Indians are especially cultured, and among the Indians, the brahmanas are most expert in knowledge of the Vedas.

The Vedic culture, or Vedanta (the science of God), is respected all over the world, and there are people everywhere anxious to understand its purport. The highest perfectional stage of Vedic cultural understanding is explained in Bhagavad-gita, in the Fifteenth Chapter, wherein the Lord says that the purpose of all the Vedas is to understand Him (Lord Krishna). (Bg. 15.15)

“Therefore,” the First Code states, “I shall now try to explain the process of devotional service.” This indicates that this process of devotional service is for the already liberated and self-realized. In the Vedanta-sutra the first aphorism is athato brahma-jijnasa. This brahma-jijnasa, or inquiry into the Supreme Absolute Truth, concerns those who have been elevated to the position of jnana-kanda (philosophical speculation) from the lower stage of karma-kanda (pious fruitive work). Only when a man is perfectly situated in the realization that he isn’t body but pure spirit soul can he begin the process of bhakti, or devotional service.

But in this description of devotional service, the highest stage is love of God.

As stated before, after attainment of the highest stage of self-realization, one becomes situated in the devotional service of the Lord. The perfection of devotional service is the attainment of love of God. Love of God involves the Supreme Personality of Godhead, the devotee, and the process of devotional service. Self-realization (brahma-bhuta) is the beginning of spiritual life; it is not the perfectional stage of complete spiritual realization. One may understand that he is not this body and has nothing to do with this material world. That realization is his freedom or liberation from material entanglement, but that is not the perfectional stage. The perfectional stage begins with the activities of the self-realized position. One must act in the understanding that a living entity is eternally the subordinate servitor of the Supreme Lord-otherwise there is no meaning of bhakti, or self-realization, if one is puffed up with the idea that he is the Supreme Brahman, or that he has become one with Narayana, or that he has merged into the supreme brahmajyoti effulgence, he has not grasped the perfection of life. The self-realized may be highly learned and have understanding, but that is not the perfectional stage. In Srimad-Bhagavatam it is stated that persons who are falsely puffed up and who think they have become liberated by understanding their constitutional position as Brahman, or spirit soul, are factually still contaminated. Their intelligence is not purified because they have no understanding of the Supreme Personality of Godhead.

According to Srimad-Bhagavatam there are three levels of transcendentalists. There are the self-realized transcendentalists who are knowers of the impersonal Brahman feature of the Absolute Truth; there are the knowers of the localized position of the Supreme as Paramatma, as understood by the process of yogic mysticism; and there are bhaktas, persons who are already in knowledge of the Supreme Personality of Godhead and who engage in the devotional service of the Lord. Those who simply understand that man is not matter but spirit soul and who desire to merge into the Supreme Spirit Soul are in the lowest transcendental position. Above them are those mystics who, by meditation, can see within themselves the four-handed Visnu within the heart. They are on the second level. But persons who actually associate with the Supreme Lord Krishna are the highest among all transcendentalists. In the Sixth Chapter of Bhagavad-gita the Lord says:

“And of all yogi’s, he who always abides in Me with great faith, worshiping Me in transcendental loving service, is most intimately united with Me in yoga and is the highest of all.” (Bg. 6.47) That is the beginning in the attainment of the highest perfectional stage, prema, or love of God.

Rupa Gosvami, the most authorized devotee in the devotional line, said that there are different stages in coming to the point of love of Godhead. The first requirement is that one should be sufficiently faithful about attaining love of Godhead. Bhagavad-gita teaches that one should give up all other processes of self-realization and fully surrender unto the Supreme Lord, Krishna. That is faith. One who has full faith in Krishna and surrenders unto Him is eligible to be raised to the highest perfectional stage of prema. Lord Caitanya taught that prema is the highest perfectional stage of human life. Some persons are addicted to the processes of religion, and others are addicted to economic development, sense gratification or the idea of salvation from material existence. But prema, or love of Godhead, is above all these stages; this highest stage of love is above religion, above economic development, above sense gratification and above liberation or salvation. It begins with firm faith that one who engages in full devotional service has attained perfection in all of these processes. This faith is the beginning in the attainment of love of Godhead.

The next stage is reached when one regularly performs the primary principles of devotional service under the guidance of the spiritual master. Then, gradually, all the misgivings of material life are vanquished. There are many habits we acquire in the association of material contamination, chief of which are illicit sex relations, meat eating, intoxication and gambling. One who engages in the regulative principles of devotional service is first of all restricted by the expert spiritual master to abstain from these four principles of sinful life. One cannot rise to the highest perfectional stage of love of Godhead unless he is purified, for God is pure. In Bhagavad-gita, when Arjuna accepted Krishna as the Supreme Lord, he said, “pavitram paramam bhavan.” Pavitram paramam means the purest. The Lord is the purest, and if one wants to serve the Supreme Lord, he must also be pure. Unless one is pure, he cannot understand what the Personality of Godhead is, nor can he engage in His service in love, for devotional service, as stated before, begins from the point of self-realization, when all misgivings of materialistic life are vanquished.

(I)f one is fortunately able to rise to the stage of nistha, after vanquishing all misgivings wrought by material existence, he can then rise to the stage of attachment, which is the beginning of love of Godhead. By progressing, one attains a more advanced stage of relishing a reciprocal exchange between the Lord and himself. Every living entity is eternally related to the Supreme Lord, and this relationship is in one of many different transcendental relationships. At the stage called asakti, or attachment, one can understand his relationship with the Supreme Lord. Understanding one’s position in relationship with the Lord is the beginning of reciprocation. By constant reciprocation between the Lord and the devotee, one is elevated to the highest stage of love of Godhead.

This stage of devotional life is eternal.

When one attains the perfectional stage of love of Godhead, he becomes immortal even in his present body. In Bhagavad-gita the Lord says that any person who simply understands His transcendental activities and His appearance and disappearance in this material world becomes liberated, and after quitting his present body, he at once reaches His abode. Therefore it is to be understood that one who has attained this love of God has perfect knowledge, and even if he falls short of perfect knowledge, he has the preliminary perfection of life that a living entity can attain. The greatest misconception of self-realization is to think of oneself as being one with the Supreme. Persons under this misconception cannot be raised to the highest stage of love. Therefore one who has attained the highest stage of loving service to the Lord has understood his subordinate position.

One who is convinced that he is eternally a servitor of the Supreme Lord is called immortal. Unless one can understand that as a living entity he is eternally a servitor of the Supreme, there is no question of immortality. One who accepts this position, however, becomes immortal. In other words, those under the misconception that the living entity and the Supreme Lord are equal in all respects, both qualitatively and quantitatively, are mistaken, and they are still bound to remain in the material world. They are not elevated to the position of immortality.

Upon attaining love of God, one immediately becomes immortal and no longer has to change his material body. Even if he is not perfected in love of Godhead, his devotional service in this line is considered immortal. Any action in karma-kanda or jnana-kanda will be finished with the change of body, but devotional service, even if not rendered perfectly, will continue into the next life, and the living entity will be allowed to make further progress. The constitutional position of the living entity as a fragment of the Supreme Lord is confirmed in Srimad-Bhagavatam as well as in the Upanisads. The Svetasvatara Upanisad states that if the tip of a hair were divided into one hundred parts and then again one part were divided into another one hundred divisions, that one ten-thousandth part of the tip of a hair would be the size of the living entity. This fragmental position of the portions of the Supreme Lord is confirmed in Bhagavad-gita to be eternal; it cannot be changed. One who understands his constitutional position as a fragmental part and parcel of the Supreme Lord and engages himself in devotional service with all seriousness at once becomes immortal.