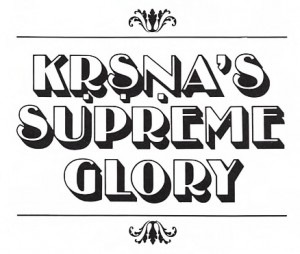 I MIGHT BE A PAUPER and enjoy coming to talk with you, but even if I were the richest man in the world, I might still enjoy a simple talk. Especially if I were a very great man, it would not be difficult for me to spend a little time with my own chosen friends. Similarly, Krishna’s being the Supreme Lord, infinite and inconceivably great in every way, does not inhibit His wanting to enjoy simple relationships. Although the greatest person, He likes to enjoy a little sport, some friends, a bit of affection. Krishna is not different from us in this respect; He is the Supreme Great, but this does not mean He cannot enjoy relationships with His pure devotees such as Bhisma, or Arjuna, or the gopis, who are simple village girls, or His mother Yasoda. Impersonalists or atheists may consider these transcendental loving pastimes of Krishna proof that Krishna is mundane, but to devotees who follow the authorized directions of revealed scriptures, Krishna’s affectionate dealings are proof of His supreme glory.

Krishna has created millions of universes, and on the Battlefield of Kuruksetra He revealed all these universes to His friend Arjuna within His personal form. Bhagavad-gita records the awesome magnificence of that universal form of the Lord, spreading unlimitedly in all directions. What Krishna has done, and what He is capable of doing, is beyond measure. It is inconceivable. But, most wonderfully, the Lord wants to share affectionate exchanges with His devotees. The devotees relish this transcendental aspect of the Lord’s magnificence above all else.

Impersonalists assume that since God is the Supreme Great, He cannot have distinctive qualities. But if He were completely impersonal, with no qualities, how could He be great? Impersonalist philosophers say Krishna’s form and personality are material and therefore cannot be absolute. They think that to be spiritual the Absolute must have no qualities or variety like those of the material world. But the Vedic literature informs us that Krishna’s name, form and personality are all transcendental and that He is the source of all material and spiritual variety.

The ultimate understanding of the Absolute Truth is that He is the Personality of Godhead, with a form of eternity, bliss and knowledge. To say that God cannot have a distinctive form or qualities denies His being inconceivably great, for although God is the supreme controller, the creator of everything that be, with power and glory beyond comprehension, by His unlimited potencies He can nevertheless be medium sized and stand in your room. Understanding this personal aspect of the Lord is much greater than thinking Him simply an impersonal, obscure power, pushing everything but never to be known or seen.

The true greatness of God is that He is a person, hardly bigger than you or I, who can sit down and engage in simple talk. He is so great that He is not preoccupied with creation, maintenance and destruction. Rather, Krishna’s various potencies carry on all the cosmic affairs, while He simply relishes the joy of playing in the forests with His friends, the young village girls and cowherdboys of Vrndavana. He is the master of all energy, both spiritual and material, yet He takes pleasure in simple, reciprocal, sportive play with His devotees. He simply likes to be with His loved ones. 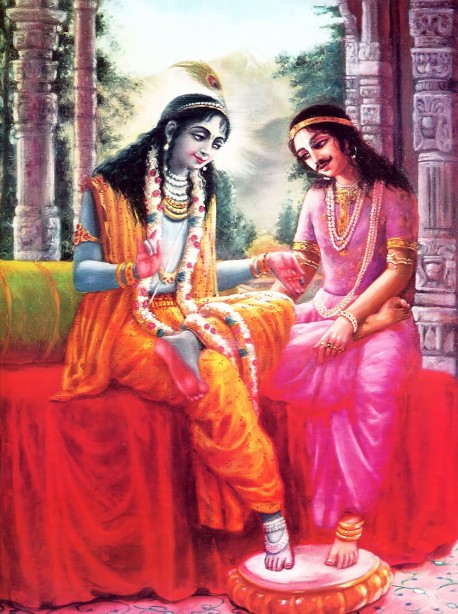 Although Krishna is the Supreme Lord He acts as a personal friend to a devotee like Arjuna.

We should never think of God cheaply, however, comparing His loving exchanges to those of an ordinary man. As soon as we understand who God is, the potency of His supreme position overwhelms us, as the Lord’s universal form overwhelmed Arjuna. In that form, Arjuna could see everything being created, maintained and annihilated, all under the influence of time, and he could not keep his composure.

Those who have a callous or abusive attitude can never understand God’s unlimited greatness and power. And unless one understands Krishna as the omnipotent Supreme Lord, he cannot be purified enough to enter loving relationships with Him. One cannot enter the association of the Lord prematurely, while still retaining the desire to lord it over others. Were Krishna to appear before us as an ordinary boy while we are still in the conditioned state, we might try to exploit Him, compete with Him, steal from Him, or somehow or other subvert His position. But Krishna would not want to associate with us in this way. If we want to fight with Krishna, why should He want to come? Krishna does not want to mix with anyone inimical towards Him, nor is He forced to do so.

We are forced into a cycle of action and reaction, birth and death, in the association of imitation Krishnas who struggle against one another in the pool of material existence. But Krishna is not forced into such association. As long as we remain in a conditioned state of mind, Krishna stays away. He simply desires to enjoy pure love and affection with His friends in the forest of Vrndavana.

Besides being the Supreme Great, Krishna is also the Supreme Pure. When we see someone pure, his qualities are obvious. He has no malice and no greed, he is kind to everyone, and he has no desire to exploit or subvert. He simply wants to be friendly. Krishna is the Supreme Person in that way. He wants to be very gentle and kind and not encounter inimical feelings. He therefore does not allow those who have inimical attitudes to come into His direct association. He allows them to have those attitudes, but He does not want to associate with them.

By practicing pure devotional service under the guidance of a spiritual master, one can become completely Krishna conscious in this lifetime and at the time of death go to Krishna’s abode in the spiritual world. There Krishna engages in the same transcendental relationships with His pure devotees that He enjoys when He descends to Vrndavana within the material world. Both within the material world and within His eternal and original abode, Krishnaloka, far beyond the material universes, Krishna is always surrounded by loving friends, elders, cows, gopis and cowherd boys.

Krishna’s relationships with His devotees are all unique, not stereotyped. For example, Bhisma is a famous devotee of the Lord in the sporting relationship of a military fighter, Bhismadeva, a warrior, always considered himself a servant of the Lord but by Krishna’s arrangement, when the Battle of Kuruksetra came about, Bhisma was on the opposing side. Srimad-Bhagavatam describes that by the influence of inevitable kala, or time, Bhisma was face to face with Krishna on the battlefield, for Krishna desired to have such sport. Bhismadeva had a military spirit, and Krishna, driving the chariot of Arjuna, was also manifesting His chivalry. Bhismadeva’s duty was to try to kill Arjuna in battle. Krishna, therefore, driving Arjuna and facing the arrows of Bhisma, very much enjoyed the battle’s challenge, accepting the arrows’ wounds simply as bites, like those of lovers, for they were not inimical but affectionate.

Thus one may render loving service to the Lord even as His opponent. Just as we enjoy challenging, jousting, sporting, fighting, running and competing in chivalry, Krishna, the supreme enjoyer, also takes pleasure in it. There was no question of Krishna’s actually being injured in this fighting, for He is unlimited and omnipotent. But only the devotees of the Lord are able to understand the pastimes He displays. Those who are rebellious against Him merely consider these pastimes proof that He is mundane.

Krishna wants to appear before His devotees in the way the devotees want to serve Him. Krishna appears before the gopis, His cowherd girl friends, always as a cowherd boy. To the gopis Krishna is not a warrior; to them He is always a boy of the Vrndavana Forest. Years after Krishna left Vrndavana, when He was the King of Dvaraka, He met with the gopis, coming before them with many chariots, elephants, soldiers, maidservants, and all the pomp and paraphernalia of the king of the most opulent land in the world. But when the gopis saw Krishna attired as a royal warrior, they simply thought of the Krishna of Vrndavana. They could not see Krishna as the King of Dvaraka or the warrior of Kuruksetra. They could see Krishna only in Vrndavana, as their youthful loving friend. No matter what He was doing, they saw Him as He was in Vrndavana because this was their relationship with Him.

Each and every living entity in creation has an eternal, unique relationship with Krishna. Now we have forgotten God and our relationship with Him, for we are in the material world, trying to enjoy the illusion that we ourselves are the central enjoyers and proprietors. But human life is meant to revive our dormant love for Krishna. This should be the goal of all our endeavors.

One Response to Krishna’s Supreme Glory