Back to Godhead > Devotees > Preaching > Invocation 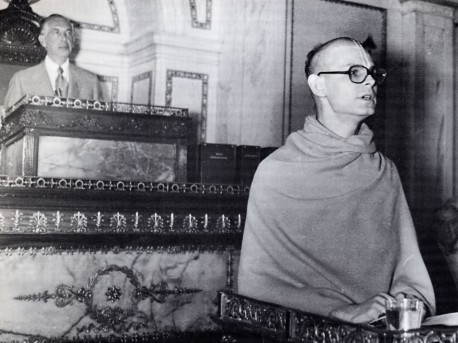 This is the great chanting for peace. It means: “O my Lord, O energy of the Lord, please engage me in Your service.” This is the one true universal and eternal religion: service to the Lord, who is known as Krishna, Rama, Jehovah, Allah, and many other names. We must become conscious of our relation with that Supreme Person, call Him as you will-this religion is preached by all prophets, in all scriptures, in all lands. No one can safely ignore this teaching-not even the so-called “secular state”-because without morally sound, law-abiding citizens, no institution, religious or secular, can endure, We have seen the thousands who have taken to chanting “Hare Krishna” become first-class citizens, giving up the destructive habits like unrestricted sex and indulgence in intoxicants that are now destroying the moral fiber of those who will lead us in the future. It is not sufficient to provide for the bodily welfare of the citizens: if they simply eat, sleep, mate and defend like polished dogs, hogs, camels and asses, how have we done our duty? Shall we take such expense and effort to train a person to read, but then disclaim responsibility when that skill is exercised only on the most vile and degrading literature? The state may not favor any particular faith, but it cannot ignore the general principles of religion. Invoking the names of God “Hare Krishna, Hare Rama” reminds us of this fact.