Back to Godhead > Devotees > Srila Prabhupada’s Sister Passes Away 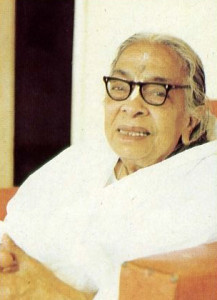 A few minutes past 6:00 p.m. on March 13, at the ISKCON center in Sridham Mayapur, West Bengal, Srila Prabhupada’s younger sister Srimati Bhavatarini-devi dasi passed away. Known to all ISKCON devotees as “Pisima” (Bengali for “the father’s sister”), she was widely respected and loved for her simple and pure devotion to Lord Krsna and His devotees. A few hours before her passing she ceased all activities other than quietly chanting the Hare Krsna mantra. All the devotees at the center gathered around her bedside and chanted Hare Krsna as her final moments came.

Pisima was born in Calcutta in 1899, three years after Srila Prabhupada, and they were intimate friends as children. They sometimes flew kites together, and when a kite did not fly properly they prayed to Krsna so that it would. After Srila Prabhupada received small Radha-Govinda Deities from his father, Pisima became his constant companion in worshiping Them. Later Srila Prabhupada gave her the Deities, and after he passed away she placed Them in the care of the devotees at ISKCON’s Mayapur center.

Pisima was an initiated disciple of Srila Bhaktisiddhanta Sarasvati, Srila Prabhupada’s spiritual master. Srila Prabhupada often said she was a pure devotee of Sri Sri Radha-Krsna, and she showed her unflinching faith in the Lord on many occasions. Once, during an annual festival in Mayapur in the 1940s, her youngest son Madan came down with a dangerous disease called Asiatic cholera. Everyone advised Pisima to take him to the doctor, but she depended on Lord Krsna’s healing power instead. She simply gave him some caranamrta, water that had washed the lotus feet of the Lord, and that brought life back to Madan’s almost dead body.

In 1948 when riots flared up between the Hindus and the Muslims in Calcutta, no one dared go out—except Pisima. Every day she walked alone through the deserted streets to the Radha-Krsna temple.

Without a doubt, Pisima was a pure devotee, and now she has gone back to the spiritual world to participate in Radha-Krsna’s eternal pastimes. We all pray to her for her blessings, so that we can serve the Lord and His associates with the same zeal she displayed all her life.