Hare Krsna Swami in West Africa — Every Town and Village

The members of the School of Universal Law in Aba, Nigeria, pose with Brahmananda Swami (second row, center) after his keynote address at their Annual Convocation.

Aba, Nigeria—Recently Brahmananda Swami, who oversees ISKCON’s activities in West Africa, delivered the keynote address here at the Annual Convocation of a metaphysical group called the School of Universal Law (SOUL). Though the group espouses a generally impersonal view of the Absolute Truth, they warmly welcomed the swami and appreciated his talk. They enthusiastically joined him in chanting Hare Krsna, and later many of them purchased some literature n the science of Krsna consciousness. Brahmananda Swami plans to return to Aba for an extended stay after visiting Ghana; Sierra Leone, and Liberia. 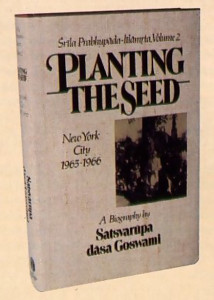 The Bhaktivedanta Book Trust has just published Volume 2 of Srila Prabhupada-lilamrta, the authorized biography of His Divine Grace A.C. Bhaktivedanta Swami Prabhupada, Founder-Acarya of the International Society for Krishna Consciousness. Written by Srila Satsvarupa dasa Goswami, editor in chief of BACK TO GODHEAD, the volume is entitled Planting the Seed-New York City 1965-66. It chronicles how Srila Prabhupada traveled from India to America at age 69, struggled along with no real home, few friends, and practically no money, and finally began the International Society for Krishna Consciousness on New York’s Lower East Side.

The Book Trust plans to release Volume 1, treating of Srila Prabhupada’s life in India before he sailed for America, in the fall of this year. Because Volume 1 involved much difficult and time-consuming research in India, Volume 2 was published first. Srila Satsvarupa Goswami plans to complete the proposed seven-volume work within three years.

Planting the Seed has won appreciation from academicians and religionists as a significant contribution to religio-historical literature. Here is an excerpt from the foreword, written by Dr. Thomas J. Hopkins, chairman of the Department of Religious Studies at Franklin and Marshall College in Lancaster, Pennsylvania:

“[Srila Prabhupada’s biography] is a remarkable tale of faith, determination, and success beyond anyone’s expectation.

The present volume [Planting the Seed] gives only the beginning of the story, but it tells us in fascinating detail how the first seeds of success were planted in what “seemed such unpromising ground….

“The temporal setting of the story is important. The 1960s was a unique period in American history, a time when major changes were taking place in our society. The place is important also, since New York City in general and the East Village in particular were on the leading edge of these changes. The author of this biography was very much a part of this time and place as one of Bhaktivedanta Swami’s earliest disciples in New York. From his own recollections, from recordings and writings of the time, and from extensive interviews with other participants, he has put together a series of striking vignettes of the 1960s that have independent historical value. Threading through these scenes, however, and binding the individuals together in collective effort, is the dominant figure of A.C. Bhaktivedanta Swami….

“It is to Bhaktivedanta’s credit that he believed in keeping nothing secret, and it is to Satsvarupa’s credit that he has presented the events of this critical period as objectively as possible. Seldom before have we had such an intimate and detailed account of a spiritual master bringing forth anew religious movement, and probably never has there been such a wealth of contemporary data to back it up. Those of us who are historians of religion will be working this rich vein for years to come.”