Children’s Books with a Spiritual Theme

An alternative to literary junk food. 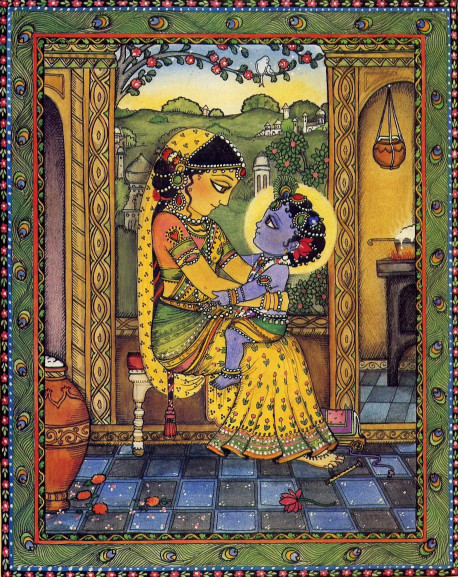 “Ksna played just like an ordinary child. He was really the Supreme Personality of Godhead, but to His mother Yasodii and the other residents of Vrndavana, that was not very important. For them, He was simply their beloved Krsna.” (From The Butter Thief)

Soon after its beginnings in 1966 in a small New York storefront, the Krsna consciousness movement grew to include thousands of full-time devotees. 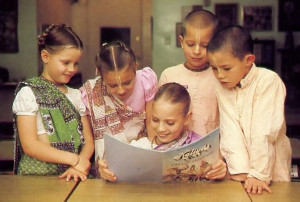 By 1970 it was evident that we would need schools for training our children in the principles of Krsna conscious life. And we would need books, for both inside and outside the classroom. When I mentioned this to my spiritual master, the Society’s founder Srila Prabhupada, he encouraged me to publish a library of children’s literature based on the pastimes of Lord Krsna and His incarnations.

“Do not invent anything,” he directed. “Rather, present Krsna’s pastimes just as they are described in the revealed scriptures. Of course, the language can be simplified, but nothing is to be altered in the stories or characters. Just as I have not altered anything in presenting the Vedic literature in English, so now you adapt these books without change for children. Remember, in Krsna consciousness our strength is purity.”

By 1977 Bala Books (in Sanskrit bala means “child”) was fully launched. The first book, Agha the Terrible Demon, had been prepared as carefully as possible to preserve the exact meaning of Srila Prabhupada’s original translation of the story from the Sanskrit. Naturally devotees were enthusiastic about the book; at the same time, those who had worked on it hoped for its good reception by people in general. That came. 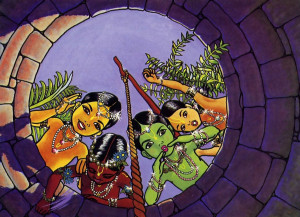 the cowherd boys listen to the echo of their cries in Agha the Terrible Demon. Right: Krsna sports with His friends in the forests of Vrndavana. (From Brahma Steals the Calves.)

“Sanskrit literature is full of stories which have delighted and educated Indian children for thousands of years,” wrote Professor Hugh M. Flick, Jr., of the Harvard Humanities General Education Department. “These stories reflect and illustrate all aspects of life in India, from interpersonal relationships to relationships with God.

“Unfortunately, many of these wonderful tales have never been translated for children. In response to this lack of availability, Bala Books is presenting the popular Krishna cycle of stories, in a format designed especially for English-speaking children

“Whether Krishna is viewed as a folk hero or a an incarnation of God does not affect the universal appeal and educational value of the Bala Books publications. The stories are told with love and are delightfully illustrated.”

When preparing Bala publications, the devotees remember Srila Prabhupada’s instructions: “Do not change anything. Remain pure in your presentation. It is not for your glorification, but for Krsna’s.” The devotees also keep in mind that these are books for extraordinary children. As the Bhagavad-gita explains, children born of devotee parents have surely practiced some form of yoga in their last lifetime. But having failed to complete their spiritual practices, they have again taken birth in the material world. Now, with the benefits of devotee parents and a spiritual environment from early childhood, it is expected that they will achieve full love for God and go back to Him. 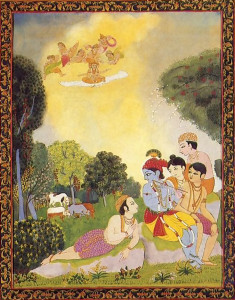 “Krsna is fairly new to the West, but His adventures in Agha the Terrible Demon will appeal to children of all ages. The cover design is very clever, and the art·work is exotic and beautiful. From all points of view storyline, shape, general appearance Agha is a success .” -M. Paysinger Professor of Literature Newberry College

So devotee parents are careful to nurture their children’s God consciousness by offering them suitable books and teaching them Krsna-related games. Some people accuse us of brainwashing our children and of isolating them from the world. Why not give them television and commercially published children’s books? Our answer is that there are no “neutral” programs or books for children. They all reflect values of one kind or another. For example, it is common for characters in children’s books to be seen eating meat. Krsna philosophy condemns animal slaughter as cruel and unnecessary. Also, recent commercial publications for children tend to reinforce the notion that life is chemical, or that there is no difference between the self and the body. We find, as a result, many children’s books exhorting youngsters to be proud of their “blackness” or their “womanhood.” Yet the first lesson a devotee learns is to see the equality of the soul in all bodies.

The books devotee children read are prepared with the intention of bolstering devotional attitudes and encouraging a simple life guided by wisdom, compassion, and love for God. By focusing on Krsna’s heroic activities and qualities, these books transcend the materialistic norms of contemporary society and instead remind young readers of Sri Krsna, the Supreme Personality of Godhead. 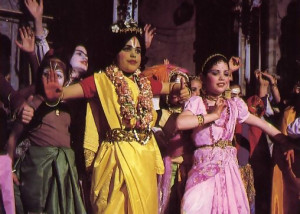 BaJa publications serve as scripts for plays in Krsna conscious schools. At left, children enact the pastimes of Sita and Rama from the epic Ramayana.

Children in Krsna communities, growing up in a devotional environment and reading spiritual books, tend to be philosophically inclined. Topics such as transmigration of the soul, karma, and yoga are not beyond their comprehension. On one occasion I overheard two five-year-old girls talking together at the Krsna school in Philadelphia. They had just discovered a cat lying dead on the road outside the school building. While one girl cried at the way the poor creature had been killed, the other consoled her by explaining that the soul had not died but rather had left the cat’s body and taken up residence in some other place.

In Bala publications, therefore, philosophical issues are not skirted. In Agha, the demon’s soul merges into the spiritual body of Lord Krsna and so attains salvation. The event could have been omitted, but reincarnation and liberation are topics of daily discussion for devotee children. They know that the soul does not die when the body dies, and that remembrance of Krsna at the time of death guarantees entrance into the spiritual world. 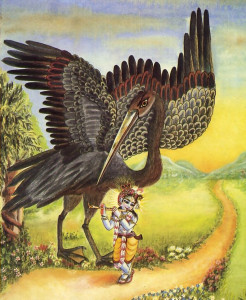 Such topics are rarely found in commercial children’s books, primarily because publishers don’t make much profit from books with spiritual themes. Parents, teachers, and librarians (the book buyers) shy away from books that are too “didactic,” and this condemns most children to a fanciful world created by the media and industry, a world inhabited by Superman, Muppets, Seussian characters, and a hefty roster of television stereotypes who do little to shape good character or reinforce devotional goals.

Bala publications draw their subject matter from historic events depicted in the Vedic literatures. The personalities described are ideal role models for devotee children, and the adults enjoy the stories as much as the children. This is important, because a shared literature forms bonds of common interest between children and adults in Krsna communities.

Not only the reading matter but many elements of a devotee’s life—food, dress, music, social events—carry over from childhood to adulthood. In devotional life children attend the same plays, feasts, and festivals as their parents. Proper devotional behavior is thus greatly reinforced. Of course, the children still run, play, and exhibit the mischievousness common to their age; but for them there is no generation gap, no revolt or running away. The transition from childhood to adulthood is easier. 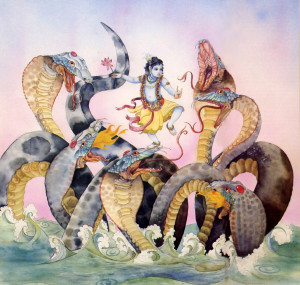 “Krsna dashed Kaliya with His lotus feet, and this was more than the serpent could bear … ” Above. Nanda Maharaja embraces his son after the defeat of the great demon. (From Kaliya, King of Serpents.

Agha was the first Bala publication. It was followed by several other picture books for young readers. Then, in 1978, two teachers from the Krsna conscious school for boys in India came to New York with a unique assignment: to produce a grammar book that would cover all elements of English usage and at the same time use devotional subject matter. That way, instead of learning punctuation with the usual nondescript sentences (“we cant begin.” “Didnt you go today.”) devotee children would work with themes from the Vedas:

In Bala academic books—whether the topic be English or math or history—the theme is always Krsna and His pure devotees. This common thread through the various academic subjects makes retention much easier.

“In Bala textbooks the children’s minds are not distracted by an endless barrage of external stimuli,” explains Bhurijana dasa, the headmaster for a Krsna school in the Northeast. “In most grammar books, for example, publishers have resorted to shabby content to interest children in reading. Their advertising says it outright: ‘Such-and-such reading series on sports makes it happen!’ So the children end up reading about everything from dogs and fads to lovable monsters and their friends. But the common thread of Krsna in all studies means devotee children have a natural interest—no motivation problems. Recently, we gave our students here a Wide Range Achievement Test. Twenty-five percent of the children tested are reading one grade above their peers in public school, forty percent are reading three grades above, and thirty-three percent are reading four grades above. The same results showed in spelling tests.” 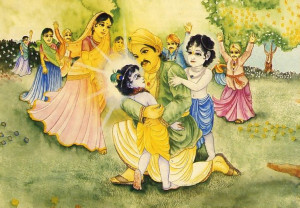 The Krsna school system differs from public schools in yet another way: the teaching techniques. So-called modern methods minimize the work as far as possible, through games and workbooks where everything is already written out for the student; but devotee children learn to write by writing, and they learn to read by reading. No shortcuts. The work is harder, but the themes are always of personal interest to the children, and so they develop strong mental discipline.

To date, Bala Books has published six storybooks and four academic books and has distributed a total of sixty thousand copies around the world. One title (The King Who Swept the Road, about the king of Orissa) has been published also in Spanish and French. Our address is in each book, and the letters we receive show that many parents are dissatisfied with the usual run of children’s books and are seeking alternative reading matter. More than thirty-five percent of the people in the world are under sixteen, and all of them are entitled to read books that do not proselytize for materialism—books that reflect another, more natural lifestyle, centered on a loving relationship with God. The people at Bala Books are planning to produce at least one hundred volumes, including an adaptation of the epic Ramayana. By introducing young readers to these works, we hope to lay a foundation for young people’s cultural, intellectual, and spiritual development.