by Judy Steele
Reprinted from The Idaho Statesman 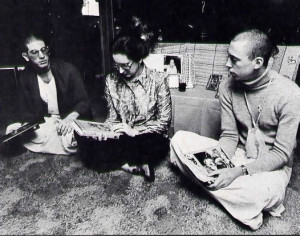 Mrs. Redfield sits in her living room in Boise with her son Jagannatha Puri dasa (at left) and his friend Jyotindra dasa.

Their story started like so many others. After months of reading and study, Joanna Redfield’s son James decided two years ago to join the Hare Krishna movement. At nineteen, he left his parents and three younger brothers, traveled to Portland from the East Coast, moved into a temple, and took the name Jagannatha Puri dasa.

Mrs. Redfield and her husband James didn’t understand their son’s decision, but they respected it, she said.

“We respected it because he’s an intelligent person. We didn’t talk against it.”

But something happened that closed the generation gap.

Mrs. Redfield and her family moved to Boise. She began to receive magazines about the movement from her son. Jagannatha Puri came home to visit and brought friends from the temple with him. Mrs. Redfield went to Portland to see the temple for herself.

Last winter, she decided to become a Hare Krishna follower.

“I was brought up a strict Catholic. I went to church every Sunday, went to catechism and summer programs. As a young woman my only understanding of God was great fear. I was told I had to do things, but nobody ever explained why. I was going to church not out of love but out of fear. Even when I went away from the church, I suffered from fear.”

Mrs. Redfield tried other Christian denominations, but “didn’t get attached” to any of them. “Somehow, conventional religion just didn’t work for me.”

She also went through a period of studying psychology and philosophy.

At one point, she decided the doctrine of the liberated woman was the answer for her. She found a full-time job and began working and taking care of her husband and two children still left at home. “At the end of four months, all I wanted to do was sleep,” she said.

Now, as a believer in the philosophy of Krishna consciousness, Mrs. Redfield follows the principles that direct life in the temples. She eats no meat, eggs, or fish. She doesn’t smoke or drink alcohol or caffeine beverages. She doesn’t gamble. And she adheres to a regulated sex life. In her spare time she reads books from the movement, chants, and listens to devotional music and tapes of the teachings.

But being a member of the movement is not that easy in Boise, she said. There are no temples. She has no one she can talk to about her religion, unless her son and friends from Portland are in town. Her husband respects her beliefs, but is not a Hare Krishna follower.

“I fix vegetarian meals, even for my husband. I buy no beef,” she said. “He respects our son’s decision and knows I believe, but he hasn’t accepted it wholeheartedly.”

Mrs. Redfield wants to pass on the principles of Krishna consciousness to her two sons, ages fourteen and four, still living at home.

“A lot of parents are so fearful. They think their children are renouncing their whole life when they join the movement;” she said. “They think it’s so great that the children are going to discos, and probably having illicit sex and smoking pot. They think that’s all right. But I was really glad for my son when he found Hare Krishna.”

But it’s not easy to instill Krishna teachings in her fourteen-year-old when he is faced with the material world, she said. “I’m trying hard to instill the right values in my fourteen-year-old. But he’s really caught up in the material world. He always has things he wants, things to buy. He understands what I’m talking about, though. He’s said to me, ‘I wait so long for one thing, and then after I get it. I don’t care about it.’ But there are problems that come up trying to instill this philosophy in someone already that old.”

But for herself, release from the material world has been a blessing, Mrs. Redfield said. “Everybody wants to find happiness and contentment. They go to the cinema, they go bowling, but they’re still frustrated. They’re happy for a while but always looking for more. I got thoroughly disgusted with the material world. I’ve come to the point where I don’t have the desire to run around searching for things. When I shop now, it’s for food—just the basics. I don’t want anything else:”