Back to Godhead > Prabhupada > Srila Prabhupada Speaks Out: the Hare Krishna Puzzle

On “The Hare Krishna Puzzle”

Satsvarupa Gosvami: Srila Prabhupada, a newspaper came today from America—the Boston Globe—with a long article titled “The Hare Krishna Puzzle.” A statement by one woman describes the devotees as “parasites.” 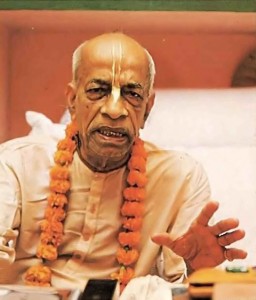 Srila Prabhupada: We are not parasites. We are publishing the best literature in the world. Does this literature come from illiterate hippies? We are accepted by so many scholars—how are we parasites? An intelligent person is not supposed to work like an ass. If we are parasites, then a high-court judge is also a parasite. A rascal sees a judge sitting—talking a little and getting a high salary—so he calls the judge a parasite.

Satsvarupa Gosvami: A parasite is one who lives off others.

Srila Prabhupada: If I enjoy another’s property without his approval, then I’m a parasite. But we aren’t doing that; we are enjoying our father’s property. Krishna is the proprietor. We are good children of Krishna, and Krishna says to everyone who takes shelter of Him, “Don’t worry, I shall give you everything.” Sarva-dharman parityajya mam ekam saranam vraja: “You just surrender to Me; I will give you protection.” Why do they say we are “parasites”?

Satsvarupa Gosvami: They are referring to the devotees’ begging in the streets.

Srila Prabhupada: What we are doing is not begging, it is humbleness. People are puffed up, so we are approaching them in humbleness. Besides, if I sell a book about Krishna, is that begging?

Satsvarupa Gosvami: They see it as begging.

Srila Prabhupada: No, it is humbleness. In India many highly scholarly persons beg. They are titled bhiksu-tridandi-svami. They beg to learn pridelessness and humility. In Vedic culture it is allowed; the brahmacaris, sannyasis, and brahmanas are allowed to beg alms.

Satsvarupa Gosvami: But what if the culture is entirely different, as in the West?

Srila Prabhupada: Yes, your culture is different, and therefore the youth are becoming hippies, and the mothers are killing their own children in the womb-all in the name of “freedom.” Actually, there is no culture in the West; therefore, the whole atmosphere is abominable. But in a civilized culture a young boy may beg, as a discipline, just to learn humbleness. Even though he may be from a big family, he begs in order to become meek. And Christ said, “To the meek God is available.” You are right when you say you have an entirely different culture. You don’t know real culture. You have a culture that kills children, so how will you understand the higher Vedic culture? Our disciples are going out and selling books on Krishna consciousness just to give you a chance to understand what real, spiritual culture is—and you are calling them “parasites.” What else are they saying?

Satsvarupa Gosvami: The opposition is claiming that joining Krishna consciousness is not an exercise of freedom of religion, but that we are guilty of “mind control.”

Srila Prabhupada: Him whose mind is already in Krishna consciousness the “deprogrammers” want to control by force. They are guilty of mind control, not we. They kidnap him and force him to think like them.

Satsvarupa Gosvami: Many times our opposition consists of businessmen and parents of devotees. They are very alarmed.

Srila Prabhupada: They should be alarmed. If the Hare Krishna movement goes on, their culture is finished. Now we are being recognized as the enemy of maya [illusion]. A fight is a fight. They are using their tactics; we are using ours. We will prove that they have no intelligence. As long as they don’t know Krishna, they remain fools.

Satsvarupa Gosvami: One man was challenging, “What if everyone became like you devotees?” He was worried. He thought the economy would collapse if everyone took to Krishna consciousness.

Srila Prabhupada: Well, anyway, he will not take to Krishna consciousness, and the materialistic economy will go on. As long as there is a class of men like him, there is no problem—the economy will go on. “If the prisoners become reformed, how will the prison continue?” Is that a very intelligent question? Their thinking is like that. We are giving up meat, and the slaughterhouse proprietors are sorry—”How will the business go on?”—as if that were a very wonderful business. The sooner you close that business, the better. That will be good for you. Liquor shops, breweries, cigarette factories-they are all worried how business will go on. Cow slaughter is the greatest sinful activity. They don’t know what they are doing. Therefore, a thorough overhaul is required; otherwise their stool-bound brains can’t be cleansed. Yes, we are washing your brain, because you have so much stool in your brain. We are sweepers engaged on behalf of God to wash the stool from your brain. We have to do it. You modern civilized atheists can’t even sleep peacefully—which a dog can do—yet you claim education. We are teaching that if you have illicit sex life you’ll be implicated in so many ways. So if I say, “No illicit sex,” what is the harm? But you are so sinful that you are killing your own children, and you don’t even know it is sinful. We have to wash your brain.

Satsvarupa Gosvami: This article from the Boston Globe says it is a great puzzle whether the Hare Krishna movement is good or bad.

Srila Prabhupada: At least they are now considering. Formerly they said it was bad. Now they have come to the marginal point—whether the Hare Krishna movement is good or bad. Finally the day will come when they say, “Yes, it is good. “