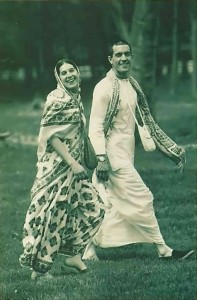 On April 20, 1977, The Washington Post reported yet another victory for a Krishna-conscious devotee over “deprogramming” adversaries. Titled “Deprogramming Failure,” the Post article recounts twenty-four-year-old Megha-devi dasi’s kidnapping, her attempted “deprogramming,” and her successful effort to fool her captors and return to the Washington, D. C., Radha-Krishna temple.

The ordeal began last February 26, when Megha and her fiance (Ekesvara dasa) went to Baltimore to attend a bridal shower for them, hosted by her widowed mother and sister.

“They welcomed me and told me how well I looked,” Megha told reporters at a press conference after her escape. But there was no shower. Instead, Megha was hustled off to a Baltimore motel, where “several ‘deprogrammers’ locked me into a room with the windows nailed shut….” Inside the room the “deprogrammers” (“a lot of big men”) told her they had legal custody over her. Sadly, they were telling the truth. Two days earlier Megha’s mother had obtained a temporary conservatorship order from Montgomery County Circuit Court Judge Richard B. Latham. It paved the way for Megha’s “legal” kidnapping.

“They yelled and screamed at me,” Megha recalled. “They very much blasphemed my spiritual master…. They burned my sacred prayer beads right in my face.” They also forced her to change from her traditional sari into ill-fitting blue jeans and repeatedly told her that ISKCON had brainwashed her. They even made her read tracts about “mind control.”

“I was treated exactly like a prisoner. It reminded me of what it must feel like in the Iron Curtain Communist countries, where freedom of thought is so limited.”

On March 1 she convinced her captors that her loyalty to Krishna had been shaken, and they took her to a private “rehabilitation center” in Bradford, New Hampshire.

“They kept telling me I should adjust to the ‘real world,’ but their ‘real world’ was full of meaninglessness and sinful activities like meat-eating.”

On March 27, after nearly four weeks, the “deprogrammers” permitted Megha to go to her sister’s house in Baltimore. “I kept begging them, ‘Let me go home! Let me go home!’ when all the time I simply wanted to return to the temple,” Megha related.

The next day, Judge Latham dissolved the conservatorship order, and on the 30th Megha made her escape. “I was finally allowed to go shopping with a girl friend. I left her trying on dresses in a dressing room and took a bus to the [Krishna] center in Baltimore. That was the end of it. From there I called my fiance and he came and got me.”

Since her abduction, Megha has had no contact with her mother or sisters. “I expect them to come to me,” she said. “The fault is on their part; the mistakes are theirs…. They didn’t understand or respect my devotion to Lord Krishna…. But I don’t hate my mother or hold what she’s done against her.”

Megha, meanwhile, is very happy to be back at New Hastinapura, where she spends her days cooking, distributing books about Krishna, and teaching Sunday school.

French Professor Praises Bhagavad-gita As It Is

The International Society for Krishna Consciousness embodies the essence of what is commonly known as Hinduism—a religion practiced by more than five hundred million people. Dr. Jean Varenne, Professor of Sanskrit Studies at the University of Aix-en-Provence in Marseilles, France, explains ISKCON’s authenticity in the following review of the Bhagavad-gita As It Is, by His Divine Grace A.C. Bhaktivedanta Swami Prabhupada.

“It is Indian tradition that all important spiritual masters explain for their disciples the fundamental text of Hinduism, the Bhagavad-gita…The founder of the Krishna consciousness movement (Hare Krishna) has followed this tradition; and now we have the French translation of the Bhagavad-gita As It Is.

“As for the teachings of Srila Prabhupada, they are obviously faithful to those of Caitanya, the celebrated apostle of a renaissance in bhakti (ardent devotion to Krishna), who appeared in the sixteenth century. From this point of view, this magnificently presented book is of inestimable value, for the West knows little of this major current in Hinduism. For many reasons, until now it has been the Vedanta of Sankara or the yoga of Patanjali which has been the most easily accessible to us. These are, however, far from a complete representation of this multi-facetted, complex religion. The Hindus themselves, however, profess that all these paths converge and ultimately become one. Untiringly, Swami Bhaktivedanta insists on this one path as being bhakti, and that bhakti is the surest path of salvation (a conclusion supported everywhere in the Gita itself). One cannot help but enthusiastically recommend that others read such a work, which, from so many points of view, merits applause.”

One Response to Every Town and Village – Devotee Foils “Deprogrammers”