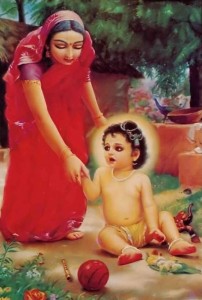 Lord Krishna, the Supreme Personality of Godhead, appears within the material world in every age. Sometimes He appears as Lord Rama or some other incarnation, and sometimes He appears in His original, supreme form of Sri Krishna. But although He appears in different forms and different lands and among different peoples, His mission is always the same: to teach love of God as the prime necessity for humanity. Five hundred years ago He appeared in Bengal, India, as Lord Caitanya and showed the perfect example of devotion to Krishna by adopting the role of Krishna’s pure devotee.

An especially touching instance of Lord Caitanya’s exemplary behavior was His loving relationship with His mother, Sacidevi. Theirs was the ideal relationship between an enlightened, loving mother and her Krishna-conscious son.

When Lord Caitanya was still a boy, His older brother Visvarupa accepted the renounced order of life (sannyasa) and left home to travel as a missionary. Visvarupa’s leaving greatly upset His parents, but Lord Caitanya assured them that by accepting sannyasa Visvarupa was rendering the best service to His family. (The Vedic scriptures confirm that if one becomes Krishna’s pure devotee, his parents and many generations of his forefathers are liberated from material bondage and attain the kingdom of God.) To further comfort His parents, Lord Caitanya remained at home. And later, after His father’s passing, He married.

However, at the age of twenty-four Lord Caitanya left His mother and young wife and also entered the renounced order. He wanted to expand His sankirtana movement, to propagate more widely the congregational chanting of the Hare Krishna mantra. The Lord immediately departed for Vrndavana, but being overwhelmed with ecstatic love for Krishna, He lost all awareness of the external world and wandered for three days on the banks of the Ganges at Navadvipa. Finally, His chief associates, Sri Advaita and Nityananda Prabhus, induced Him to come to Advaita’s home.

When the Lord went to Sri Advaita’s home, a meeting with His mother occurred that was surcharged with feelings of both joy and grief. Upon seeing one another, they both became overwhelmed with emotion. When Mother Saci saw the Lord’s head without hair (a sign that He had taken sannyasa), she became distressed. She kissed the Lord and tried to observe Him carefully, but because her eyes were filled with tears, she couldn’t see. She implored Him, “Do not act like your elder brother Visvarupa, who took sannyasa and never visited me again.”

Lord Caitanya replied, “My dear mother, though I have accepted the renounced order, I shall never be indifferent to you.”

So the Lord stayed at Sri Advaita’s house for many days, conversing with Sri Advaita and other devotees by day, and at night chanting Hare Krishna in divine ecstasy. During this time Mother Saci took charge of cooking for her son. When the Lord danced in the kirtana He would jump high in the air and sometimes fall to the ground, and Mother Saci would pray that Lord Visnu would protect her son from hurting Himself.

After some days the Lord assembled all His devotees and said, “My dear friends, as long as I remain manifest I shall never give you up. Nor shall I be able to give up My mother. But after accepting sannyasa, a sannyasi should not remain at his birthplace encircled by relatives. Please make some arrangement so that I may not leave you and at the same time people may not blame Me for remaining at home after taking sannyasa.”

The devotees then approached Mother Saci with the Lord’s request. Mother Saci said, “It will be a great happiness for me if Nimai [Lord Caitanya] stays here in Navadvipa. But at the same time, if someone blames Him, it will be my great unhappiness. So here is my proposal: Let Nimai live at Jagannatha Puri. Then he will not leave any of us, and at the same time He can remain aloof as a sannyasi. Since Jagannatha Puri and Navadvipa are so close, I shall be able to get news of Nimai frequently. I do not care for my personal happiness, but only for His happiness. Indeed, I accept His happiness as My happiness.”

With these words Mother Saci gave the example for all mothers whose sons turn to genuine spiritual life. His Divine Grace A.C. Bhaktivedanta Swami Prabhupada comments as follows:

“It is a great happiness for a mother if her son does not leave home to search out Krishna but remains with her. At the same time, if a son does not search after Krishna but simply remains at home, he is blamed by experienced saintly persons. Such blame certainly causes great unhappiness for a mother. If a mother wants her son to progress spiritually, she should allow him to go out searching for Krishna. But if she does not allow her son to search for Krishna, she is called ma, which indicates maya (illusion). By allowing her son to become a sannyasi and search for Krishna, Sacimata instructs all mothers of the world. She indicates that all sons should become devotees of Krishna and should not stay at home under the care of an affectionate mother.”

Thus, except for six years in which he toured South India, Lord Caitanya stayed at Jagannatha Puri for the remaining twenty-four years of His life. Every year the devotees from Navadvipa would come and visit the Lord, bringing food cooked by His mother. Lord Caitanya would also send prasada (spiritual food) from the Jagannatha temple to His mother in Navadvipa and ask her forgiveness for His entering the renounced order. In this way, despite their physical separation, Lord Caitanya and His mother associated spiritually. And the devotees glorify their eternal relationship of mother and son by chanting, “Jaya, Sacinandana! Jaya, Sacinandana! All glories to Lord Caitanya, the joy of Mother Saci!”