Back to Godhead > Prabhupada > Srila Prabhupada Speaks Out On Darwinian Evolution

What follows is a conversation between His Divine Grace A. C. Bhaktivedanta Swami Prabhupada and one of his disciples, Dr. Thoudam Singh. It took place during an early morning walk on Los Angeles’s Venice Beach.

Dr. Singh: Your Divine Grace, are all the species of life created simultaneously? 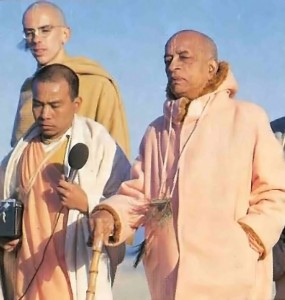 Srila Prabhupada: Yes. The species already exist, and the living entity simply transfers himself from one womb to the next, just as a man transfers himself from one apartment to another. Suppose a person comes from a lower-class apartment to a first-class apartment. The person is the same, but now, according to his capacity for payment—according to his karma—he is able to occupy a higher-class apartment. Evolution does not mean physical development, but development of consciousness. Do you follow?

Dr. Singh: I think so. Do you mean that evolution is actually the soul’s transmigration from the lower species of life up to the higher species?

Srila Prabhupada: Yes. As you get more money you can move to a better apartment. Similarly, as your consciousness develops, you move up to a higher species of life. The species already exist, however. It is not that the lower species become higher species—that is Darwin’s nonsensical theory.

Dr. Singh: And each living entity is made to live in a particular type of body according to his desires?

Srila Prabhupada: Yes. God knows the various desires of all the living entities in the material world. Therefore, to accommodate all the conditioned souls, He creates the 8,400,000 species of life from the very beginning.

Srila Prabhupada: Animals transmigrate only in one direction—upward—but human beings can transmigrate to either a higher or a lower form of life. By nature’s law, the lower species are coming up from animal forms to the higher, human forms. But once you come to the human form, if you don’t cultivate Krishna consciousness, you may return to the body of a cat or dog.

Dr. Singh: The scientists have no information that evolution can operate in either direction.

Srila Prabhupada: Therefore, I say they are fools and rascals. They have no knowledge, yet they still claim to be scientists.

Dr. Singh: One of the prominent scientific arguments is that before Darwin’s biophysical type of evolution could take place, there had to be something they call “prebiotic chemistry” or “chemical evolution.”

Srila Prabhupada: But from what have the chemicals evolved? The term “chemical evolution” implies that chemicals have an origin. And we know from the Vedic science that the origin is spirit, or life. For example, a lemon tree produces citric acid. Also, our bodies produce many chemicals through our urine, blood, and bodily secretions. So there are many examples of how life produces chemicals, but there are no instances where chemicals have produced life.

Dr. Singh: A Russian biologist in 1920 developed the idea of chemical evolution. He demonstrated that before biochemical evolution, the earth’s atmosphere was composed mostly of hydrogen, with very little oxygen. Then, in due course. . .

Srila Prabhupada: This is a side study. First of all, where did the hydrogen come from? The scientists simply study the middle of the process—they do not study the origin. You must know the beginning. There is an airplane [Srila Prabhupada points to an airplane appearing on the horizon]. Would you say the origin of that machine is the sea? A foolish person might say that all of a sudden a light appeared in the sea, and that’s how the airplane was created. But is that a scientific explanation? The scientists’ theories are just like that. They say, “This existed, and then all of a sudden, simply by chance, that occured.” This is not real science. Real science must explain the original cause.

Dr. Singh: What you have been saying completely contradicts Darwin’s theory of evolution. Darwin and his supporters say that life started from matter and evolved from unicellular organisms to multicellular organisms. They believe higher species like animals and men didn’t exist at the beginning of creation.

Srila Prabhupada: Darwin and his followers are rascals. If the higher species have evolved from the lower species, then why do the lower species still exist? At the present moment we see both the human species, with its advanced intelligence, and the foolish ass. Why do both these entities exist simultaneously? Why hasn’t the ass form simply evolved into a higher species and thus become extinct? Darwin thought that human beings evolved from the monkeys. But why do we never see a monkey giving birth to a human being?

The Darwinists’ theory that human life began in such-and-such an era is nonsense. The Bhagavad-gita says that on leaving this present body you can directly transmigrate to any species of life, according to your karma. Sometimes I travel to America, sometimes to Australia, and sometimes to Africa. The countries already exist; I am simply traveling through them. It is not that because I have come to America I have created or become America. And there are many countries I have not yet seen. Does that mean they do not exist? Any scientist who supports Darwin is unintelligent. The Bhagavad-gita clearly says that all the species of life exist simultaneously, and that you can go to any of them—that will depend on your consciousness at the time of death. If you become Krishna conscious, you can even go up to the kingdom of God. Lord Krishna explains all this very clearly in the Bhagavad-gita.