Back to Godhead > Krishna > Binding Krishna, the Butter Thief

One of Lord Krishna’s most delightful pastimes occurred when Mother Yasoda caught Him stealing butter and took a rope to bind Him. We may wonder, “Is it possible to bind the unlimited Supreme Personality of Godhead?” Yes, but a rope alone is not enough…. (From the Srimad-Bhagavatam, translation and commentary by His Divine Grace A.C. Bhaktivedanta Swami Prabhupada.) 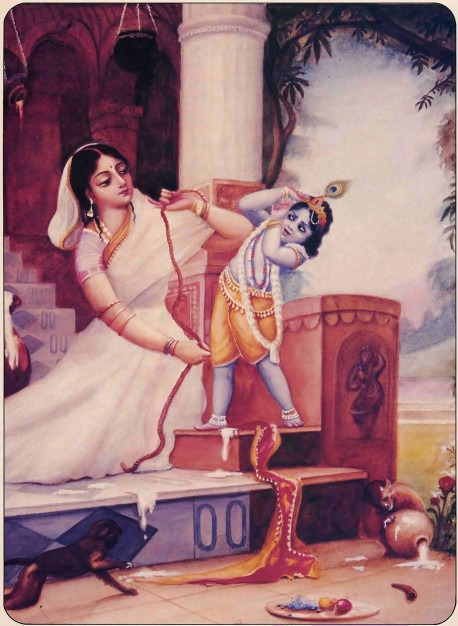 “Mother Yasoda reached her naughty child and captured Him. She then thought she would bind Krishna with a rope, to prevent Him from creating any more mischief.” Especially during the month of November, people all over India fondly remember this scene.

Once, seeing that her maidservants were engaged in various household duties, Mother Yasoda personally took charge of churning butter. And while she churned, she sang the childhood pastimes of Krishna and enjoyed thinking of her son. Her saffron sari was tightly wrapped around her broad hips, and on account of her intense love for her son, milk moistened her shaking breasts. The bangles and bracelets on her wrists tinkled as they touched each other, and her earrings shook as she labored very hard, churning with two hands. Drops of perspiration appeared on her face, and the malati flowers in her hair scattered here and there.

Before this picturesque sight child Krishna appeared. He felt hungry, and just to increase Mother Yasoda’s transcendental pleasure, He caught hold of the churning rod to stop her from churning. He indicated that her first business was to let Him suck her breast. She could churn butter later.

So Mother Yasoda took her son on her lap and pushed the nipple of her breast into His mouth. And while Krishna was sucking the milk, she was smiling, enjoying the beauty of her child’s face. Suddenly the milk on the oven began to boil over. Just to stop the milk from spilling, Mother Yasoda at once put Krishna aside and went to the oven. Left like that by His mother, Krishna became very angry. His eyes red with rage, He bit His reddish lips, took up a stone, and broke the butter pot. With false tears in His eyes, Krishna took some butter out of the pot and went to a secluded place to eat it.

Meanwhile, Mother Yasoda had set the overflowing milk pan in order and returned to the churning spot. She saw the broken pot that had held the yogurt used for churning. Since she could not find her boy, she concluded that the broken pot was His work. She began to smile as she thought, “The child is very clever. After breaking the pot He has left this place, fearing punishment.”

By following Krishna’s tiny butter-smeared footprints, she finally found Him sitting upon a big upside-down grinding mortar. He was taking butter from a pot that hung from the ceiling on a swing, and He was feeding the butter to the monkeys. When Mother Yasoda saw Krishna looking anxiously this way and that, she could tell that He was afraid of her because He knew He had been naughty. With a stick in her hand, Mother Yasoda very silently and cautiously approached Krishna from behind. But Krishna saw her coming, and He quickly got down from the grinding mortar and fled in fear.

Mother Yasoda chased Krishna to all corners, trying to capture the Supreme Personality of Godhead—Him whom even great yogis never approach in their meditations. But Mother Yasoda could not easily catch her fast running child, because her heavy breasts overburdened her thin waist and slowed her down. Still, she tried to follow Him as quickly as possible, and as she ran her hair loosened and the malati flowers in her hair fell to the ground.

Although she was tired, she somehow reached her naughty child and captured Him. Krishna admitted to being an offender, and His eyes became restless from fear. He was just on the point of crying, and He rubbed His eyes, smearing His black eye ointment all over His face. Then, as Mother Yasoda looked upon Krishna with great love, she mildly chastised Him.

But Mother Yasoda saw that Krishna was unnecessarily afraid. Being the topmost well-wisher of her child, she thought, “If the child is too fearful of me, I don’t know what will happen to Him.” So Mother Yasoda threw away her stick.

Then she thought she would bind Krishna with a rope, to prevent Him from creating any more mischief. Of course, no one can actually bind the Supreme Personality of Godhead, who has neither inside nor outside, nor beginning nor end. He is unlimited and all-pervading. Indeed, He is Himself the whole cosmic manifestation. Still, Mother Yasoda was thinking that Krishna was her tiny child; she did not know that He had no limitation. Thus, although Krishna is far beyond the reach of any restrictions, she endeavored to bind Him up to the wooden grinding mortar.

But when she tried to bind Him, she found that the rope she was using was too short—by two inches. Mother Yasoda gathered more ropes from the house and added them, but again she found the same shortage. In this way she connected all the ropes available in the house, but when the final knot was added, she saw that the rope was still two inches too short! Astonished, Mother Yasoda smiled and thought, “How is this happening!”

While attempting to bind her son, Mother Yasoda became tired. Her whole body became covered with perspiration, and the remaining flowers in her hair fell to the ground. Seeing His mother’s labor, and being compassionate toward her, Krishna then allowed Himself to be bound up by the ropes.