Back to Godhead > ~Featured~ > King Ambarisa and the Great Yogi

King Ambarisa and the Great Yogi

From the Srimad-Bhagavatam, translation and commentary by His Divine Grace A.C. Bhaktivedanta Swami Prabhupada (Adapted by Navayauvana dasa) 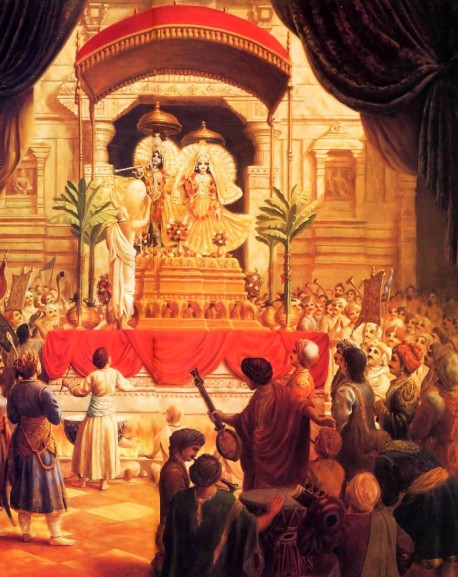 King Ambarisa was famous as a pure devotee of Lord Krishna. “But why,” Durvasa Muni wondered, “should people respect him more than a great mystic yogi like me? I will teach him a lesson. . . .”

King Ambarisa was a greatly celebrated rajarsi (saintly monarch) who lived millions of years ago, during the Age of Truth. He presided over a royal household with many wives, children, friends, and relatives. He also possessed many elephants, chariots, horses, jewels, ornaments, garments, and an inexhaustible treasury. Yet amazingly, he was not the least bit attached to all these opulences—because he had completely given up the desire to use temporary material things for flickering sense enjoyment. So rather than abandon his opulences, he accepted everything for serving Lord Krishna in devotion.

Yet despite his full absorption in transcendence, King Ambarisa did not neglect his worldly royal duties. Rather, he acted as an ideal God-conscious head of state and never issued a single order for his own selfish enjoyment. He saw Krishna, the Supreme Personality of Godhead, as he ultimate enjoyer of all his endeavors—political, social, economic, cultural, and religious—and he always offered the results of his activities to Krishna. A perfect devotee, the king acted with full knowledge of Lord Krishna’s words—and full faith in them. And since King Ambarisa’s subjects followed his example of hearing and chanting about Krishna, everyone was naturally peaceful and prosperous. To satisfy the Lord even further, the king organized huge Vedic sacrifices and offered Him the best of everything. As a result, climatic conditions were ideal. Rain was plentiful, and even desert areas flourished.

Just to satisfy the Lord, King Ambarisa and one of his queens once observed a year-long vow of austerity. After observing that vow for the prescribed year, King Ambarisa fasted for three days and bathed in the River Yamuna. Then, with great attention and care, he worshiped the Deity of Krishna with fine incense, flowers, flaming lamps, and other items. Finally, he gave gifts in charity to satisfy all the guests who arrived at his palace. To the brahmanas he gave innumerable cows with gold-plated horns and silver-plated hooves. Afterward the king sumptuously fed all the brahmanas, and when they were fully satisfied, he prepared himself to end his year of austerities by breaking his fast.

Just then the great and powerful mystic Durvasa Muni unexpectedly appeared on the scene. After standing up to receive him, King Ambarisa offered him a nice seat and humbly requested him to dine. Durvasa gladly accepted, but he first wanted to bathe in the River Yamuna. There he waded into the water and became absorbed in trance.

Meanwhile, only a few minutes remained before the auspicious time for King Ambarisa to break his fast would elapse. The king became anxious. On the one hand, he knew that if he didn’t break his fast during the prescribed period, the vow’s effects would be lost. But on the other hand, he also knew he would commit a great offense if he ate before Durvasa returned. To resolve this dilemma, King Ambarisa quickly consulted his learned brahmana advisors and reached a decision: he would break his fast by drinking a little water only since drinking water may be accepted as both eating and not eating. 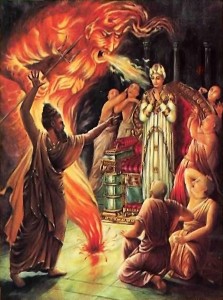 His face flushed and twisted, the yogi, Durvasa Muni, conjured up a demon to kill the king, Maharaja Ambrisa.

After sipping some water, the king meditated on the Supreme Personality of Godhead within his heart and awaited Durvasa Muni’s return. When Durvasa returned from the river he could understand by his mystic powers that King Ambarisa had drunk water without his permission. Hungry and trembling in anger, Durvasa Muni chastised the king, who stood before him with folded hands. “Alas, just see the behavior of this cruel man—considering himself God, he has transgressed the laws of religion! King Ambarisa, you have invited me to eat as a guest, but instead of feeding me, you yourself have eaten first! Because of your misbehavior, I shall create something to punish you!” 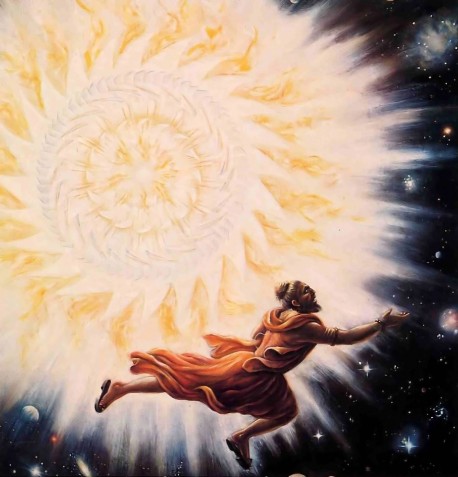 As the blazing flames of a forest fire pursue a snake, the disc of the Supreme Personality of Godhead began following the yogi, Durvasa Muni.

Suddenly, with his face flushed and fiercely twisted, Durvasa uprooted a tuft of hair from his head and created a demon resembling the blazing fire of devastation. That frightful creature carried a trident in his hand and shook the surface of the earth with his footsteps, and now he was coming before the king to kill him! But King Ambarisa remained supremely placid and did not move even slightly. He was totally unafraid of death, for he was simply absorbed in thinking of Krishna in the core of his heart. The king didn’t even consider asking the Lord for protection. But Lord Krishna well knows how to protect his devotees. Immediately He sent His personal weapon, the Sudarsana disc, to rescue the king. And as a forest fire quickly burns an angry snake to ashes, so the blazing Sudarsana disc did away with the demon.

Upon seeing that his attempt to kill King Ambarisa had failed—and that the Lord’s Sudarsana disc was rapidly moving toward him—Durvasa Muni became very frightened and fled. By his mystic powers he fled everywhere—to the sky, to caves, to the ocean, even to the heavenly planets—but wherever he went he felt the unbearably hot Sudarsana disc following close behind him. Finally, by an inconceivable yogic perfection he crossed beyond the covering of the material universe and entered one of the planets in the self-effulgent spiritual sky. Still feeling the Sudarsana disc’s scorching heat, Durvasa Muni fell at the lotus feet of the Supreme Lord, Narayana (Narayana means “Krishna, the shelter of all living beings”).

As he spoke Durvasa once again trembled—this time in great fear: “O infallible, unlimited Lord! O protector of the universe, I am a great offender. Please give me protection.”

However, Lord Narayana told him, “O brahmana, I cannot act independently, for I am completely under the control of my pure devotees. Since they give up their homes, wives, children, relatives, riches, and even their very lives simply to serve Me, how can I ever give them up? The pure devotee is always within the core of My heart, and I am always in the core of My pure devotee’s heart. Indeed, My devotees do not know anything but Me, and I do not know anyone but them.

“O brahmana,” the Lord continued, “now let Me advise you what to do to escape danger. Please listen closely. When employed against My devotee, one’s so-called prowess inevitably harms him who employs it—so by offending King Ambarisa you have acted against your own best interest. Therefore, you should immediately go to the king and beg his forgiveness. Do not delay even a second! If you can pacify him, then there will be peace for you.”

Still feeling very much harassed by the Sudarsana disc, Durvasa Muni immediately left Lord Narayana and retraced his flight back to earth. Upon reaching King Ambarisa’s palace, he quickly entered the main hall, fell down, and clasped the king’s lotus feet. When Durvasa touched his feet, King Ambarisa felt ashamed and aggrieved, and out of deep compassion for the sage he began praying to the great weapon of the Supreme Personality of Godhead.

“O Sudarsana disc, I offer my obeisances unto you. You are fire, you are the most powerful sun, and you are the moon, the master of all luminaries. You are religion, you are truth, you are the maintainer of the entire universe, and you are the supreme transcendental prowess in the hands of Lord Krishna. Your very name—Sudarsana—indicates that you serve as the Lord’s auspicious vision. You have created everything by your activities, and therefore you are all-pervasive. O protector of the universe, the Lord has engaged you as His allpowerful weapon in killing the envious enemies. Yet, for the benefit of our entire dynasty, I pray that you kindly favor this poor brahmana. If the Supreme Personality of Godhead, who is one without a second, who is the reservoir of all transcendental qualities, and who is the life and soul of all living entities—if that Supreme Lord Krishna be pleased with us, we wish that you free the suffering Durvasa Muni from your searing heat.”

The king’s humble prayer pacified the Sudarsana disc, and he stopped burning Durvasa Muni. Deeply grateful, Durvasa began to praise King Ambarisa: “My dear king, today I have experienced the greatness of Lord Krishna’s devotees—for although I greatly offended you, out of mercy you have overlooked my offense and prayed for my good fortune. O king, I am very much obliged to you.” 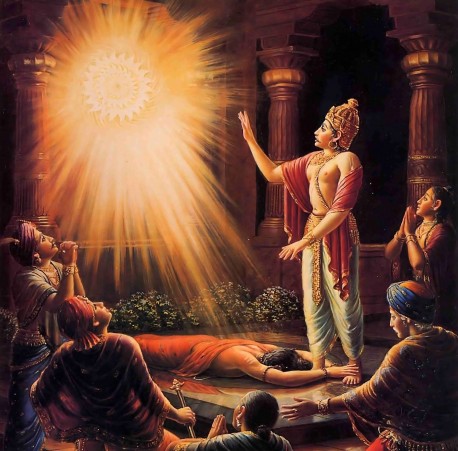 Very much harassed by the Sudarsana disc, the yogi Durvasa Muni retraced his flight back to earth. Upon reaching King Ambarisa’s palace, he quickly entered the main hall, fell down, and clasped the king’s lotus feet.

While awaiting the return of Durvasa Muni, the king had not taken any food, but had maintained himself simply by drinking water for one whole year. Now the king still did not eat. Instead, he fell at Durvasa’s feet and fed him all varieties of delicious food. After eating, Durvasa Muni was so satisfied that with great affection he requested the king to eat also. “Please take your meal,” said Durvasa. “I am very pleased with you, my dear king. At first I thought of you as an ordinary human being and accepted your hospitality, but now I see that you are the most exalted devotee of the Lord. Therefore, simply by seeing you, touching your feet, and talking with you, I have been pleased and have become obliged to you. All the people of this world will continuously chant the glories of your spotless character.”

In this way Durvasa redeemed himself. True, his mystic perfection was like a valuable jewel, but he had misjudged the position of Krishna’s devotee and had acted enviously. Durvasa Muni was like a snake—and a snake with a valuable jewel on its head is just as dangerous as one without such a jewel. But in the end Durvasa came to realize the true position of the Lord’s devotees and praised both them and Lord Krishna Himself. Thus he became fortunate.

Like Durvasa Muni, many of the present-day opponents and critics of the Krishna consciousness movement have high qualifications (learning, beauty, wealth, influence). But they are just like serpents with jewels on their heads—because they misjudge the position of Krishna and His devotees and act enviously. Yet if, like Durvasa, these people at last use their high qualifications in Krishna’s service, they too will become glorious. If they refuse, no power on earth will be able to save them from ultimate destruction.

2 Responses to King Ambarisa and the Great Yogi