Back to Godhead > ISKCON > News > Every Town and Village: Fiji Welcomes a Dancing Krishna

Every Town and Village: Fiji Welcomes a Dancing Krishna 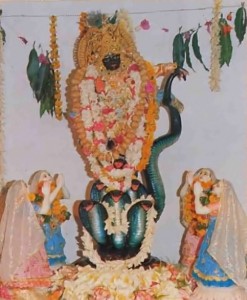 Main Deity: Krishna dances upon the heads of the Kaliya serpent, whom history relates He banished to Fiji.

There’s a striking new landmark in Lautoka, the second largest city in the Fiji Islands. It’s the Krishna-Kaliya temple, opened last August 28 by the International Society for Krishna Consciousness. With three glittering, gold-plated spires atop huge white domes, the new building is the largest Krishna temple in the South Pacific—and the first in Fiji. The temple has three spacious altars, in which thirteen exquisite Deities receive worship. ISKCON craftsmen at the Los Angeles center designed and molded the Deities and then shipped them fifty-five hundred miles to the Fiji temple. The main Deity is Krishna, who dances upon the heads of a serpent named Kaliya.

The new temple will serve as a cultural and religious center for the three hundred thousand Fijians of Indian descent, who make up more than half the nation’s population and play a prominent role in its social, economic, and political life. Of course, the temple will also attract many non-Indians as well. In fact, the Fiji Sun reported that Fijians of all races participated in the opening ceremonies in huge numbers.

About the new temple His Divine Grace A.C. Bhaktivedanta Swami Prabhupada has written this: “Everyone in Fiji should take advantage of this human life by regularly visiting this temple and making his life perfect. Krishna consciousness is not at all difficult. Everyone can come and offer obeisances to Krishna, chant Hare Krishna, and take Krishna prasada [vegetarian food offered to Krishna]. The temple is open to all.”

The temple’s main sponsor is local businessman Deoji Punja (Vasudeva dasa), whom Srila Prabhupada initiated as his disciple in 1976. While visiting Australia early in 1974, Mr. Punja had dropped in at the ISKCON’s Sydney temple and had come away deeply impressed with the devotees—especially with their authentic Deity worship, and their strict adherence to the Vedic way of life. Later in 1974 Mr. Punja had met Srila Prabhupada in Fiji and promised to organize the construction of an ISKCON temple there. Mr. Punja had long felt an urgent need to restore the fast-fading Vedic culture among Fiji’s Indian population. He concluded that this would be possible only with the help of Srila Prabhupada—the world’s foremost representative of India’s Krishna conscious heritage. Recently Mr. Punja pointed out that in the past many unscrupulous so-called swamis and gurus “came from India and went so quicklyas soon as they had collected their money from our pockets they were gone, and no one was any better.” 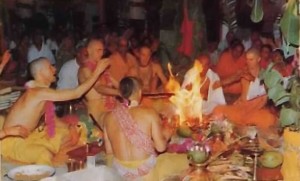 Mr. Punja donated a choice site in Lautoka, and the local Indians united to build the temple there. In May of 1976 Srila Prabhupada himself came to Lautoka to lay the foundation stone. Now completed, Fiji’s first Krishna temple is already functioning as the focal point of the revival of Vedic culture in Fiji. The local ISKCON devotees are popularizing the reading of Krishna-conscious literatures such as the Bhagavad-gita in all of the island’s major languages. The devotees are also building a school to train children of all races in the principles of God-conscious spiritual life, and they are organizing a Vedic farm community to counter the trend toward materialistic, over-urbanized civilization. In addition, the devotees are distributing thousands of strings of chanting beads—to make chanting Hare Krishna a national pastime.

The Krishna-Kaliya temple gets its name from a famous encounter between Lord Krishna and the hundred-headed serpent Kaliya, in Vrndavana, India. Kaliya once entered the waters of the River Yamuna and began to kill the people and cows with his poisonous fumes. Krishna defeated the serpent by dancing on his heads, and as history relates, He banished him to Ramanik—present-day Fiji. Interestingly, the natives of Fiji have long told of a huge multiheaded serpent hiding in a lake in the island’s interior.

German Ph.D. Acclaims Bhagavad-gita As It Is

Dr. Parameshwara Aithal of the University of Heidelberg’s Institute of South Asian Studies recently sent us this assessment of the Bhagavad-gita As It Is.

“For a proper understanding of India’s spiritual heritage, the Bhagavad-gita has been well recognized as the authoritative and authentic source book. Although there exist innumerable editions of the Bhagavad-gita—in both Indian and Western languages—few of them satisfy the needs of a modern, seriously inquiring reader, particularly of the West. Most are too superficial, failing to impart the profound knowledge hidden in the text. Having taught the Bhagavad-gita over the last twenty years, I have always felt the necessity of a more satisfactory edition. I am glad to note that A.C. Bhaktivedanta Swami Prabhupada’s edition of the Bhagavad-gita As It Is completely fills this need. I am sure that this valuable edition will prove to be of great help in imparting to any reader the transcendental knowledge of Krishna consciousness and of India’s past. I would recommend to it anyone who seeks truth and spiritual knowledge.”